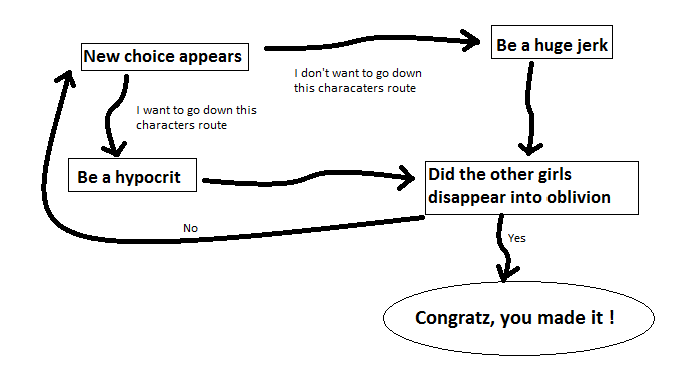 You know ? These text boxes that you clic and who guide you towards an end rather than another.

I've always wondered why we are given that false sense of liberty, because in the end, you'll complete the entire game and go through all the route, won't you ?

Would that mean that they are only relevant during your first playthrough, is your first route run down the true experience of actually playing a game ?

I don't think so, it's pretty random.

First reason being you don't always go down the route you want to despite trying your best to.

If you've been to nice to girl A and triggered her route, either going for girl B is useless, or the game won't even let you. Ah, dark memories of me trying to go for Rin without a walkthrough... it's too hard not to be nice to Lily !

Second reason, maybe you'll just happen to get a shitty route, you know, it happens ... sometimes ...

And that's only possible when you have the choice to go for what you want.

Yeah, it's an unspoken rule in Visual Novels :

- losing your time cause it's unlikely it's even reachable.

- losing your time cause it's unlikely that it's easily reachable if it is.

- doing it wrong, cause it's unlikely you'll like the game if you learn the most important stuff at the beginning.

I'd advise to go crescendo, when you have the choice, and this is where it becomes problematic. What seemed at first like you controling the fate of your character is actually you being guided by the story.

A Visual Novel is not a dating sim, so you do not build your character and do not have any influence on his personnality, but then why does the game give you choices in the first place ?

When the system is too easy, we wonder why it's even there, when it's too complicated it's a pain to play, then why ?

But let's turn the question on its head, would Visual Novels still be as entertaining and good without these choices ? Lets remember than they are not a vital core of the genre. For example, Umineko has no choices, you're just reading, watching and listen but do not play.

Personnaly, I view them as something that adds dynamism to the whole thing. Like a goal to reach, some kind of check point. My, my the happiness of finally chosing after going through hours of fluff *cough* Grisaia * cough*.

Or maybe it's just what makes VNs games rather than image books.

These where my spontanious cloudy thoughts. Feel free to give your impressions.

Will be edited when I get more ideas