Foreword: Whenever a war story is covered, I always expect something like Saishuu Heiki Kanojo anime story. But in fact Gunjou no Sora o Koete is a normal charage in an unusual setting. There are enough good English reviews (1 2 3 4 5 6), so address them for a more favorable review. Game does not live up to my expectations, so I can't stop being critical about it. 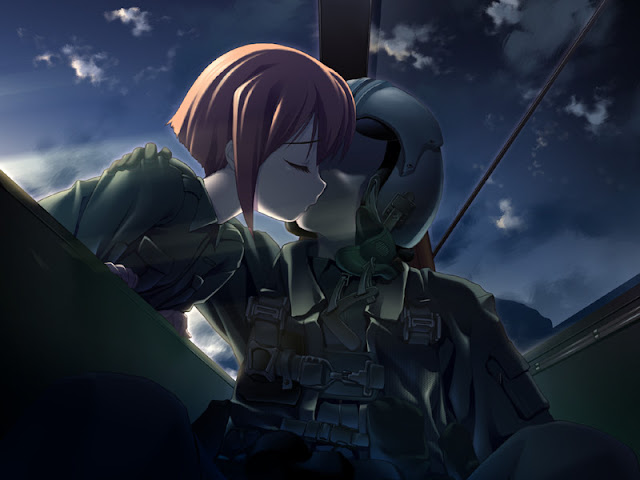 Synopsis: You start off as Yashiro, one of the two first rank students in a flight combat school maintained by the army. Japan is split into two factions and the situation is tense, with small battles being held here and there.

His father was the one who caused the entire splitting up and tense situation, with the proposal of some yen economic plan.

Life isn’t exactly as easy as normal school life over there, with it’s hardcore training. Still, he still manages to talk with friends and just act like a somewhat normal guy of his age should act.

But things never go right. Rumors have that a war is starting. That means he’ll have to go out to the frontlines as a pilot killing people. Can he save what his father has caused or can he even survive till the end of the war? 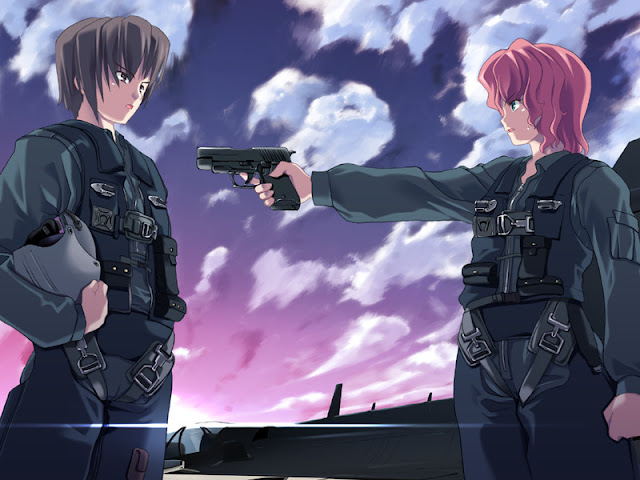 First of all, why a story about war take part in a school setting? It's really just a normal school SOL with some occasional flights. Even uniforms are nothing military! Damn, there is even culture festival in-between the deadly flights! There is no shortage of school settings, so this fact can not but irritate.

Next, all characters are voiced, including male characters. But pretty much till the very end of the first route I could not understand who is the protagonist here. Yashiro is just one of male students in here, and he is not focused at all. There is a male instructor with the eye trauma. He's a cool mature guy, and he's the only guy that does not have a sprite. I seriously thought he was the protagonist in here. Only he would be suited to be in relations with the instructor Miki. But there is also Toshiharu boy pilot. There are enough scenes of Toshiharu private dialogues with girls. So it all moves in a messy state till sudden resolution that it's definitely only Yashiro who plays the main part. And I just don't like him, he's nowhere near normal adult level. 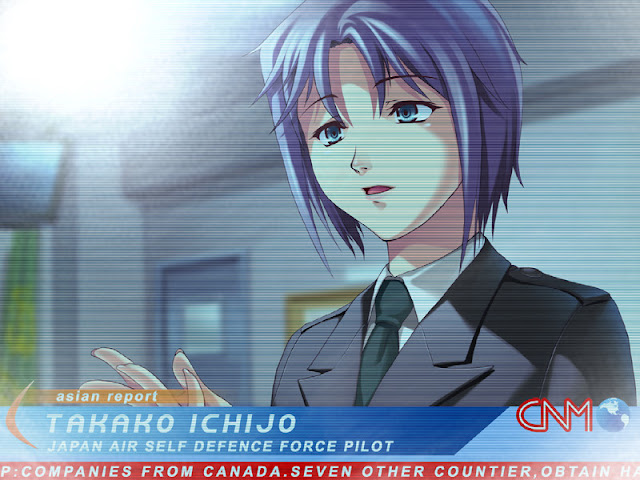 Well, heroines... There are three main heroines, plus two side heroines. Instructor Miki is the only really fine heroine here. Wakana disappoints a lot with her initial tsundere attitude instantly vanish after boy's return from the flight. Kanako is just horrible as a heroine, as she combines both naive + whiner parts. The side heroines are hardly given enough time, they feel like an excuse to throw in more and more H events.

The whole independence war of Kanto against Kansai looks pretty ridiculous. Kanto leaders are in the worse position, but they are pretty much pacifists (what?!). They refuse to shoot directly at planes' cockpits and prepare any serious assault moves. All they can is defend and hopefully make some kind of success to get an advantage at negotiations. This is a full-scale civil war, but despite the war being "flashy" there has been next to none fatalities, some dozen of pilots. Characters themselves compare this number with 10,000 traffic fatalities and 35,000 suicides happening each year and agree that it's almost bloodless war. And I still don't understand how it correlates with the throwing bombs from planes. I'd never believe that all these boy pilots are super precise professionals who only aim at inhabited military objects. But we finally enter this war and witness the breakthrough, right? Nope, we just lose. WTF?! Really, after the first defeat we just surrender with all heroes facing trial. What kind of masochistic game is that? Game ends without really starting. But it's very convenient to show a tragic resolution with each heroine. But luckily there this GRAND True End that mends things and shows the true battle, right? Nope. Can only say that there are NO fights in there and there is nothing but hope projected. It all feels really half-baked. 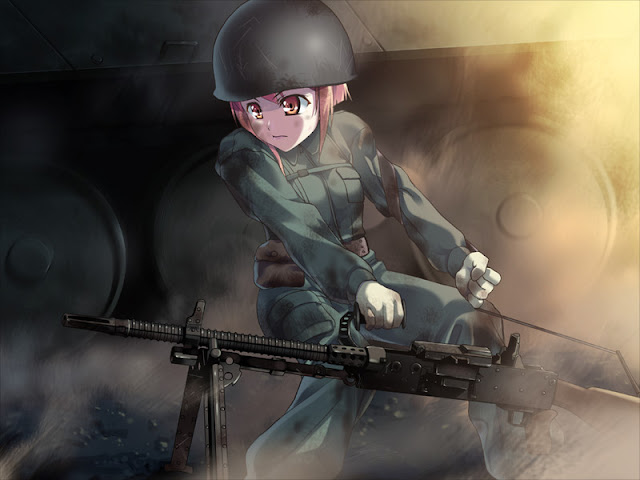 Characters just show off to appear cool. Instructor Miki tries to drill students ... for like 5 minutes, then turns into deredere... Wakana is really tsun at the beginning, but becomes dere after first boy return from the flight. Everyone likes to beat sense into each other and remind about death. It's really depressing when people discuss really grave matters in a forced cheerful voice through tears. Moreover, when these children board the aircrafts, they start to speak only in English and repeat huge rows of senseless numbers... and it's a very horrible crumbled English, as ever. All to appear cool and shock Japanese players. For English speakers it looks ridiculous.

Well, as one of reviews states, Gunjou no Sora o Koete is not recommended for people who want action, people who hate depressing stories, people who want simple stories, people who want the protag to be a “hero”. But game is good in presenting a detailed realistic setting and in telling tragic human stories. Basically, game should be called a nakige or even utsuge and evaluated based on that genre. If we look at it this way, it's definitely a masterpiece. And since it focuses on human stories, there is no just one protagonist, all side characters are equally important for the narration. Political dimension can also be a motivation to read this visual novel. Still, you won't lose anything by skipping Gunjou no Sora o Koete, it's a niche product rather than breakthrough in the medium. 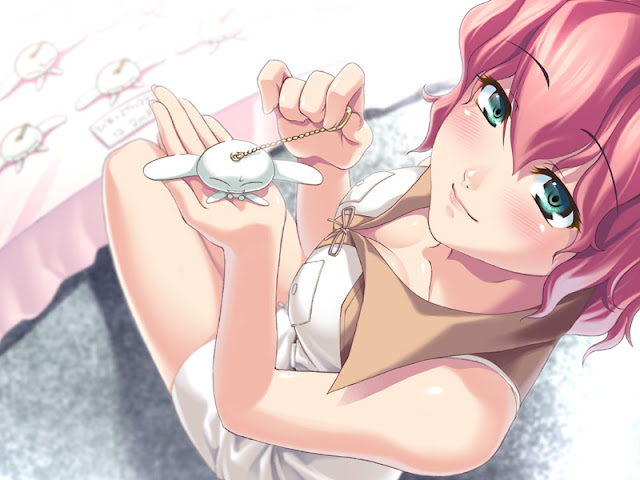