Foreword: I only had to choose this game, because the only other somewhat curious game from April 2005 Gakuen Kaiketsu Kururi! turned out to have a horrible engine for auto-reading with voices getting constantly cut even with the latest patch, at least with win10. I want to ask sincere forgiveness from all those who like vanilla pure love visual novels. Depending on your likes, game can get even couple points more in the overall evaluation. I'm only conveying my sincere impression of this game even though I'm ill suited for that purpose. 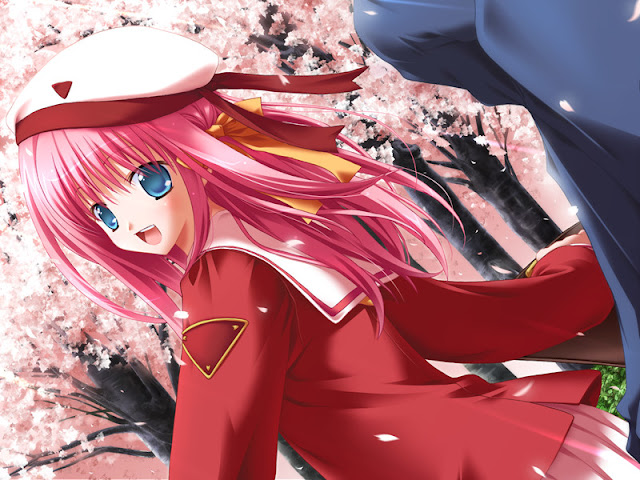 Synopsis: Protagonists name is Kaoru, it is a name used for girls normally, he has no idea why his parents decided to name him like that. And just because of that when he was changing schools he gets enrolled to a girls high school by mistake. Unhappy with this turn of events at first, he soon grows to like the new school.

It's insufficient to say that I did not like this game. It was a torture that is painful to remember, actually. There are so many poor elements in it that I don't even know what to start with. I'll try to focus on positive sides in conclusion as well, though. Game quality gets a penalty for poor heroines design, lack of CG and occasional lack of voicing. 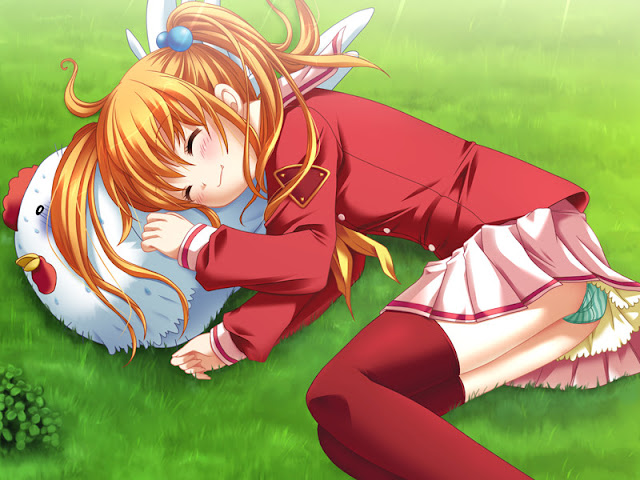 The setting is kind of stupid and oh-so-super-convenient.

2). Kaoru is the only boy on the entrance ceremony, but he stays there till the end and gives out his voice like everyone else. That's ok, boy's probably confused.

3). He wants to transfer to the nearby normal school, but he is not allowed to by that school. Girl's school does not force him out. Well... that's weird behavior on behalf of girl's school, but maybe they did not want to ruin boy's school year during the already started term. Really stupid, but ok.

4) Kaoru is denied dormitory room in the normal school dormitory, so he pretty much becomes a homeless bum. Hinako asks him to make her a company on her way to girls' dormitory. It's strange that school authorities have no concern for boy's living space in such an extraordinary situation, but overall feels almost natural.

5) Hinako asks girl dormitory caretaker to look for a room for Kaoru to stay for one night. But all rooms are taken, so Hinako asks dormitory caretaker to have Kaoru share a room with her. Wait a minute, that's just super wrong. The fact that caretaker girl so eagerly agrees with the condition that divider should be set at the center of the room is increasingly alarming. In reality half of girls would be against that, but no one seems to ask their opinion at all considering the fact that there are no facilities for men in the dormitory.

6) So Kaoru starts to live at the same room with Hinako. Wait, what the hell? Did not he want to find a normal place the next day? What happened with the allowance to stay for just one night?

7) Pretty much the very first day Kaoru relaxes at the bathroom and encounters naked Hinako going to take a shower. REALLY? Freaking boy is allowed to stay for one night and he just occupies a huge bath all by himself without noticing anyone and locking the door? There's total irresponsibility at all levels in this dormitory.

8 ) Kaoru and Hinako set alarm clock for 8 o'clock, but only Hinako is able to wake up on time. She has to trespass to the other side of the room in order to wake Kaoru up. The decision to allow or not allow Hinako to get to this side of room in the future determines whether we enter Hinako or other girls's routes. We already know that Kaoru is a terribly irresponsible boy, but if he actually allows Hinako to get to his side then it pretty much means that he does not care for alarm since is a person to abuse with waking him up. Ok, we get it, he's an absolute failure as a responsible member of society.

9) Roommates decide to hide the fact they live at the same room, but Hinako admits that she is pretty bad with concealing anything, because she is super-naive, and everything is written right at her face. Of course she constantly blushes, stutters and mumbles whenever Kaoru is mentioned in any context. The story gets revealed in no time, but the whole class only encourages Hinako. It looks weird to me that whatever route we enter, everyone is so supportive with any choice made. There is absolutely no room for conflict in this school, so bring in the cakes. 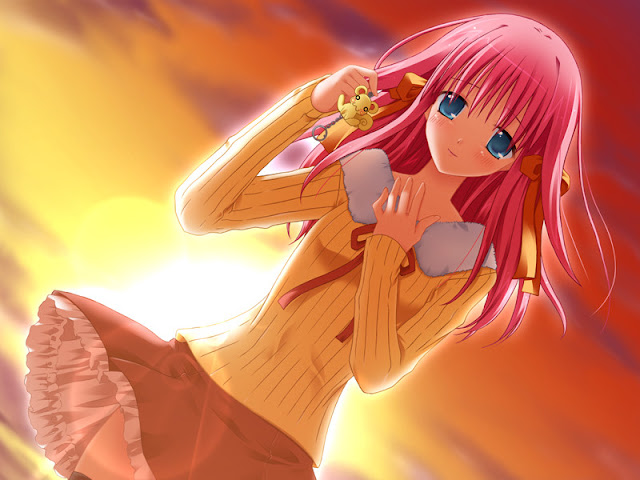 At school we meet other girls, but for some reason the only lively and sharp-tongue girl who basically moves the whole plot by playing jokes on Hinako - is not available as a heroine. Instead, we're offered absolutely isolated stereotypical random girls as heroines. For some reason, neither of the girls was able to interest me. I ended up choosing yet another super-naive and this time also a loli heroine Maria for the second heroine playthrough just because hoped for more lively CG of this small idol girl and because she is voiced by seiyu Naruse Mia in a pretty funny way. How horrible should heroines' personalities be for me to pick a naive loli girl just based on seiyu? And of course I got burned with this decision, because all the funny events of Maria were reserved for the common route. Should personal route always be so miserable to make poor kid cry for three times? I'm not even mentioning disgusting etching. Since this game is only about the looks and fuwa-fuwa atmosphere, I don't feel guilty for revealing the main drama in Maria route. And it's about Kaoru loosing sight of Maria and starting search only to find her around the corner so they could happily reunite. What the hell... 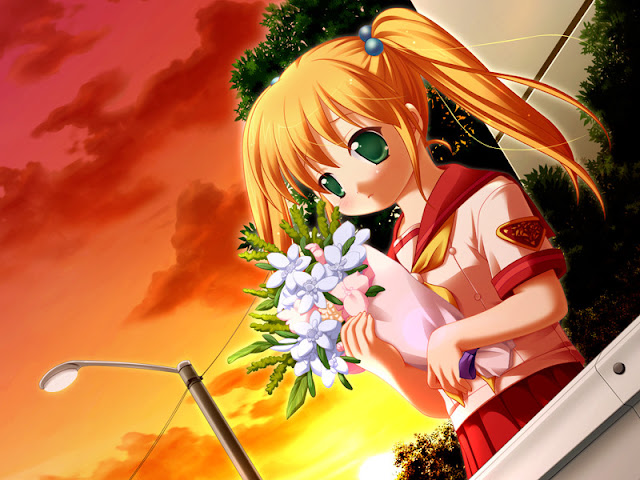 And I'm even so shameless that I want to reveal the main drama of Hinako route (because this game is NOT about drama). It's about Hinako being forces to marry an unknown man that her yakuza father has chosen for marriage. Pretty decent conflict, right? I bet Kaoru steals the bride just at the altar and marries her somewhere in the woods hiding from hired goons. But reality is so much worse. The young people just come the the yakuza father and ask him to throw away clan interests and let Hinako be with the total failure that Kaoru is. I can only guess what harsh measures yakuza father is going to undertake. Wrong guess, as usual. Father does... nothing at all? Hinako just goes to their dormitory room to spend the last time at this school. At the same room with a boy. Holy crap. Why everything in this scenario is so ridiculously stupid? Why any attempt of analysis is inevitably doom to be crushed by the wall of absolute amateurism and irresponsibility? If you possess analytic thinking, please keep out of this game. It does not succumb to any rationalization attempts. 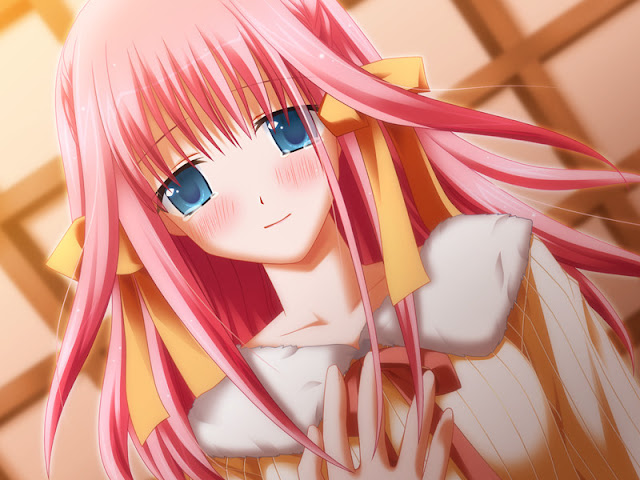 Ojou-sama Kumikyoku is not a bad game. It's a nice romantic story in inspiring atmosphere of rich and fabulous girl school. If features mild humor and supportive environment. Hinako is so innocent and straightforward that she will most probably charm you. Get your expectations within a warm romantic comedy content, and you probably won't be disappointed. It's a pure coincidence that such romcom genre hater as me got to play this game. 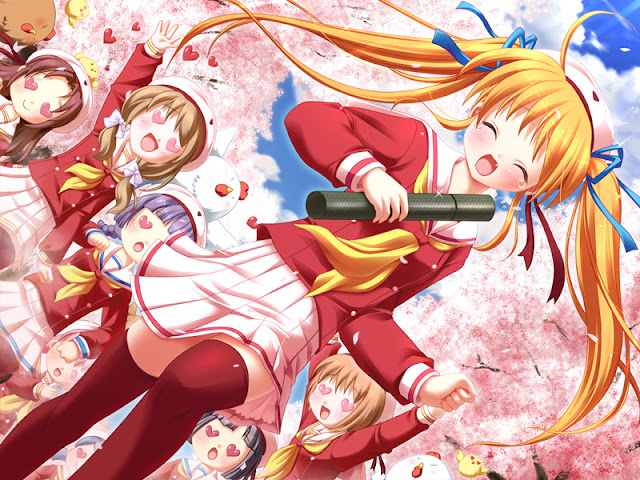