In my never-ending journey through the world of EVNs, I often happen to stray away from the more mainstream titles or things explicitly sent to me for review, and into the world of extremely niche games published by countless small-time developers, either for one of the many VN-related game jams or for no reason in particular. While most of them end up being unremarkable, many others turn out to be diamonds in the rough, showing really promising elements and fresh ideas, but being brought down somewhat by their small budgets and lack of polish. Rarely, I find really excellent and memorable titles, that are able to overcome their limitations through thanks to their author’s creativity and storytelling prowess – and while they are definitely worth writing about, they’re usually also small enough that they don’t fit into most of the formats I’ve used so far. For this reason, this new series will be dedicated to such games: mostly unknown, short EVNs that I’d love to see receiving more attention. And my first picks are three excellent, freeware games by the secretive developer working under the name Ludeshka: Hierofania, Hierofania 2 and Rhyme or Reason.

Probably the most unique aspect of Ludeshka’s games is her art, which feels heavily inspired by expressionism. Rough, often slightly deformed shapes and exaggerated or unnatural colours seem to match the emotional aura of the characters and the climate of the scenes she portrays, rather than present them in a realistic manner. Often her illustrations are not something you would call pretty in the conventional sense, but their striking features give her VNs a lot of personality (particularly when combined with the grim storylines of her “flagship” titles, Hierofania 1 and 2) and it’s hard to ignore their artistic merit. The distinct artstyle is closely matched by the surprising and interestingly-structured plotlines – those, however, will be best to deal with one by one. So, please join me in this short overview of Ludeshka’s work, as I explain why it offers a lot more than you might expect at first glance. 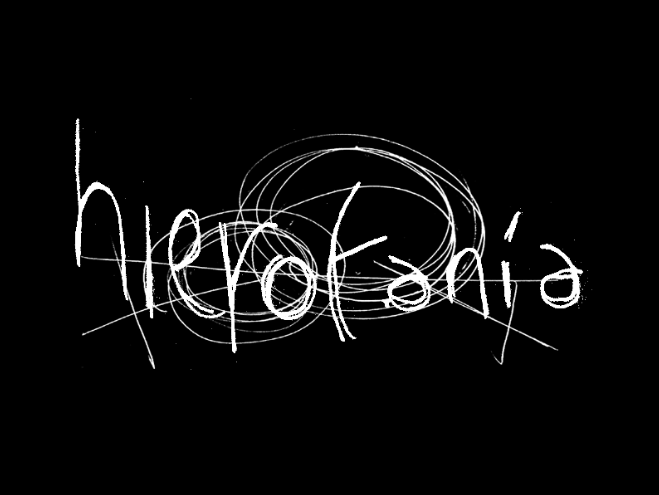 Hierofania is the tale of Crocket, possibly the last trainee in the dying order of Knights of Utrecht. Ten years after their god stopped manifesting and the magic powers he blessed his disciples with disappeared, only a handful of Knights remained, still clinging to their ancient creed. When a mysterious stranger, chased by the clerics of another deity for the crime he claims he didn’t commit, appears at one of Knight’s remaining strongholds and asks for help, Crocket is sent on a mission to prove his innocence – one from which few expect her to came back alive.

I won’t hide that I find the setup and climate of Hierofania absolutely fascinating: the game is short, with around 3 hours of content, but manages to establish a cohesive setting that brilliantly subverts some common fantasy tropes. Be it Crocket, a naïve disciple of a dead religion who still believes that her faith will one day be rewarded with a miracle. Be it her captain, who gouged his own eyes in a gruesome ritual, one that was once a source of great power granted by his deity, but now simply made him a cripple. Or be it the stranger, who obviously holds some dark secrets, but the severity of which is hard to imagine before they’re revealed by himself in the bad endings… It’s hard to find a major set piece in this story that doesn’t feel captivating and the striking visual design only makes everything more intriguing. The short plot didn't make it possible to explore this world to the fullest, but the whole experience still feels extremely fresh – and that’s something you rarely get reading your 200th+ EVN.

If I was to complain about something in Hierofania, it’d probably be the choices – they’re quite often cryptic or feature options very similar to each other, so you can’t really predict their consequences and usually have to unlock alternative endings through pure trial-and-error. This is something of a recurring theme in all of Ludeshka’s games and negatively impacted my experience with them, as I simply dislike this kind of confusing story structure. Still, it was a relatively minor issue in all these cases, and in the first Hierofania and Rhyme or Reason, the choices at least weren’t numerous enough for them to become frustrating mazes. So, I still highly suggest giving Hierofania a chance – with all its limitations, it’s an utterly unique story that will inevitably leave you with a strong impression. 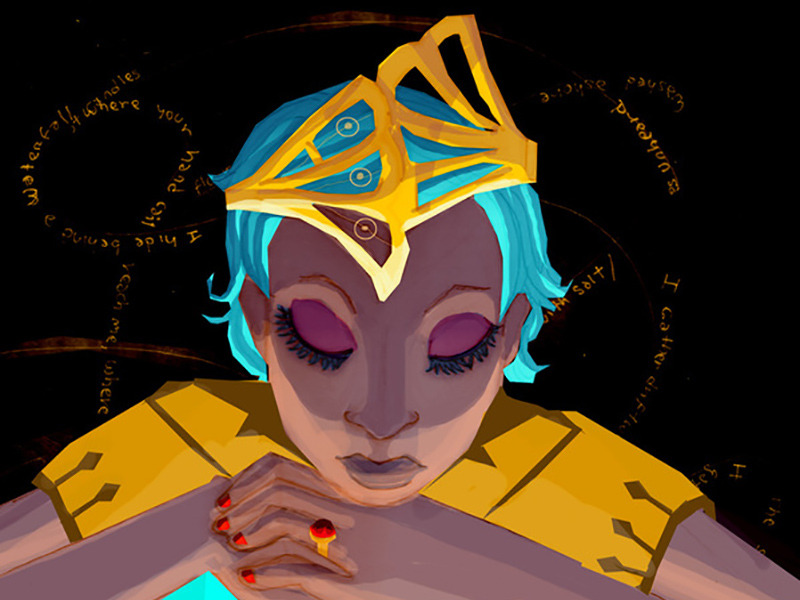 Herofania 2 might seem like a repeat of certain themes from the first game, starting with a death of a goddess and despair of people deprived of her blessings, but ultimately tells a very different story, only loosely connected to the one from its prequel. It also offers a lot more significant branching, more visual assets (including simple animations) and a better sense of player’s control over what happens in it. It follows the story of Caramela, a young queen of a small fishermen kingdom of Currents. After her lands and her own family were ravaged by a mysterious plague a decade earlier, she ended up receiving the crown while unprepared for ruling and became dependent on her regent Senteltje, a man with a dark reputation and a history of conflict with the deceased queen. With the Kingdom devoid of its patron deity, the Sea Goddess also killed by the mysterious disease and a war raging between its neighbours, Caramela will be forced to finally choose a path for herself and her country.

The game is an overall improvement over the first Hierofania, both in its production quality and its storytelling, but above all, maintains all positive qualities of its prequel. The characters are immediately memorable and interesting, the story is engrossing and develops in directions that are never banal or easy to predict. Caramela herself is a much more complex character than Crocket, quickly growing beyond the first impression of a spoiled and disinterest noble, content to let others take the burden of ruling. While how much agency she’ll ultimately have is heavily dependent on player’s choices, there’s a surprising variety in how her story can be resolved, without any obvious “good” or “bad” outcomes – in politics things are rarely black and white, and even conclusions such as Caramela forever staying Senteltje’s puppet is not necessarily bad for her or for Currents. One of the more decisively-positive endings can be considered the canon one, as it rewards you with a short epilogue connecting the story directly with the events of the first game, but this feels more like just an excuse to tease the overarching plot, which was meant to be resolved in the third entry in the series. Ultimately, Hierofania 2 is a story that stands very well on its own and lets you take away from it whatever you wish – and this makes it that much more worth reading. 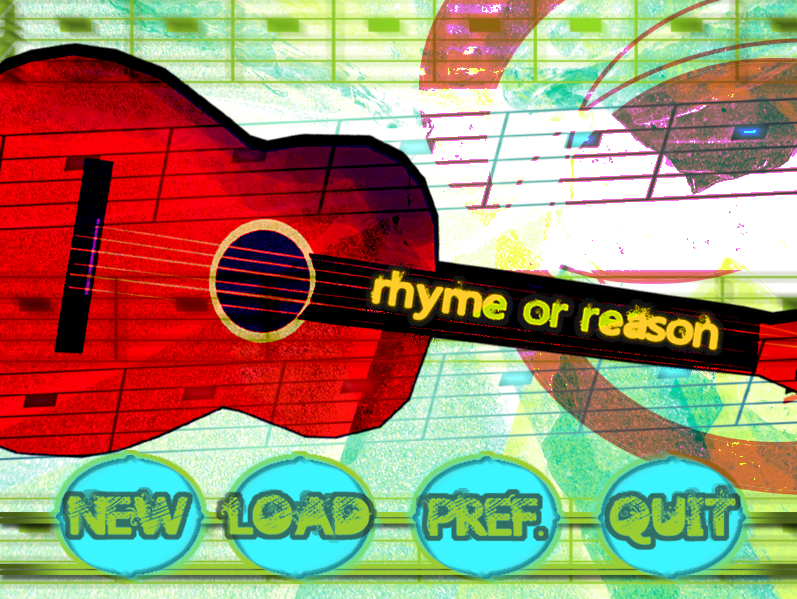 Rhyme or Reason, released by Ludeshka between Hierofania 1 and 2, was an attempt at creating a more traditional romance VN and diversify from the fantasy drama driving the author’s main project. It’s a short game, with around 2 hours of content, following the story of Rhyme – a protagonist whose face and gender are never shown, but who still manages to show a set of interesting characteristics. They’re an aspiring singer and songwriter, passionate about their work, but also too demotivated by their tedious life and self-doubt to really chase their dreams. What has a chance of changing this sorry state of affairs is an invitation from protagonist’s close online friend, Karen, to stay for a week at her house, in a scenic small city by the ocean. After getting there they immediately meet Nancy, a somewhat-overwhelming aspiring singer, who’s in the middle of a desperate search for a guitarist for her band – the previous one disappeared, just before a major gig. Depending on the way you navigate this situation, it can lead you to 6 different endings, including two romantic conclusions featuring one male and one female character.

Rhyme or Reason’s story shares some of the positive qualities of Hierofania, despite its vastly different tone: it tells you a lot about the characters through meaningful bits of information, rather than lengthy backstories and keeps you engaged with interesting story developments and fun dialogue. Thanks to all this, it manages to tell a rather satisfying and complete story in a very short time. Admittedly, the unusual artstyle does not work as well with this kind of mundane themes as it does with fantasy, but still feels properly expressive and makes the characters look unique. Overall, the game is not as engrossing as Hierofania and feels a little bit rushed, with maybe a few too many questions left unanswered and the endings very much open-ended. Still, it’s a fun short story that I don’t regret spending my time with and if you like simple romance VNs, I recommend checking it out.

Sadly, Ludeshka's VN development endeavours slowed down significantly after the release of Hierofania 2 and it's going to be a while before we see another game from her (and especially before Hierofania 3 comes out, as it was explicitly put on hiatus). While there's still hope for the Hierofania trilogy to be concluded one day, all the games I've tackled in this post are self-contained and satisfying stories, worth checking out even if the “true” conclusion to some of the subplots would never arrive. They’re also completely free, which in my book is always a major positive. So, if what I wrote about these VNs piqued your interest even a little bit, be sure to give them a chance – you won’t be disappointed.

Also, as the last note, at some point mobile versions of both Hierofania games were available on Google Play, published by Visual Wordplay. However, just like many ports by that company, they seemed to suffer from serious technical issues. If you want to play Ludeshka’s games, I suggest downloading them for PC from her Itch.io page.