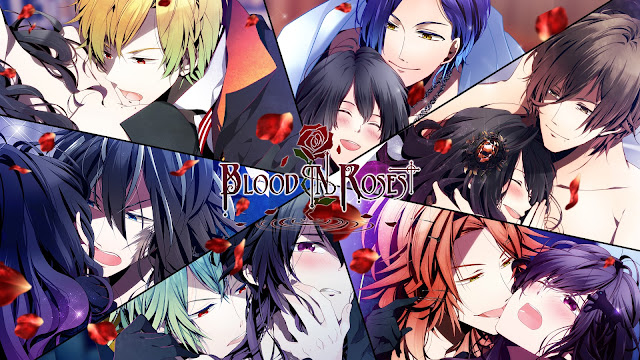 I’ll be completely honest: I didn’t have a good opinion of NTT Solmare even before approaching the game this review is about. After exploring their sole non-otome visual novel, Moe! Ninja Girls, I was absolutely stunned with the predatory monetisation and poor quality of that title. I was still curious about their otome projects though and decided to check out one featuring the theme I personally enjoy a lot: vampires. Thus, I ended up playing Blood in Roses+, one of the over 20(!) games in the Shall We Date? series and what I found there was an extension of my Moe! Ninja Girl experience, along with some interesting surprises (which doesn’t mean any of them were particularly pleasant).

First, however, a bit of context is required. NTT Solmare is a Japanese company producing e-books and mobile games primarily for the Western market. Shall We Date? Otome games are their flagship product and can be split into two categories: paid apps, which are mostly Android/iOS, English-localized ports of Idea Factory otome VNs and free apps which are produced by NTT Solmare themselves. Since 2011, they’ve released literally dozens of cheaply-made, but aggressively monetized games, particularly in the free-to-play segment. This is also the category where Blood in Roses+ fits in, being a fully free-to-play mobile VN, in which you can theoretically experience an impressive and constantly-expanding pool of content without paying anything. There’s a catch though… Or a dozen, which are all worth discussing in detail due to the unbelievable abuse of the VN format they represent.