I will not give a general description of the story as I would assume that anyone picking this up has watched the anime.

The first part of the VN just retells events from the anime and also often just uses art directly from the anime. This part tells the story from episode 1 to the end of episode 10. As it covers 10 episodes of the anime this part is quite large, especially since lots of things shown visually are instead just told through text and there is a bit of internal monologue that that doesn't really do anything other than make the reading experience longer. I also noticed that it cut out events where Tsukasa the main character is absent, because of this some important Isla moments are lost which I think hurt the story. As an adaption I think it does a rather poor job, not managing to be anywhere near as emotional as the anime in most scenes and for some of the very emotional scenes it just takes a clip from the anime. Because of this I would recommend anyone who wants to read this VN to skip this first part, if you want to refresh your memories of the story before the later part I think you should just watch the 10 episodes of the anime then skip through until you hit the point where you can choose daily events.

Once the anime adaption part is over you get to an event system where you choose between different events where an event will unlock other events. There are 65 events in the VN as well as 4 dlc events, one being from buying an early copy of the game while I think the others comes as a bonus if you buy it through amazon. As for my thoughts on the events themselves they are a bit mixed. Many of the events felt a bit boring, which mainly had to do with Tsukasa not really being that interesting of a main character, kind of just being a kind hearted optimistic character with no other traits that really matters, as for Isla I think the lack of animation kind of hurts her as the anime uses animation a lot to show her personality which means that she comes of as less interesting and fun than in the anime. The other cast is pretty good and events with them I generally found to be a better. So I am mixed on these events as I found a decent amount of them to be rather boring while others worked quite well. Among these events there are also a few story ones which I think does a good job at exploring a bit more about Isla and more about the Giftia, though there are only a few events that does this and they are rather short.

As for endings there are 4 endings where you choose not to confess to Isla (the confession scene is put before the event part of the VN so this choice happens before the daily events and the daily events are not part of these endings). These 4 endings focus on 4 different coworkers and are not romance focused but rather just gives some scenes with them and expand on their personality and past. While I think these does a decent job at this they are all rather short and as such feel kind of lacking. There are also 3 endings where you choose to get together with Isla. One of them is the normal ending which just follows the events of the anime from episode 12 until the end of episode 13. The others are a good ending and a bad ending. The good and bad ending are also rather short. While I think this would be okay though not preferable with the bad ending I think it is quite a shame with regards to the good ending. I expected the good ending to have a decent length and try for a bit more of a major story, but it felt rather rushed and I think it should have had lots of larger events especially since some of the events build up towards it.

So for my final thoughts. I think this VN is only for people who really like Plastic Memories and feel like they want to know more about the different characters and have an alternate (though kind of lackluster) ending. The first part of the VN should just be skipped and the anime should be used to catch up on the story if you need a refresh of the events. The events range from a bit boring a quite good though they never really impressed me. The different endings were quite decent though a major problem with them is that they are quite short which makes them lack the impact I think they should have. So while I found the VN to have some good parts I think they are a bit too short and the parts that are just kind of decent enough makes it not really enyoable enough for me to really recommend it to most people.

Front of the physical edition 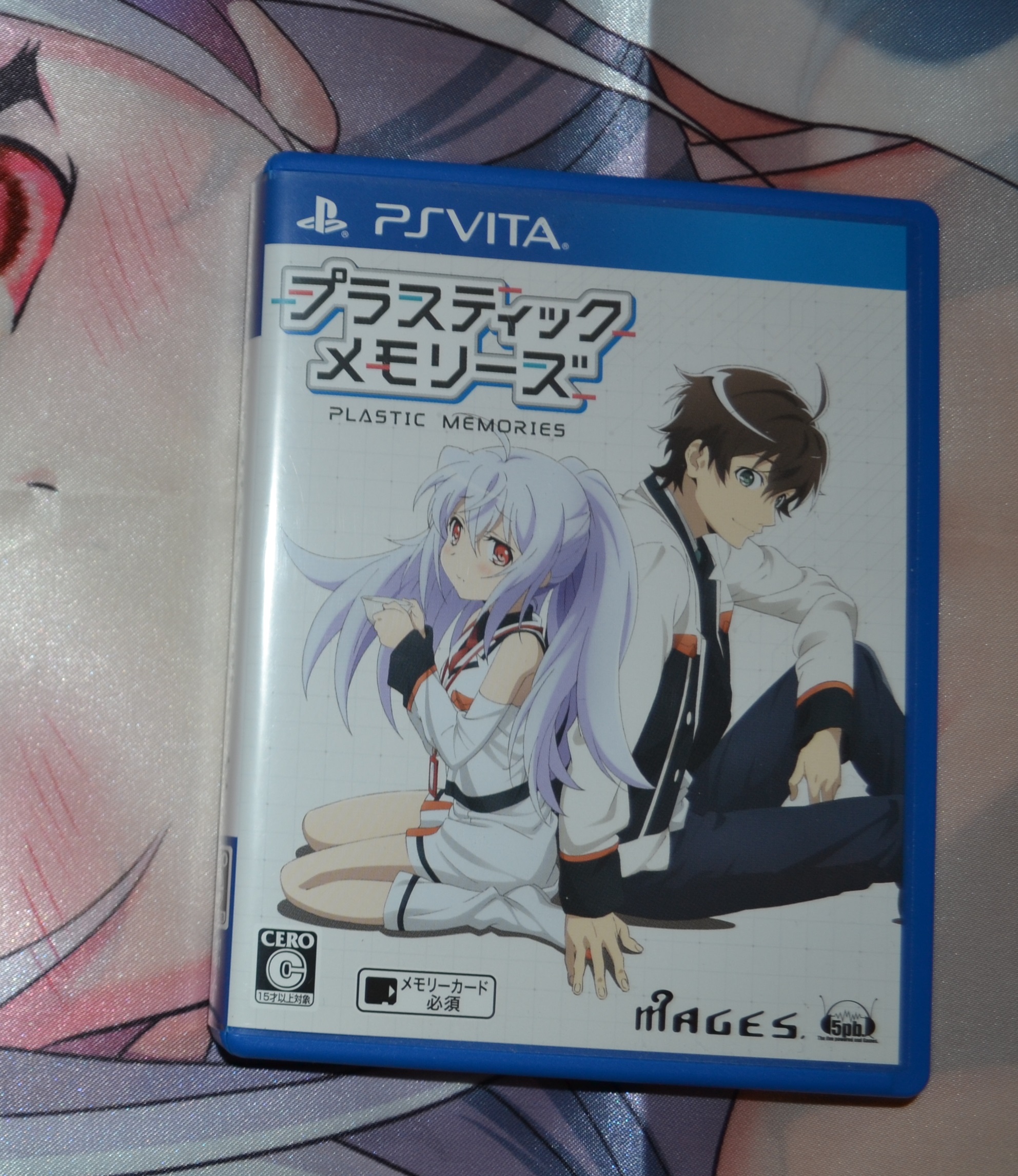 Back of the physical edition 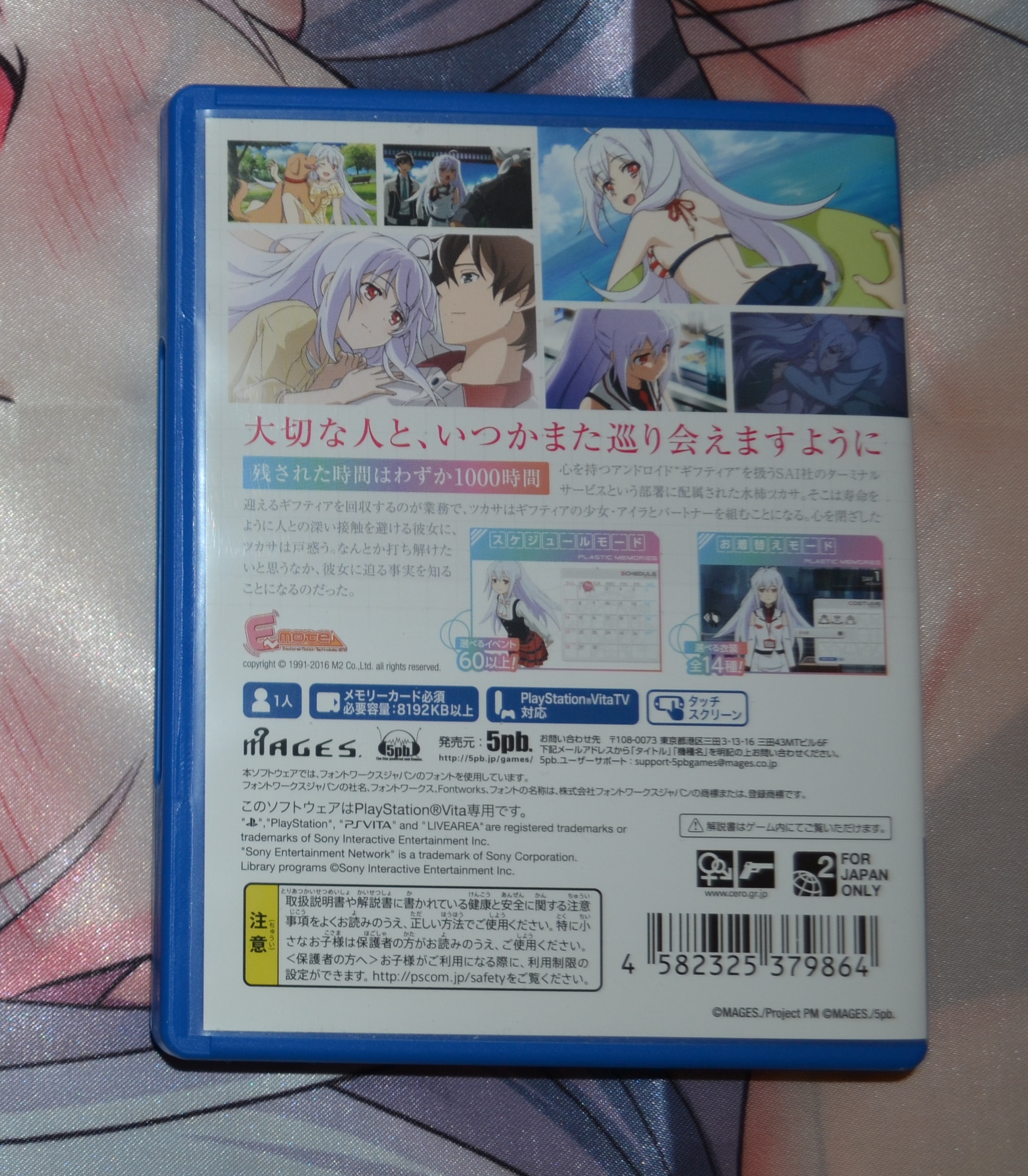 The inside of the physical edition (have already used the code, it unlocks an event in the VN) 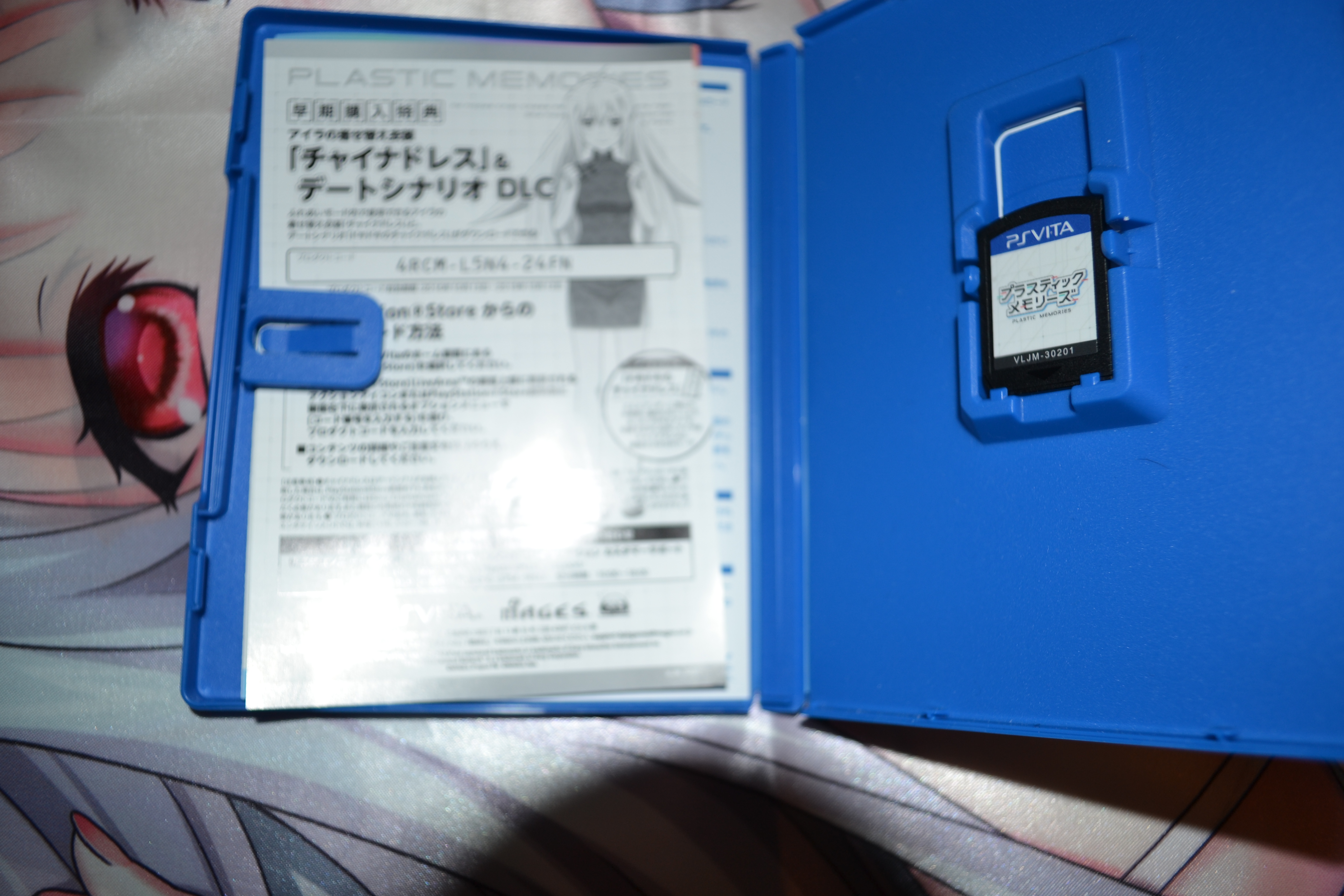