Henshin !!! Pantsu ni Natte Kunkun Peropero is a nukige about a perverted guy who gets the ability to transform into different things which he uses to creep on girls and rape them (the reason why he can do this is that from the thing he is transformed to he can create different body parts). So ye it is a pretty weird nukige. The VN starts with the main character moving to another school where he ends up in the same class as his little sister (who moved out after he stated his wish to become womans panties). After his day at school he finds an odd creature which looks like a stuffed toy. This creature who gets called Nanako claims to be from the future and gives him a candy with nanomachines that enables him to transform into different things and a phone looking thing to select and record his transformation. The effect of this lasts for 30 days and it can only be used 2 times a day (only 1 time a day in the weekends). The scenes of the VN is built around a map structure where you pick different scenarios from the map, first starting with a limited amount of events, but as things progresses more areas are unlocked either due to events that happen outside of the sex scenes or due to one event unlocking another event with the character. As for characters there are 7 characters that are the main interest of the main character who have their own ending, 2 of them are sisters and shares events and endings so there are 6 endings. While these 7 characters are the main targets of the main character there are also lots of other events which has the main character target random girls with lots of these being full on sex scenes.

The first part of the VN generally focuses on setting up the situation and mainly relies on comedy rather than H-scenes, so it does take a bit of time before the first H-scenes start. As for the early H-scenes I found a lot of them to be quite weak, they are both very long and also quite tame with a lot of the time being filled by the main characters internal monologue with little time spent on the different girl's reactions comperably. Though as I progressed through some scenes they started becoming much better in terms length and the situations also ramped which made them more comedic and more stimulating. So while I initially found myself dissapointed it improved substantially over time for me and i ended up liking it quite a lot. I did still find the internal monologues to be a bit long though, but that is kind of expected given the nature of the H-scenes as there really isn't a back and forth between the main character and the girl in most scenes (though the reason I found the internal monologue to be too heavy probably also has to do with me having a lower reading speed than native japanese people who probably read through these lines in a few seconds). The map system the VN uses works very well with it giving a good amount of freedom to the reader, this is quite limited in the start as only a few scenes are available at that point, but it works really well once more events are unlocked. As for the endings they are either romantic or comedic with the main character and one of the girls (2 with the sister route) getting together. While romance aspects seem rather odd they at least fit quite well with the specific girls which makes it less jarring. Also one of the routes is a bit special and has more story elements, while it is kind of a pain to unlock I did find it to be quite nice, with it tying very much into the character Nanako and why she is in the past. As for what I think is the strongest point of this VN I would have to say the uniqueness of the H-scenes, I mean it is just so different from anything else I have seen in nukige. Situations like turning into a bicycle and spawning a dick to rape the person riding it or turing into a snorkle to get a girl to give you a blowjob is just so freaking weird and exactly what I was looking for as I wanted a VN that would just make me go wtf japan?

A bit about the different girls

Amasaka Miko, the main characters little sister. She is a quite typical tsundere with a brother complex. I found her to be a fairly decent character though nothing really special. While there were some good moments with her she just ended up being too much of a standard tsundere without much else apart from a few situations.

Andou Roza is a kohai who is a super hacker and really good at video games and is often in her own world and often comes of as emotionless. While the first few scenes did a decent job of getting to know the character and had some comedic moments the emotionless part kind of hindred a lot of the enjoyment of the scenes. However as the route progressed she opened more up and there were a decent amount of good moments with her and her H-scenes got a lot better.

Merakawa Yuzu is an idol that the main character is a fan of and the girl who is number 1 on his list of girls he wants to be the panties of. The first scenes focus primarely on the idea of assulting an idol in secret while she is infront of a large crowd, while the later part shows her personality a lot more with her trying to catch whoever is doing these perverted things to her. The later part of her route really liked as I found the comedy to be really good and also liked the character.

Minakoshi Konami is the main characters homeroom teacher as well as a PE teacher. I found her to be a likeable character and I feel like she had generally consistantly good H-scenes. I don't really feel like there is that much to say about her other than her just in general being a likeable character and that one of her later scenes in particular was really good in my opinion.

Nakada sisters are senpais of the main character and are the leaders of the student council. One of them is a kind hearted airhead while the other generally portray herself as serious (other then all the time she fantasies about doing lewd things with her sister). Their interactions were in my opinion hillarious and they were by far my favorite characters. My favorite scene in the VN includes them and a double sided dildo and their other scenes were also some of my favorites. One thing I really liked about them was that there was much more of a back and forth between them and the main character after a certain point as well as just them interacting with eachother. I felt like this aspect really spiced up their scenes comedically and sexually which I would assume is why I found their scenes to generally be some of the best.

Tsukishiro Kagura is the roommate of the main character's sister. She is quite timid and endearing and I think her route is the one that had the best romance, though the romance still felt a bit odd given how the VN is in general. The main thing with this route is that even though the main character often uses his power to assult her he also helps her with a certain problem she has been struggeling with for a while. As for the H-scenes I would say she has some of the weaker ones in terms of being sexually exciting, but I also think she has the best of the a bit more wholesome scenes in the VN.

My general thoughts on the VN

My general thoughts on Henshin !!! Pantsu ni Natte Kunkun Peropero is that it is a good weird nukige that I would recommend anyone who knows japanese and just want something that makes them go wtf Japan? While I think the H-scenes often suffer a bit due to a lack of interaction between the main character and the girl this is something seems pretty inevitable given the general nature of the VN and I think it makes up for this fault by the originality of the scenes as it has H-scenes with situations you won't find in other VNs. The girls were in my opinion all quite good given that it is a nukige though the Nakada sisters were the only ones that really stood out as great characters for me. She map system also worked quite well as it gave a decent amount of choice which is important for a nukige of this nature.

The front of the physical box 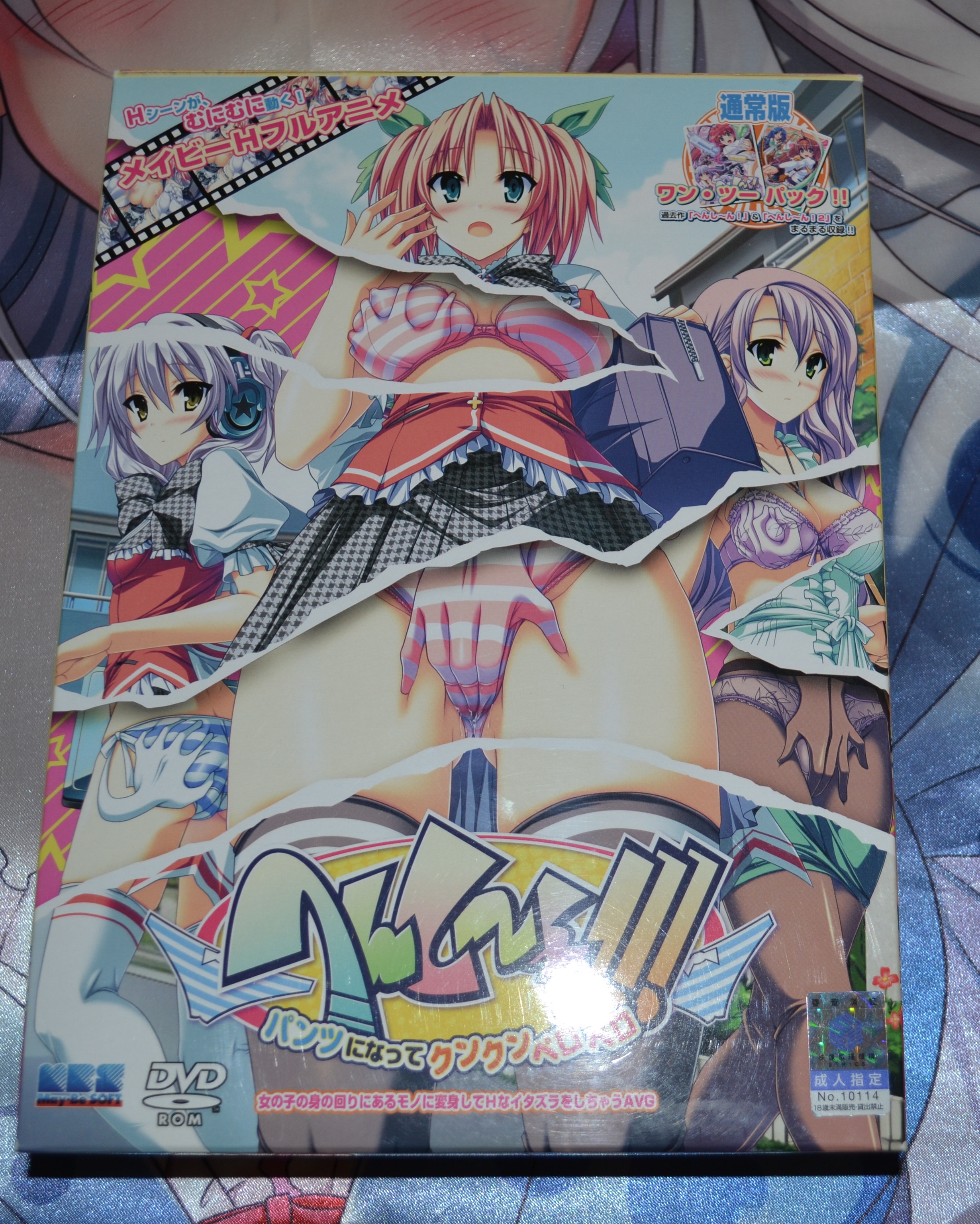 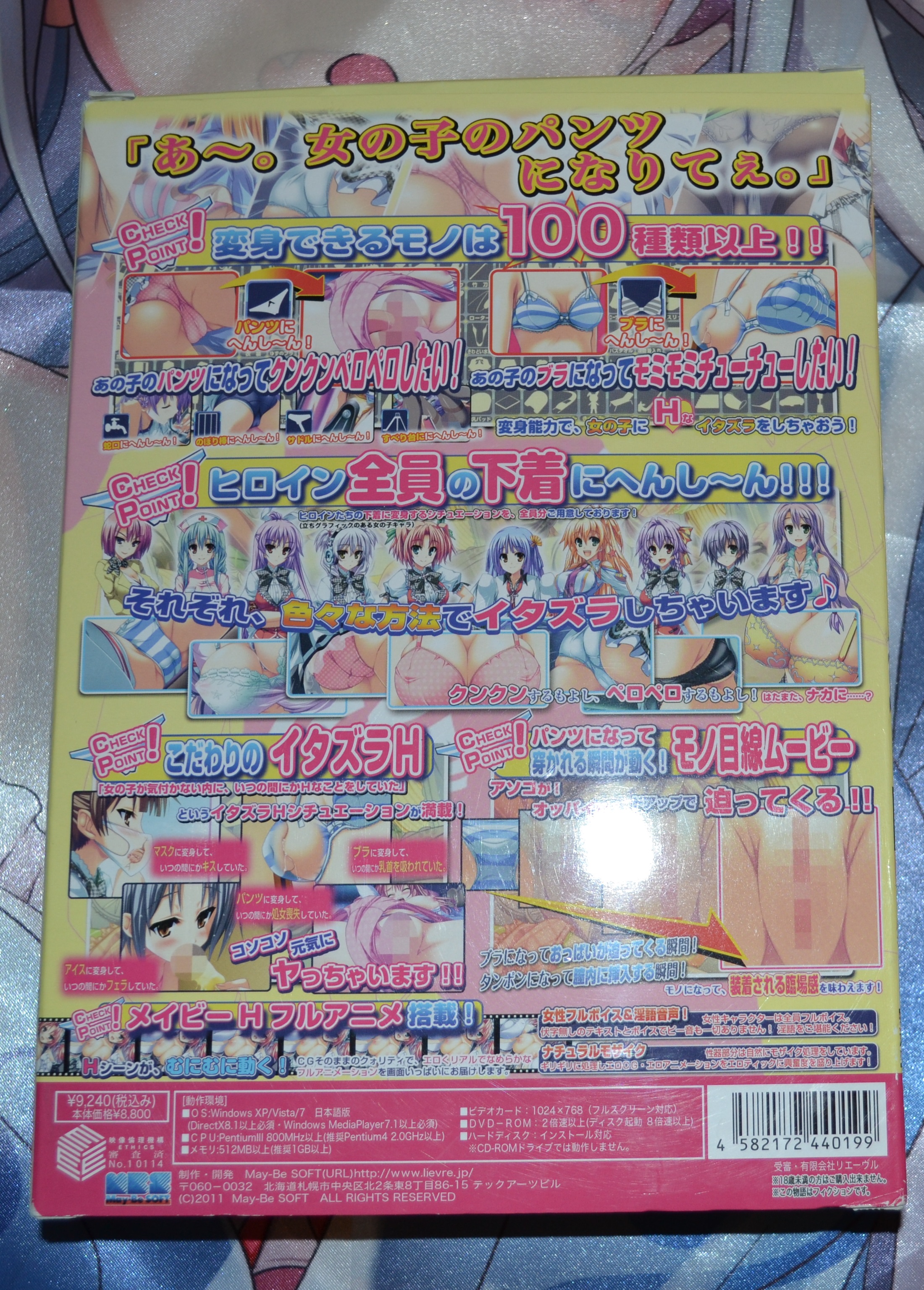 Here is a better view of how the CDs are stored. 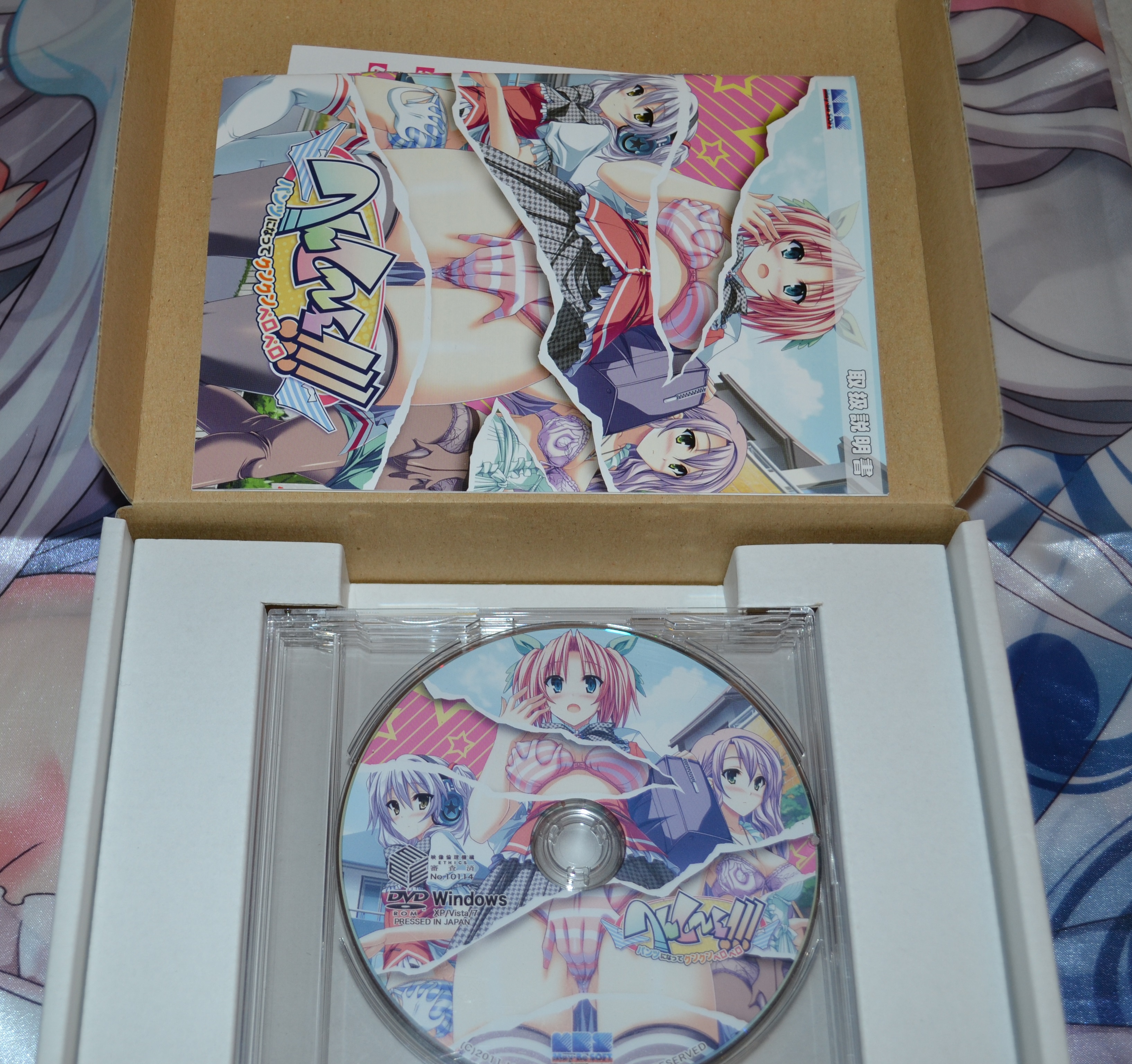 The VN itself, it also include the disc for Henshin! and Henshin!2 which are older titles by the same company which has quite low resolution and serves as some bonus things for the release. I don't have any intention to read through the first 2 henshin VNs though I do think it is a nice bonus and I did skip through them to unlock the CGs then upscaled the CGs so I can view them in higher resolution) 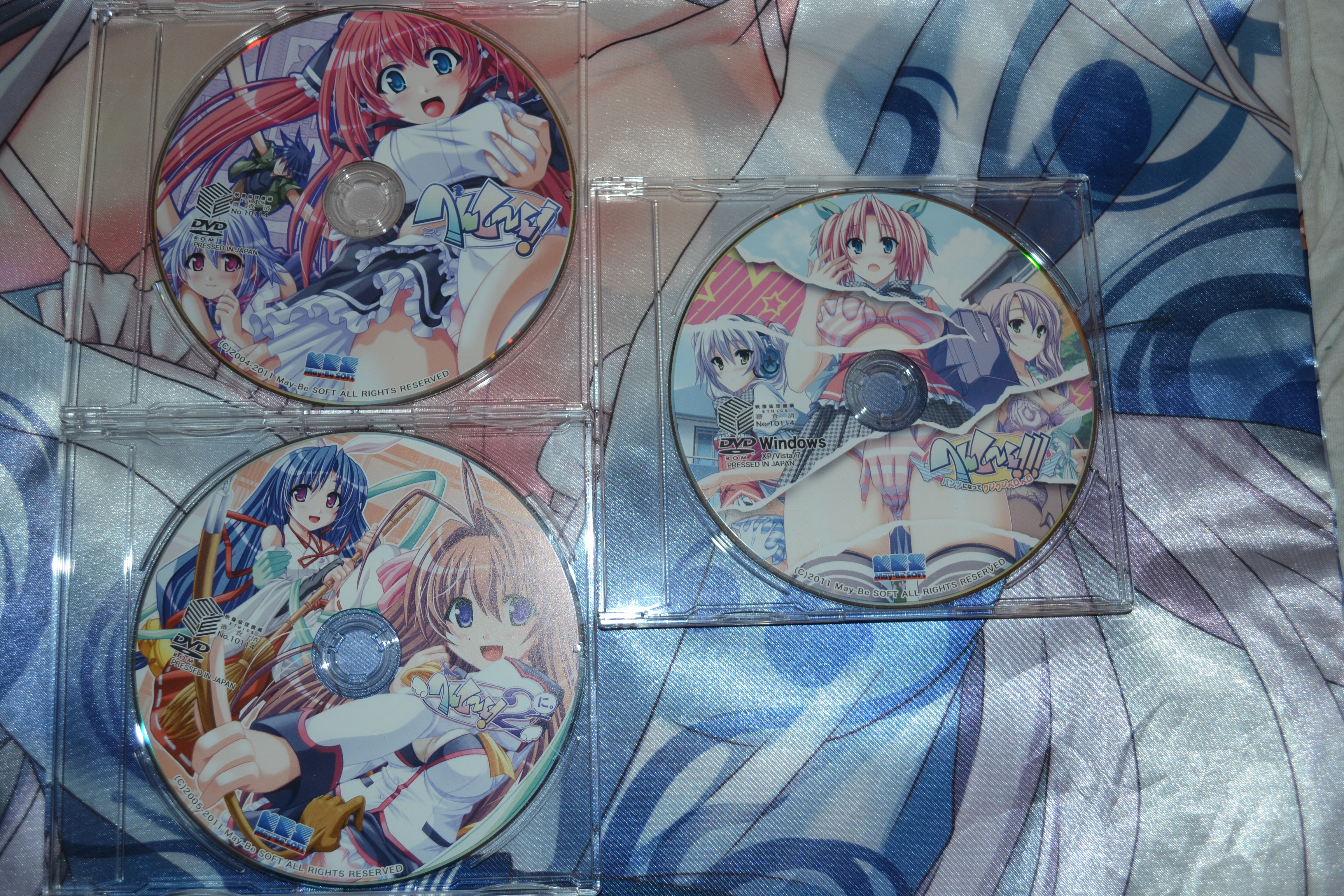