Let's talk a bit about Postmodernism. I don't have the time nor expertise to properly explain the term and its origins, so if you don't know the term, I'll just recommend reading the TVTropes article on it. The gist is that Postmodernism in fiction “question on the nature of narrative and plot and characterization.” This can take different forms, from deconstruction to meta-commentary, self-awareness, fourth-wall breaking, not resolving narratives, putting existing fictional elements into a new context, subverting tropes, mixing media, and many more. This sounds rather intellectual, but there are lots of examples in popular culture with varying degrees of artsy-ness, like remixing in music, more or less every Quentin Tarrantino movie, most superhero movies or comics these days (as they are either heavily self-aware or deconstructing the inherent archetypes), and even two of the most highly rated VNs on vndb are pretty postmodern: The Muv Luv trilogy deconstructs the Mecha genre by looking at how throwing a stereotypical harem protagonist into a post-apocalyptic world with giant robots would impact his psyche (you could argue that Steins;Gate does something quite similar, only using a different setting end set of archetypes), while Umineko takes a pretty basic whodunnit setup and then just keeps pouring on unending layers of meta, deconstructing the very genre it pretends to be at first in the process.

For a postmodern element to work for the recipient, they have to understand the context of it to some degree, not necessarily intellectually, but in the form of certain expectations not being met or a reference putting something known into a new context and a feeling that the subversion or reference is happening with a purpose. For example, when the aliens attack for the first time in Muv Luv Alternative, you expect a fight scene, with some sort heroic moment towards the climax. Without spoiling too much, that's not what happens, and the reason why is to show that there are actual stakes that are too high for some random guy who thinks he's the hero. If the recipient can't see any indication of an apparent purpose to a subversion of expectations, it just feels random to them. 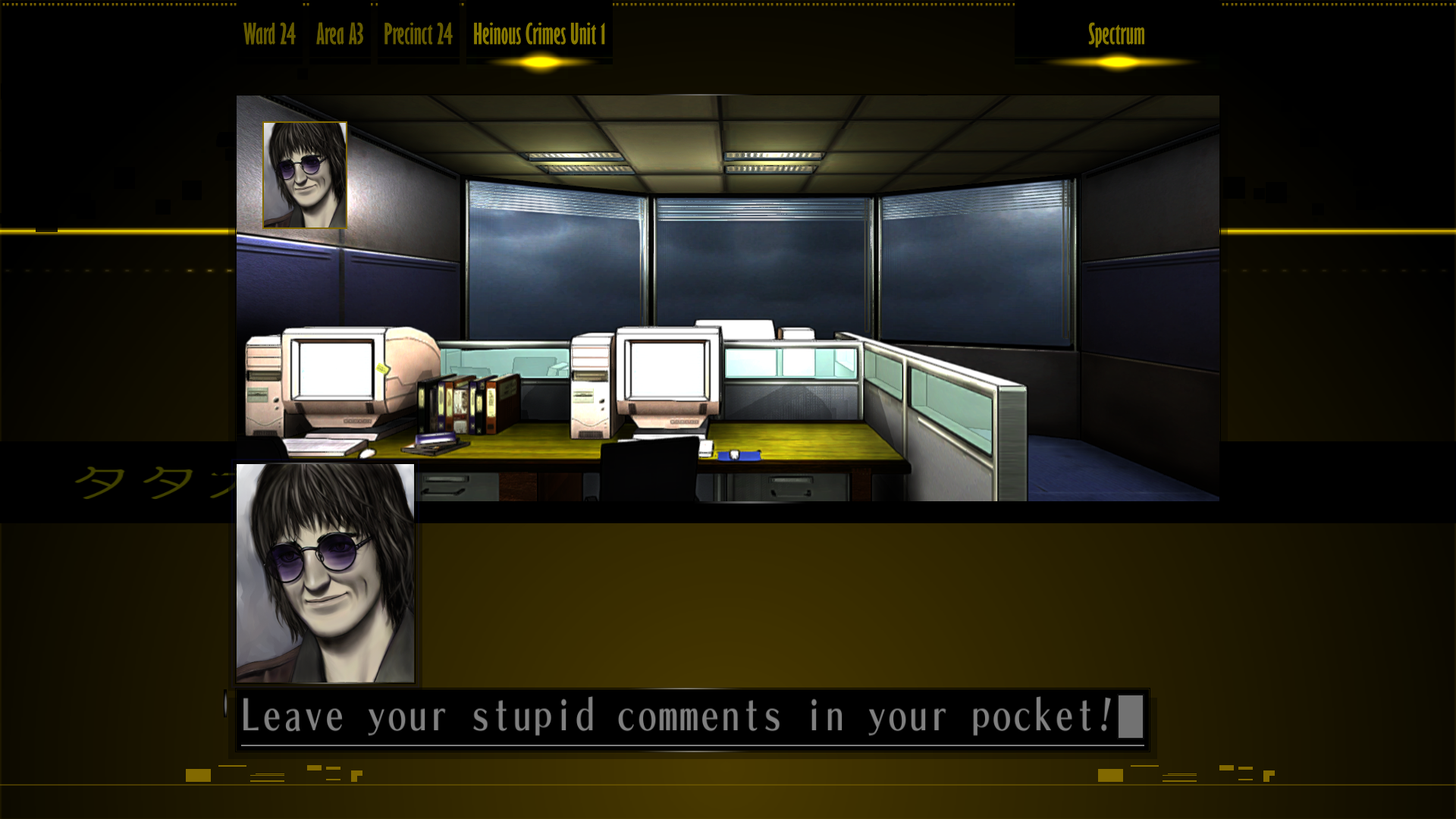 Anyway, how is your sex life? I really didn't expect a The Room reference to appear in some Japanese art game.

Which brings us to The Silver Case, the first game the notorious experimental game developer Suda Goichi (better known as Suda 51) wrote and directed for his own company Grasshopper Manufacture. Originally released in 1999 for the original Playstation, it was only localized and remastered for the West as a PC release as recently as 2016. It's an interactive adventure game consisting of two story threads that sometimes intertwine to some degree. In one (called “Transmitter”) the protagonist becomes part of a special police unit after his original unit becomes exterminated by a serial killer and walks around crime scenes and in the other (“Placebo”) you're a journalist investigating the same cases. As for visuals, you're constantly watching a background on which windows pop up that contain the 3D environments, painted CGs and character portraits, written and spoken text, and sometimes even full motion video. According to Suda 51 this system was implemented due to the newly founded studio not having enough manpower to animate the complete screens in 3D, but it looks pretty stylish and unique. There is gameplay that consists of you moving through grids in the aforementioned environments and occasionally interacting with someone or something and solving a few puzzles, but more on that later. There is an overarching plot about a serial killer, I guess, but the game is really vague about it and there already is a very good Eurogamer.net article on its themes, which makes the game sound way more accessible than it is though.

It's a game that takes a postmodern approach to everything, not caring if it makes the experience less enjoyable in the process, be it gameplay, visuals, characterization or storytelling. The Silver Case constantly forces you to figure out of you're supposed to take what's on the screen for its face value or on some kind of meta or thematic layer, willingly breaking the rules of what makes games and stories good by traditional standards, making you connect the dots yourself and even question certain game and storytelling mechanics itself. Going by some of the reviews, not everyone who played it was aware they were supposed to do that*, and it's easy to see why: The game never explicitly tells you to read some deeper meaning into anything, not even implicitly. It just assumes you read it as art, something video games nearly never do.

Take the protagonist of the Transmitter sections as an example. He is nameable and completely silent, so he basically is your run-of-the-mill self-insert MC. After the incident exterminating his unit, he just gets taken along by two detectives of a different unit investigating said incident without any explanation and is just assumed to be part of the team from then on. His colleagues treat him like he knows what is going on or don't care about leaving him out of the loop, but either way the player never gets any necessary exposition. The MC is only ever given footwork tasks instead of actual detective work, but still gets the nickname “Big Dick” and of course it turns out he is the Chosen One (spoilers, I guess, not that it matters in this case). Now you could either say that this is bad writing, or see it as a deconstruction of the silent protagonist trope, showcasing how nonsensical it would be for a troupe of badass cops to take someone like this along and turning a character like this into the hero of your story. I'm not advocating for reading deep meaning into every mundane thing or excusing every bad decision as “terrible on purpose”, but in this case I have more evidence. For example in one of the chapters about cyber crime your unit decides that you should infiltrate the crime ring. The rest of the chapter basically consists of you waking up in your apartment every morning, reading a new mail about how it's just going to take a little while longer until you become an official member, and then going to work, where you and your colleagues just sit around and do nothing. When you finally become a member of the internet group, you go to their quarters, where someone tells you you're late to the party and the leaders are already gone, and then there is a citywide power blackout and the chapter ends. I just can't imagine the writers just couldn't think of a better way to include the MC into the plot, so I assume they did this on purpose. 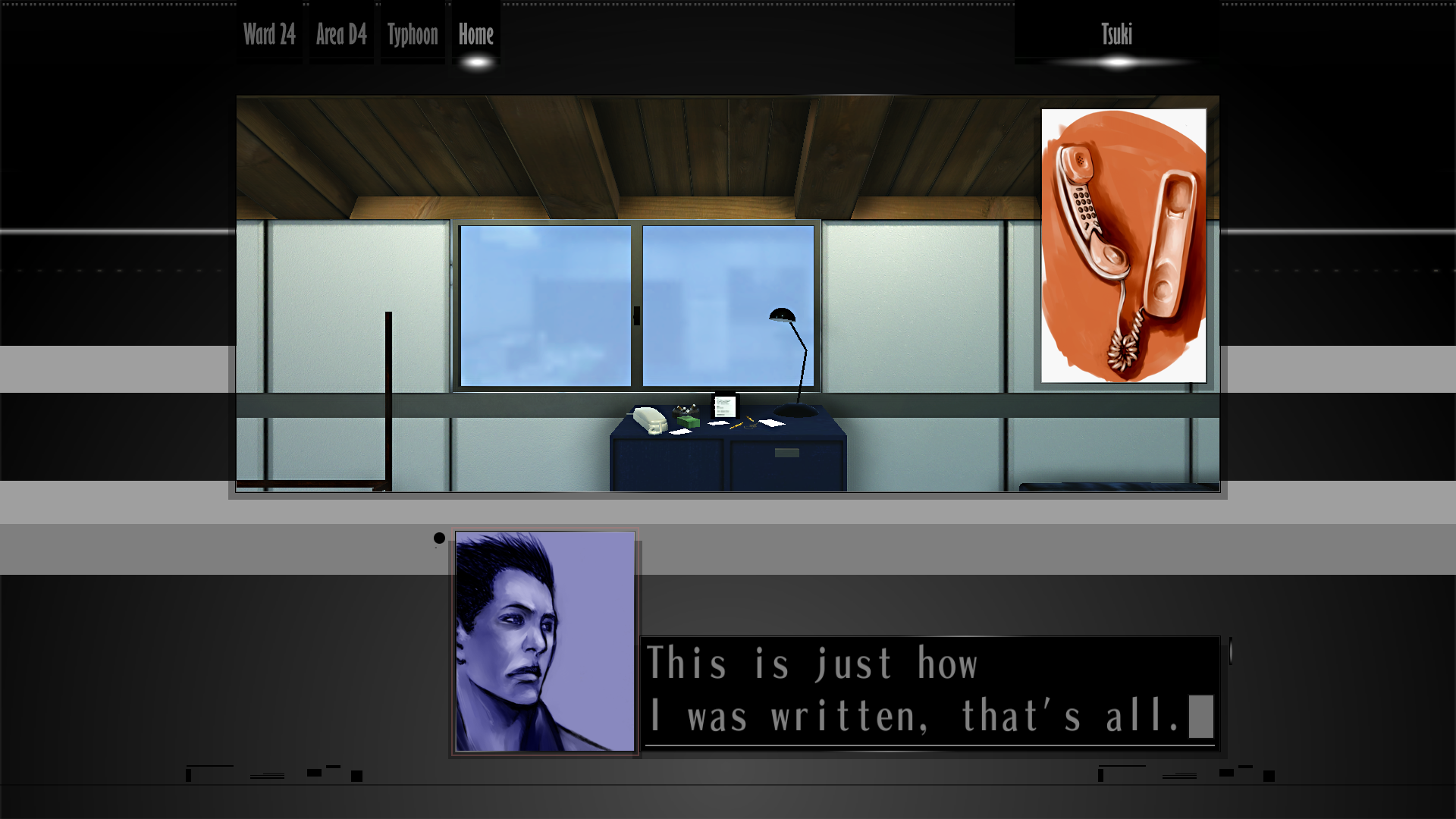 Of course there is fourth-wall breaking in a throwaway line. Even though it may seem different going by my screenshots, The Silver Case is not a comedy. At least I think it isn't.

The gameplay is basically the same. You often get interrupted while moving around by not really necessary dialogues (although these often imply that the other characters are actually doing something), you never actually see anything in the 3D environments which consist of samey looking rooms, and places you can interact with are even marked by symbols and if there is something of note, you just get a dialogue, a CG or a short FMV sequence. There are a few riddles, but they have nothing to do with the plot and are way to easy (in the remastered version the game there even is a button giving you the solution). Often you just have to look through several identical rooms until you find the place that advances the plot. Again, on its own, the gameplay sections are pretty tedious, especially as the controls are just incredibly counterintuitive. It's repetitive, wastes a lot of time, and does nothing to advance the plot. If you look at the MC's role in the story it becomes clear that this actually serves a narrative function in purposefully disconnecting the MC and thus the player from the actual action which you can also read as meta-commentary on how the gameplay in interactive adventure games often has little to do with their plots. In the Placebo chapters you even only walk between your sleeping couch and your working space, where can either read E-Mails (important ones even get opened automatically, so the game even robs you of the interactivity of clicking them, and the MC answers them without any input from you as well and occasionally writes Memos to himself), answer your phone whenever it happens to ring, or talk to your pet turtle, which you sometimes actually have to do to advance in the story. If you read the Eurogamer article you can probably figure out what function this serves on your own**.

I mostly talked about game mechanics in this blog entry but you can dissect the plot, storytelling techniques, characters, pop culture references and the scene direction in the same way (I included two examples in the screenshots). For instance there is the fact that the Big Bad and the McGuffin don't get established until the short cliffhanger epilogue. Or that the short titlecard at the end of each episode shows a full moon and the title of a song by either Joy Division or New Order (maybe somehow playing into the whole “Kill the Past” theme Suda 51 has going on, with the band not only changing their name but also their musical style after their lead singer Ian Curtis' suicide). I could go on, but the whole experience is just to long and confusing to talk about everything.

So is it worth reading? Probably, as long as you're not allergic to artsy-ness (at points even pretentiousness) or and okay with a game challenging your intellect as well as your patience. Is it actually good? The answer is the same as the one to the question of why I spent quite some time writing an essay on a game nobody actually played: No f*cking clue. Did I mention that there is a lot of swearing in TSC?

*Which isn't to say that everyone not liking The Silver Case “just didn't get it”, just that some of the negative criticism in these reviews was about aspects that were most probably deliberately "bad" without acknowledging the not that hard-to-spot meta aspect. A lot of the criticism is still valid as The Silver Case definitely has its major flaws.

**The most interactive scene in the entire game funnily enough is also the most pointless one. At one point during the third case in the Transmitter section, the chief of your police unit and one of its members decide to test if you're qualified for the job by making you take a 100 question pop quiz, including questions about everything from Japanese geography to jazz music (and even implying the cop testing you already cracked the case you're currently working on, but he still sends you do more footwork later on). You pass no matter how well you perform and you don't even get to know your score because "there are no points to be gained in policework", as the chief says. At some points I just can't help but admire how much The Silver Case hates its readers.