Protagonists perceived as weak seem to be something a lot of people reading VNs complain about, and as this is an interesting topic imo, I've been spending some time trying to organise my thoughts on it and write them up in a way that's not completely incoherent. In the process I started reflecting on main characters and their role in fiction on a more fundamental level and came up with a very basic way to categorise main characters, by comparing their personalities to how much it advances the plot in their respective stories. I even made a very professional looking diagram to explain my thinking: 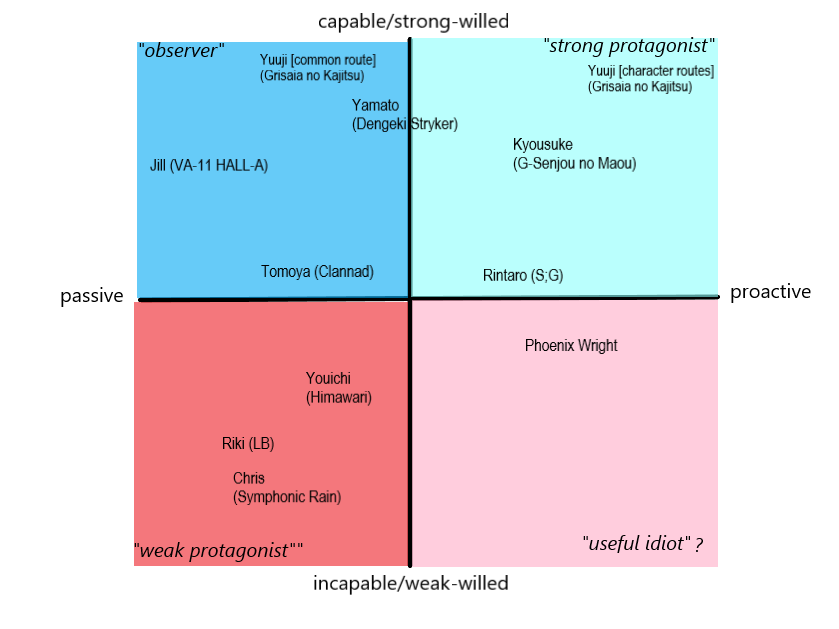 As you can see, the y-axis is supposed to be a measure for the MC's personality, while the x-axis shows how much they actively influence the plot. As each quadrant marks a certain general category of protagonist, I also named those in a way I found fitting (in italic) and added a few examples from VNs I read.

The measure for personality I chose is a mixture of a protagonist's general determination to face problems head on and to which degree they are actually able to solve the ones the plot poses. I know this is kind of a soft category but this whole thing isn't supposed to be a scientific essay and I couldn't come up with anything better so it will have to do. On the top end of this scale you would have someone like Superman, on the bottom end probably Bella Swan.

The question about how proactive a protagonist is at least in this metric boils down to if they mainly react to plot points happening or if they themselves make plot points happen. This category also isn't perfect though. For example almost any character arc involving a protagonist in the "weak" category is about them turning stronger. In my opinion this doesn't make a character more proactive though as this is usually driven by plot necessity.

In this metric you can define four broader types of protagonists. The weak protagonist is someone who usually stumbled into his situation and mainly goes with the flow. The strong protagonist makes his own destiny. The observer is someone who isn't getting too actively involved in the things going on around him, either by their own choice or some external reason. As for the fourth category, I don't know if there actually are protagonists that combine being incapable or weak willed with being proactive. I used Phoenix Wright as an example as you could at least argue that he's only getting by through luck while he always keeps fighting till the end, but that should also move him further up on the personality scale.

You will probably also disagree with other choices I made about where to put certain characters. So as you can see, this is more of an orientation to think about characters and their roles in fictional media than an objective measure. It also doesn't tell us anything about how well a character is written. There are bland action heroes as well as super well developed wimps. I still thought this self-made graphic might be an interesting thing to share. It might also turn out to be a good place for me to reference whenever I might think about writing something about an MC. At least until someone comes along and completely destroys all of my personal theories I based this on.

edit: I thought I'd add and explain a few examples for each category (except the useful idiot as I can't confidently name any) from other media so people who don't know any of the guys in the chart or find my explanations too abstract or incomprehensible can get a grasp on what I mean. But first to give an example of what I mean by proactive vs. passive, because just doing a lot of things is not the same as being proactive: Imagine a story where someone dear to the protagonist gets murdered. If this turns into them killing everyone responsible, the MC is extremely proactive. they could just wait for the judicial system to prosecute the bad guys and testify as a witness, but his thirst for revenge drives everything happening from then on. A passive protagonist in such a scenario might be someone who struggles with the loss and is overwhelmed by everyone else not caring and instead fighting over the inheritance. But now for the protagonist types:

Weak protagonist: Harry Potter - Although everyone in universe talks about how special he is Harry Potter doesn't have that much of a personality, does he? The Sorting Hat talking about how he would be a good fit for any house is true (except for Slytherin as that's basically the Hat telling you you're a bigot) as he shows reasonable degrees of bravery, intelligence and blandness. He doesn't have the magical skills to beat the most powerful wizards either and more often than not gets bailed out by his mother's love or whatever. His personal struggles are always pretty similar to what any kid his age goes through and rarely impact the plot in any major way. In most books he either ends up as a part of the main either through witnessing certain events by chance or because the bad guy plots to get him killed. And most times he gets a "becoming a stronger person and beating the bad guy" arc without him actually groing as a person that much. Harry Potter is also a good example of why a weak protagonist isn't necessarily a bad thing. When the world around the main character or the plot are the actual star of the story, a too strong protagonist could take away from that. The role the protagonist fills is basically to  go through the world with the same sense of wonder the audience would while providing an "everyday person becoming a hero" arc. Which is probably the reason why people who don't like the Harry Potter franchise in general are usually the ones complaining about its protagonist. Frodo would be another example for this kind of protagonist. As mentioned above I'm going to write another blog post about why I think weak protagonists are very common in certain types of VN and why they often seem more annoying than in other fictional media.

Strong protagonist: James Bond - While his stories always start out with him getting a mission he certainly approaches them in a very unique fashion. I don't know if I have to write a lot more about him. Most iconic action heroes fall into this category.

Observer: This type of protagonist seems to be more common in Japanese than in western media. Stories with this kind of protagonist usually have them coming in contact with the plot through either coincidence or their line of work and often involve them providing some kind of service while the narrative focus is on the ones the MC comes into contact with and these side characters tend to have the biggest arc. To name an example in western media Mad Max (at least from the second movie on) is pretty good at surviving in the post-apocalypse but he doesn't have some higher goal beyond that. In Fury Road he might be the main character, but the plot is driven by Furiosa's goals and he just happens to help out as it aligns with him trying to flee from the same people. He still helps out a lot, but technically it's just not his story. Which is why he just leaves at the end. As for Japanese Media Gingko in Mushi-Shi might be the prime example. The anime has more than 40 episodes and three specials, still we learn next to nothing about him. Every time he walks into someone else's story, helps them realise their respective arcs without ever getting too personally involved, and leaves again. Violet Evergarden also fits the description for the major part of the anime. She is a killing machine and apparently quickly becomes very good at her new job as well, yet, while there are episodes focusing on her, in most of them she just helps someone else come to terms with their emotions through providing them the service of writing a letter. Violet Evergarden also shows that it's possible to develop protagonists in episodes not focusing on them.

edit 2: So I managed to come up with an example for  a"useful idiot" (although I don't really like that name, I couldn't think of a better one): many characters in movies by the Coen brothers fit this category. While the protagonists themselves usually are straight man characters, the plots (especially in Fargo and Burn after Reading) often revolve around how bad decisions by incompetent characters lead to catastrophies.