…And you probably know about it already if you know me, but anyway, my own #brand is Memeshii Translations apparently. Since you’re here, have some information on the experience of working with the paltry tools available:

*The linecount had to be the exact same or the insertion tool would crash with an unhandled exception.

*Some lines had a linebreak in the original; these were joined together engine wise so they had to be line broken no matter what. Usually this wasn’t a problem, but some lines ended up short in english but still needed a linebreak so they look wonky, and the second line in-game had two lines that wanted to be long and couldn’t be split so it was kind of hell to fit.

*Weeb quotes 「」 had to be used or the engine wouldn’t read it as a spoken line.

*One line was turned from speech to narration for flow reasons (it was like suu haa or some shit) by removing the speechtag annotation in front.

*There was no manual linebreak code I could use (mandated ones were just CRLF linebreak, and could only been used for that specific line). However, the engine does automatically line-break on a character level, and seems to be more or less monospace. So I ended up doing some of the line-breaking in this truly kami manner, checking it manually ingame over like 5 iterations:

*The nametags were in a different script than the scenario but they were just text strings, so I could just edit them

*Since we used the “spoken line” format I had to convert this to the japanese quotation brackets. Kotlin code for you to meme at: 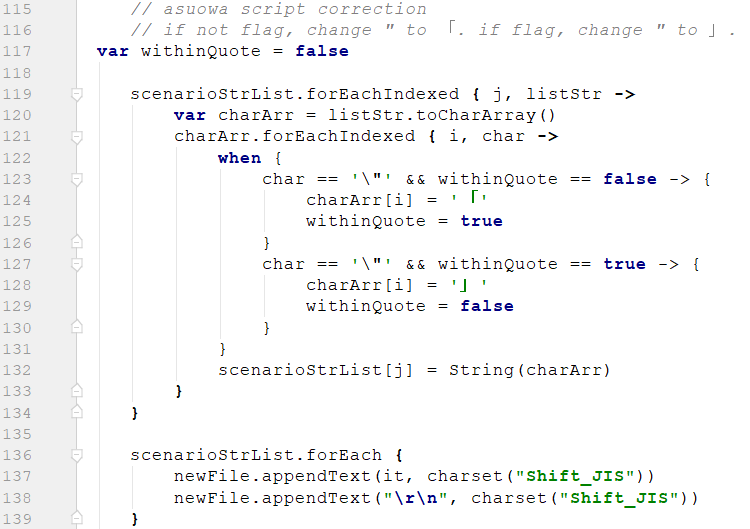 oh, java strings are immutable, fuck… fiiine I’ll your it your goddamn way

This is probably half the reason why any in-line quotes ingame are single quotes; I actually edited a pair of doubles because I couldn’t be arsed to clean up the script after the fixer code worked on it… or something.

Okay since you read this far some stats; I used Mediafire for the release because it gives download counts. It seems to update daily or something. First update was 63 downloads. Second was 89. I had 66 pageviews the blog release post on feb 14 and have 178 so far for feb 15. 89/244 gives us a ~36% download rate per view, not too bad. The About page seems to have gotten like, 8 views. The dedicated asuowa tl page has 7.

So uhh I guess I have to tl more shinimasu now.