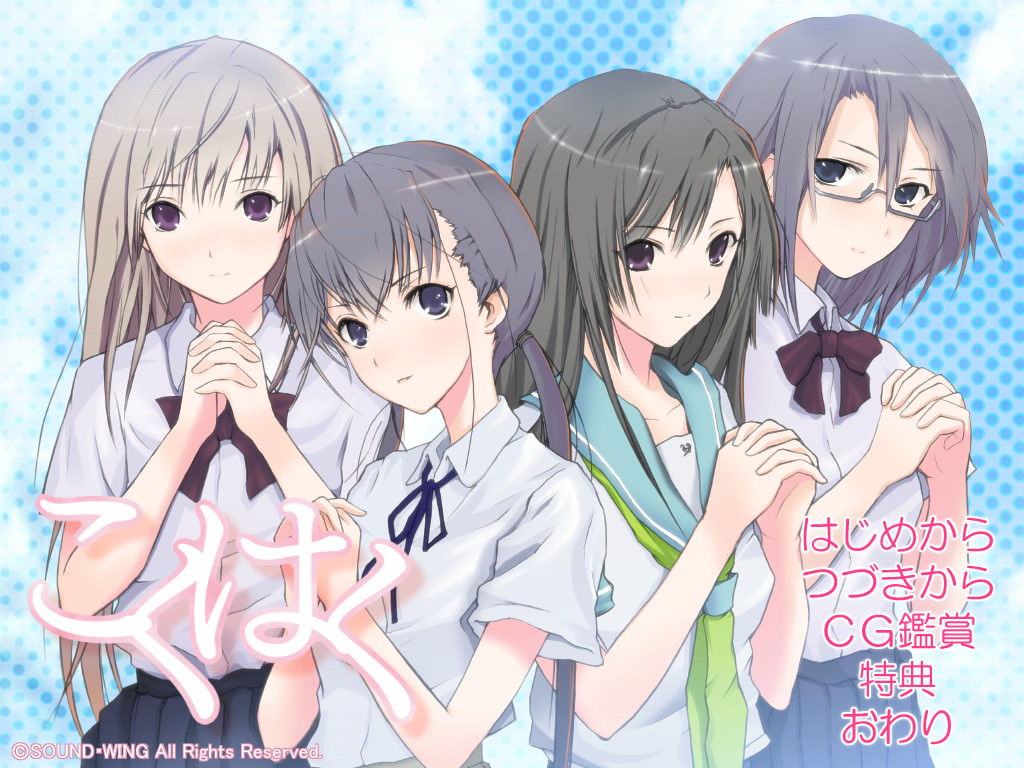 Source: https://j-addicts.de/kokuhaku/ (shameless self-promotion xD )
Kokuhaku or “confession” is a short VN developed by a company called Song Wing which mainly work in sound design, casting actors etc basically all related to sound and music and this is their only work as game developers.

The plot in this VN is nonexistent and plain bland.
The main character is your typical super popular guy and all the girls are in love with him. Why? Who cares, they just are! The game is more like a kinetic VN but lets you choose which girl you want to pick at the end. Throughout the painfully 1-2 hours of reading, each one of the bland and boring heroines will confess their love to the main character without much explanation and out of the blue. These girls are the cliché of the cliché,
Childhood friend? ☑.
Sister? ☑.
Shy girl? ☑.
Tsundere? ☑.
Interesting and well-developed heroine?☒.

Once all the girls confessed their love you will reach the end, there you recall all the confession at once and that’s when you get to pick which of those confessions you take, thus picking a certain girl and confess your love back to her. Then a crappy CG shows up and it’s the end. Luckily there is no harem ending.
And no I didn't omit anything, you read 10 min and a girl confess her love without warning then the other and so on and that's it... 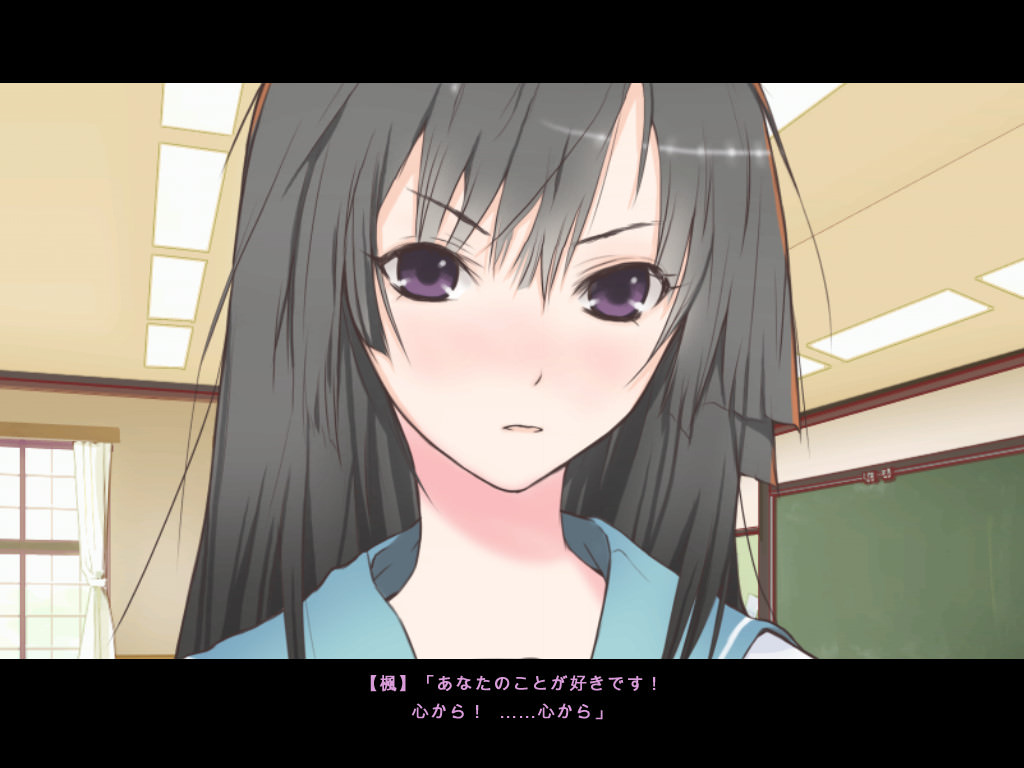 (She confessed her love out of the blue in the middle of a class O.o)

If you want to put it bluntly, there are 4 cockroaches and you are a stinky piece of meat and for no reason at all the cockroaches want that putrid meat no matter what. If you think this analogy is in bad taste, GOOD! Then you understand how playing this VN feels.
It’s also an all ages so you won't see any type of eroge or sexual innuendo at all. 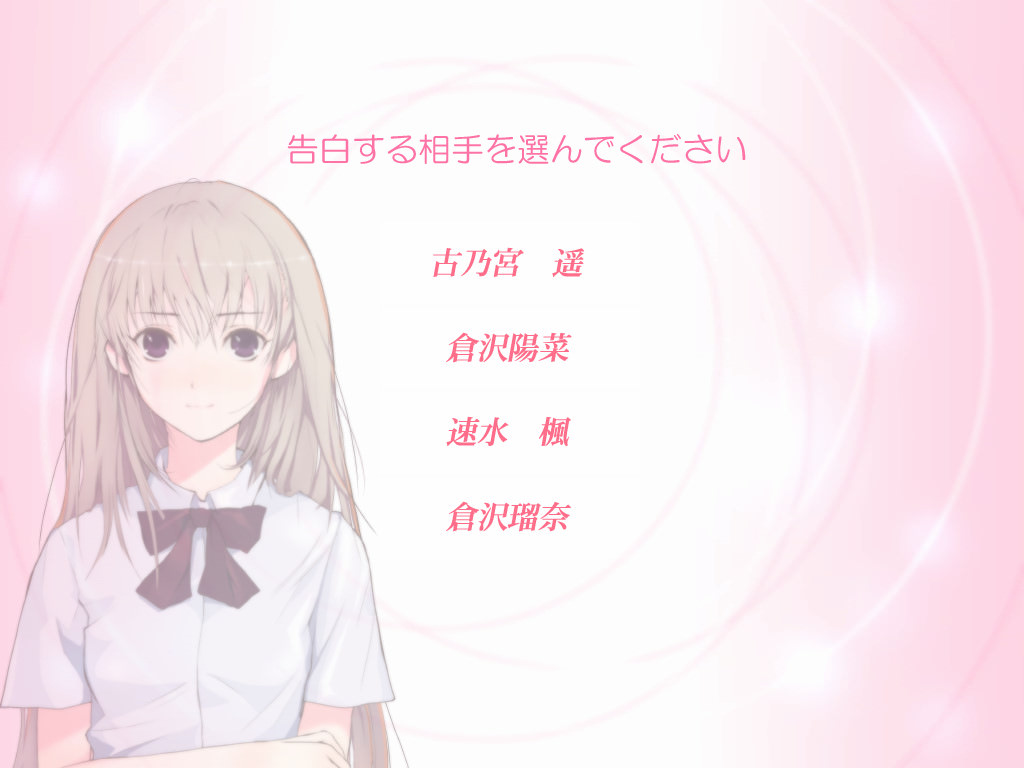 The music while not outstanding it does the job same as the art, it’s a bit on the unique side but nothing that will make it stand out.

So you are probably wondering why the hell is this review for then? Well, as I said earlier the company that made this VN works in the sound industry and here is the catch and what makes this VN partially redeemable. You can choose the voice acting of each heroine from 4 voice actresses when you start the game, which are (IMO) some of the best in the industry itself. 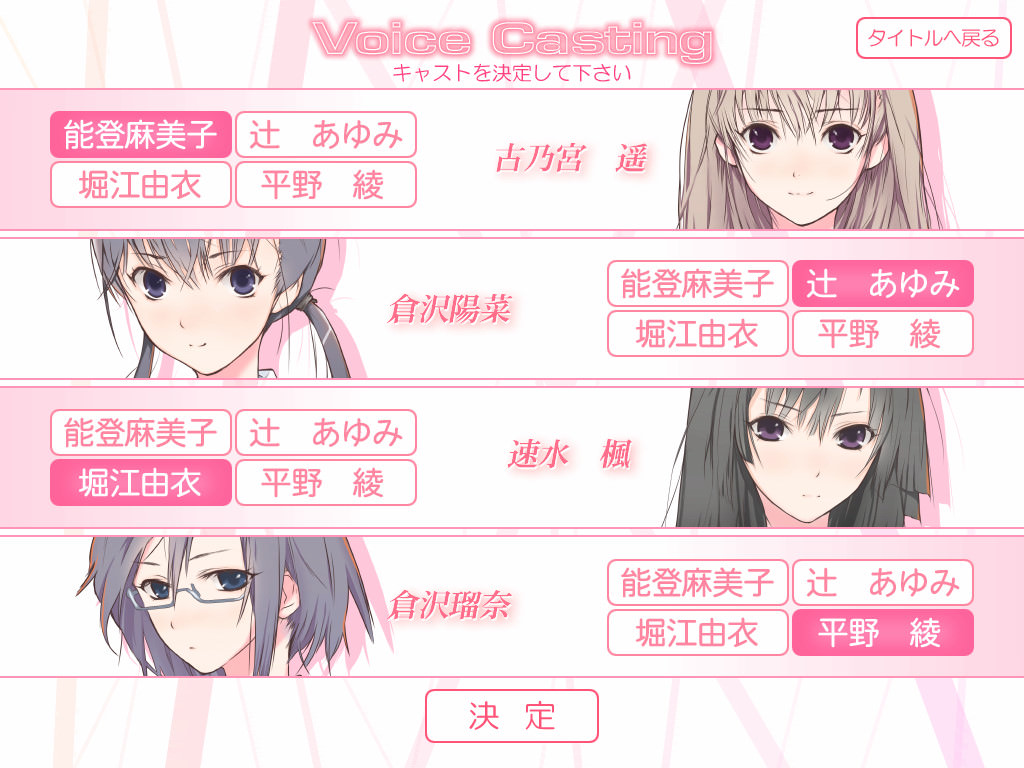 (The screen to select the voice acting Noto Mamiko https://vndb.org/s468 , Tsuji Ayumi https://vndb.org/s271 , Horie Yui https://vndb.org/s46 , Hirano Aya https://vndb.org/s1500 )
But that’s not the most impressive thing, the best part is that you can choose only 1 heroine to do the voice acting of the 4 heroines.
Basically this game was more like a technical concept to show how an actress can interpret several roles at the same time, it’s more like a demonstration project rather than a game but it was sold as a proper game... the question is why they didn't bother to write a decent plot rather than this bland abomination if they were doing it anyway... Also, the writer is not a nobody without recognition in the industry so it’s really mind boggling why they approached this project in this particular way...
Regarding the voice acting itself it’s actually pretty good and the concept itself works amazingly well. Playing the game with the same actress doing all the voices is interesting, to say the least.
So as a concept this is really interesting at least on a technical level. Having 4 heroines and 4 actresses letting you mixing up whatever you want, theoretically there are countless and countless of hours for you to enjoy by playing with all the variations (You do the math)...  but in reality after 1 time you will want to throw this game in the garbage bin and let it rot forever there where it belongs.

Now, saying how much of a technical accomplishment something is where you can only tell by listening it would be unfair so I recorded a demonstration so everyone can judge for themselves.
Here it is, rejoice (I recommend watching it in full-screen):
If you want to read more reviews like this one check out: https://j-addicts.de/
Share
Followers 1