If it is not clear by the title or by the pictures under Imouto Paradise is a nukige about an older brother and his five little sisters. If this doesn't sound like anything you want to read it probably isn't going to be something you enjoy.

Before the review I would like to mention that it has been about one and a half year since I read all of the routes of Imopara so I have probably forgotten some details. To make sure that my general feeling towards Imopara was right I did reread different parts of it though so I don't think anything I will write here would contradict with what I would have written if I had read it more recently.

First a quick summary of Imopara. Imopara is about a perverted older brother and his 5 little sisters Aya, Michika, Rio and the twins Hiyori and Koharu. Summer vacation just started and their parents are on an overseas trip due to work. This leaves the siblings alone and opens up the chances for them to express their feelings for each other. As for how it plays out there is first an introduction and then you get an option to spend time with one of the sisters. Spending time means a sexual scenes will happen and as you continue picking the same sister you end up with actual sex scenes and enter her route. You can also chose to just relax and stay at your room, after doing this for all the choices the little sisters become worried and it leads to the harem route.

Here is a bit about each of the little sisters

Aya is the little sister who takes charge of most things in the house like cooking and laundry and pretty much acts like their mother while their parents are away. Her route is pretty much the only one that actually focuses on the fact that what they are doing is incest and she is the only one to be a bit bothered by it. As for her sex scenes I think the vibe they go with is pretty similar to a wife wanting to make her husband happy.

Michika is pretty quiet doesn't show a lot of emotions and generally spends her time reading books. She is also open about being a sadist who want her brother to be her masochism dog and often recommend him books about masochism. While she is a sadist most of her scenes don't really go that far with it, it is mostly about how she is in control during the sex scenes and how she talks down to him and try to excite him with dirty talk. One thing I also want  to mention is that I found her voice during the sex scenes to be really good and quite a turn on.

Hiyori is the loli sister, she is small cute childish and doesn't really know anything about sex. The first scenes focus on the main character teaching her different things about sex and having her do sexual things in front of him and to him. Most of her sex scenes focuses on embarising suituations and I think she and her twin Koharu are the ones who does the most risky stuff (doing sexual stuff in public or at home when there is a risk of other sisters finding out).

Koharu is a tomboy who excels at everything related to physical activity has endless stamina and a bottomless stomach. She is also an open pervert who kind of has a rivalry with her brother of who can be most of a perv. During the sex scenes she is very direct and uses a lot of dirty talk to turn her brother on. While she does have lots of risky scenes they feel quite different from Hiyori's risky scenes since she really isn't embarrassed and isn't nearly as worried about being found out.

Now for the actual review. I think Imouto Paradise does an excelent job at what it sets out to be. Since they are siblings they generally don't hold back when talking to each other which causes some great comedic moments. Due to their differents personalities there are so many fun scenes and I would say the general comedy is just great. As for the sex scenes I would say that they work really nice, each of the distinct personality work really well within the sex scenes and the main character being a pervert also helps since he can do things like tease them or have funny perverted thoughts while having sex causing the scenes to not become boring (at least in my opinion). One thing that seem to be quite prevelent in all of the routes regarding the sex scenes though is having sex in risky places, while I mentioned that the twins has most of this, the other sisters also have a substantial amount of it. So in general I would say sex in places where others could find out is probably the main fetish of Imopara. Also each route feels distinct due to how different the dynamic is between the brother and the little sister as well as how they each route focus on different sexual things. As for the story don't expect much, mainly the routes has some small internal conflict for the little sister to deal with but it keeps itself light hearted since the aim of it is to be a good upbeat nukige with lots of fun character moments rather than tell a complex story. As for the art I would say it is pretty good though it is a bit stiff in my opinion, also for some reason the eyes look a bit grainy. As for genetalia artwork, well it is pretty bad and range from meh to just horrible. Each route feature one sex scene where it is animated after penetration, the animated part is kind of grainy and it is annoying that it isn't possible to turn of while reading it or in the CG gallery. As for the music I found it to be good and pleasing to listen to and just work well with the mood of the VN.

Here is the front of the hardcopy 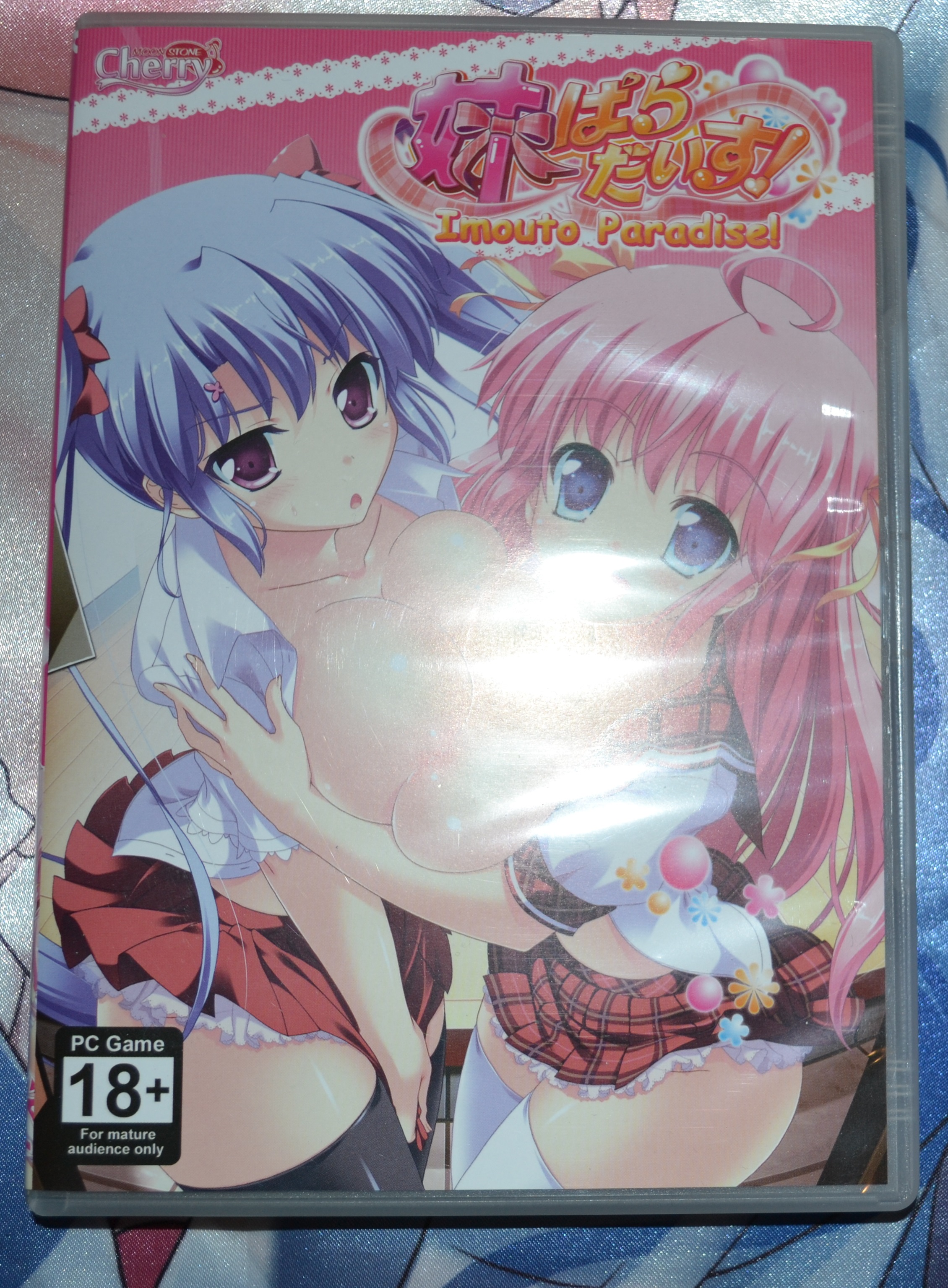 The back of the hardcopy 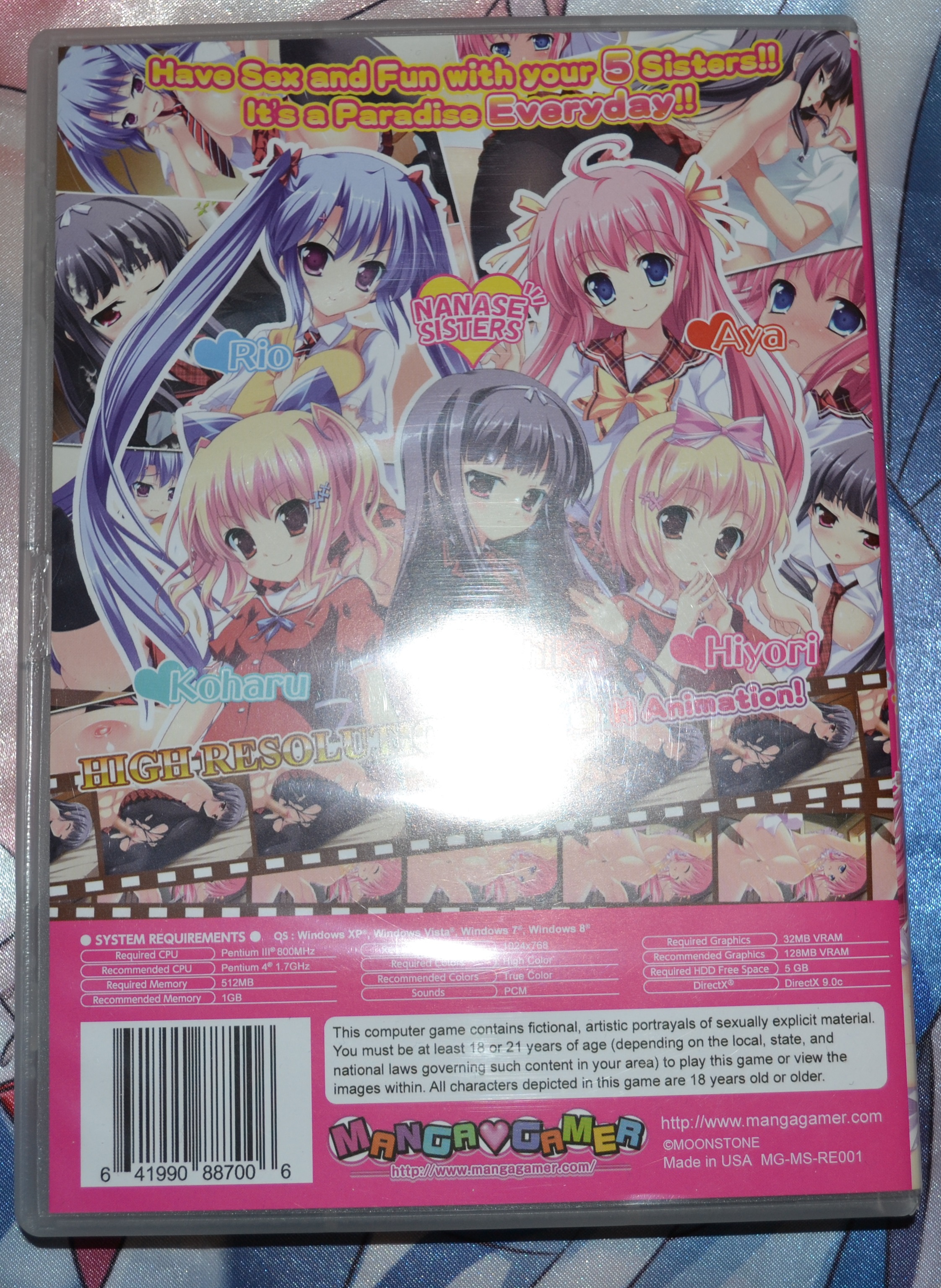 The inside including the disc 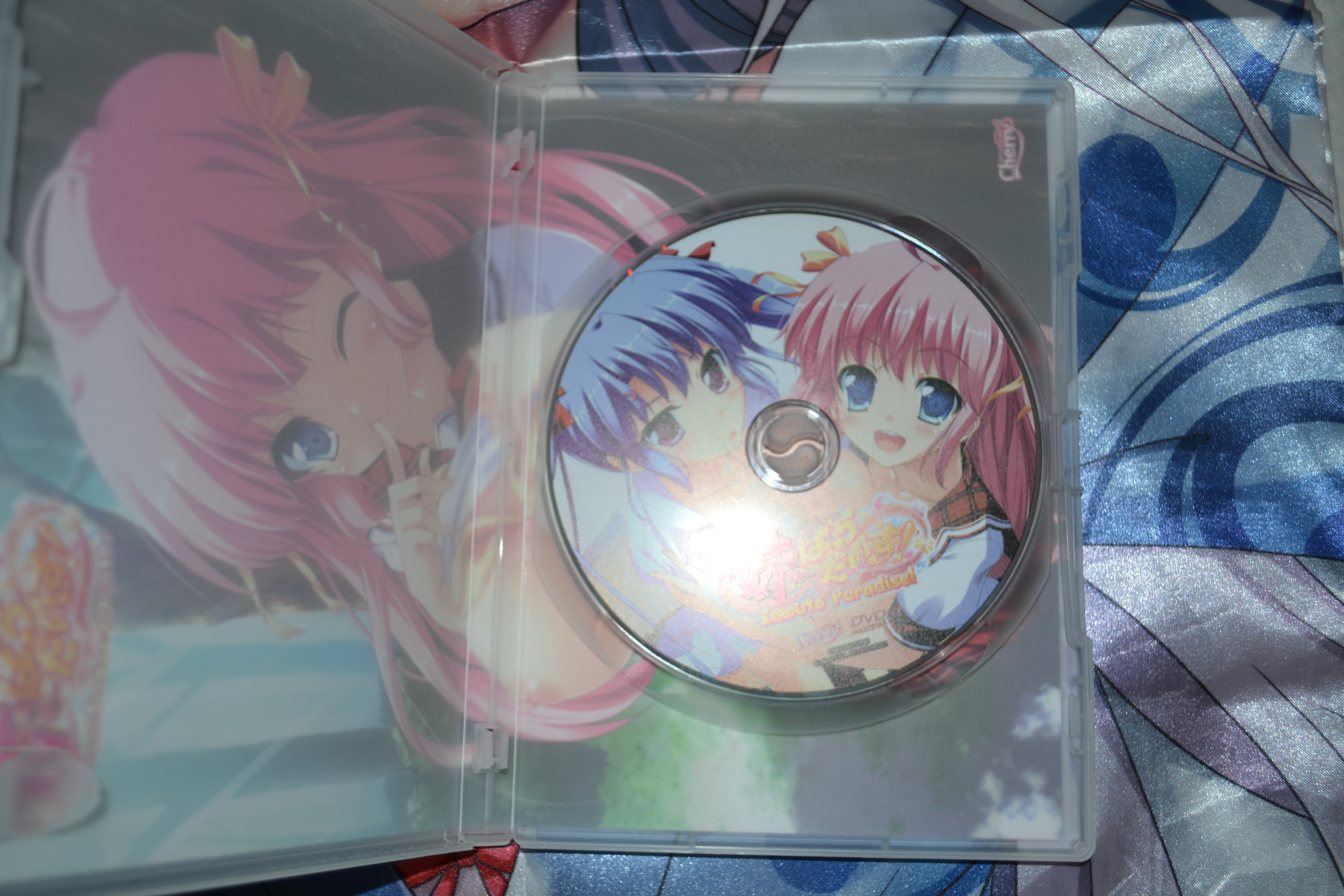 The reversible cover (think it works best on the inside) 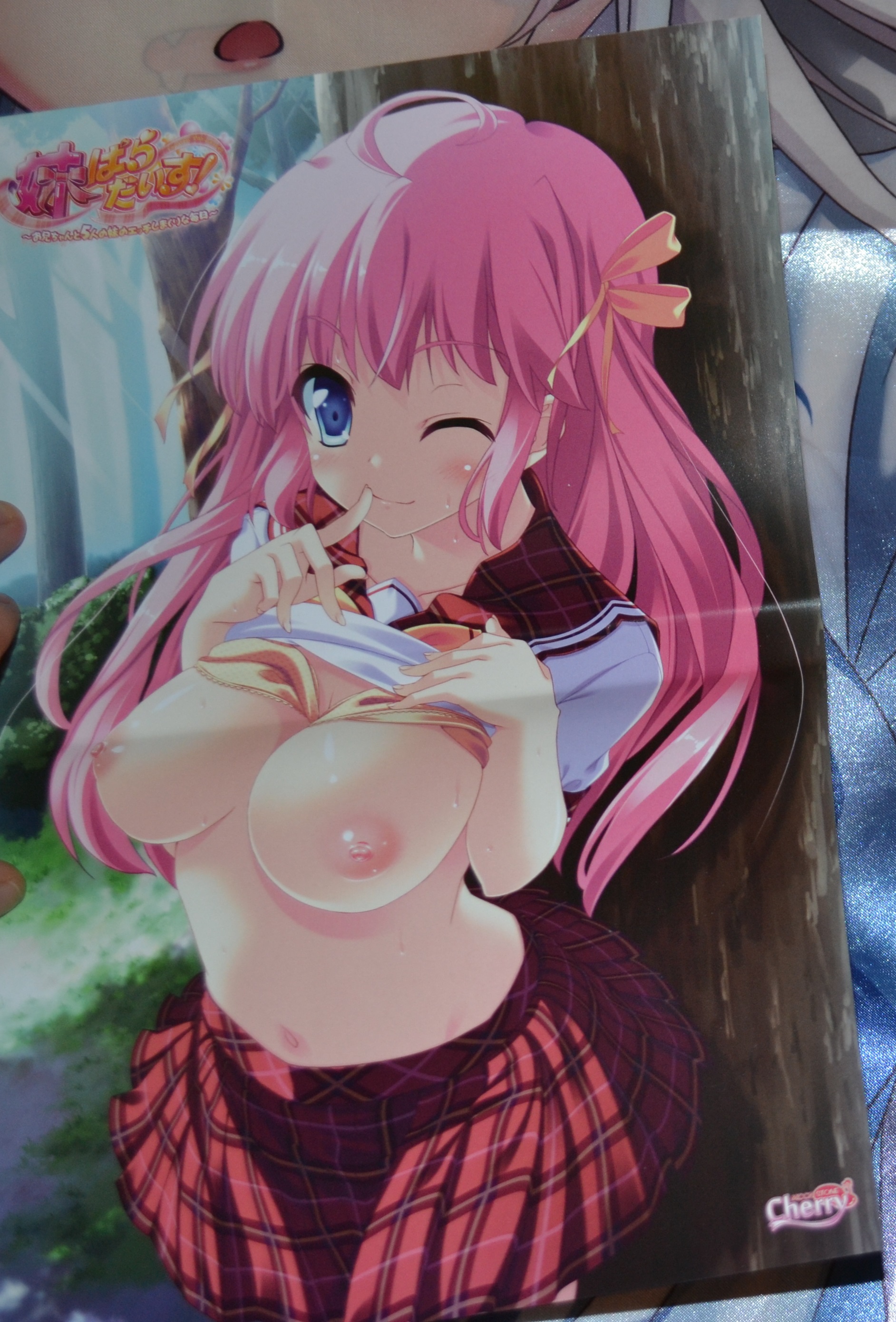 The physical copy is pretty standard and has nothing special, it is just a normal dvd case with a reversible cover. As for importing it well it does feature sexual artwork though it doesn't show the loli twins in any sexual position so that should potentially help against problems with importation related to anti loli laws.