Are you the kind of guy that loves stews but hates having to prep all the shit going into them? If so you’re uncomfortably close to being me holy shit stop. Anyway if you try to google up recipes for a pork stew using wine you inevitably get something that could be much simpler. Here’s my attempt at such a thing; I’ve cooked this twice and IMO it’s excellent.

INGREDIENTS (serves 2 if you’re me and my dad)

1. Brown the meat in your fat of choice on high heat in a saute pan. Salt and pepper those shits for good measure, though honestly idk if it matters so I cba to put them in the list.
2. Turn down to low heat and add wine, water, onion, garlic, chili flakes, and crumble in the bouillon cube. I usually mix it all together but who knows if this is even needed? Not le watakushi.
3. Let stew w/ lid on for as long as it takes for the meat to be nice and tender.
4. Serve with magically appearing rice I didn’t tell you about.

How do I know how long the meat will take to cook?

Since this is a general recipe I can’t tell you, but pork chops took ~1h 15m and store-tenderized pork chop meat took like an hour. Tougher cuts made for stewing might take as much as 2 hours 45 minutes or more. I also recommend the “google it” and “ask your mum” options if available. On your first time using a new kind of meat, I recommend sampling the meat at likely points. This will fuck with your rice timing which sucks, but so does life so nothing new there really.

How do I make this efficiently timewise?

The main timewaster is the slow boiling process, so the goal should be to get that started as soon as possible.

Start by cutting the meat into pieces unless it is already. After that use any downtime, for example when the fat’s warming in the pan or when you’ve just put the meat in and are letting it rest for some surface, to chop the onion / garlic. It’s not particularly important to add the garlic or onion or really anything to the stew at the same time as you add the wine, just get them in once you finish processing them.

Ok but I have beef not pork

Then do the exact same things and it will probably still work lol.

Ok but I have chicken not pork

Then make this high effort recipe instead. Or just try anyway. Cooking time will be much shorter though.

Ok but I have <other kind of meat>

We live in a society, dear reader. I’m sure you can figure it out.

That’s still too many ingredients

Fair enough. I don’t think the garlic is essential and chopping it is annoying so take it out if you wish. The chili flakes are also a bit of a flourish and you might not even like them so omit them if you want.

I would not omit the onion but if you’re a hater it probably won’t kill the dish entirely to take that out too, I’m never actually going to try that myself though so good luck.

Ok but I don’t have a bouillon cube

I will assume you have liquid broth then, use that. Otherwise supply your goddamn kitchen. Since broth will increase the total amount of liquid you probably want to cut down on or use no water at all. I have not tried this at home but like it’s a stew it’ll work out.

Actually I think a few more ingredients would be ok

I would suggest looking up more traditional recipes at this point but here are some things I have not tried: mushrooms seem like they’d fit in well. Carrots are also often mentioned though idk if I like the idea as much. I can also see bell pepper but I have a bell pepper fetish. As for spices you could try grated fresh ginger (obviously ditch some or all of the chili then I’m not responsible if you kill yourself with this) or maybe szechuan pepper. 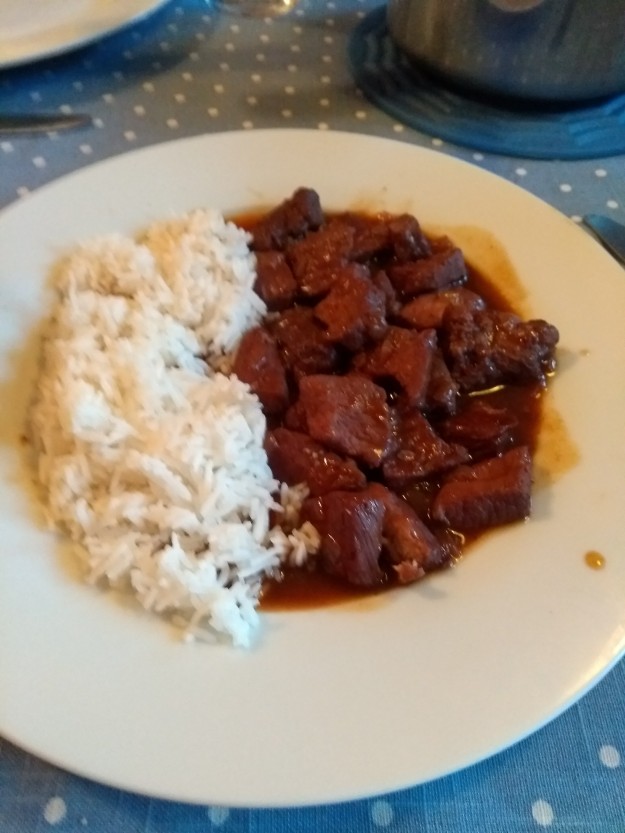