I recently finished Euphoria so I figured I should make a review of it.

As for the general story of Euphoria I feel like talking about anything other than the start could be a potetial spoiler so I will refrain from doing so. Euphoria starts with the main character waking up in a white room with a door. As he walks through the door he finds himself in another white room along with six girls. Of the six girls there are five students who are in the same school as the main character as well as one of his teachers. Once they are all gathered a mechanical voice tells them that to get out they need to unlock five doors, these doors are unlocked after the main character has done a sexual act with one of the girls, with him being free to choose who. One of the girls then refuses to participate, everything becomes black and when they can see again she is locked to an electric chair where she is electricuted to death. Now with the five remaining girls the main character need to complete the game to get out of there alive. So the first part here which I have given a short introduction to works pretty much like a nukige in that it contains a lot of sex scenes and that there are many fetishes involved. There are also some questions raised during this part as well as its importance in character building though all in all I would call this part of the VN a well written nukige. As for the later half, which I don't want to go into due to spoilers, well it contains way less sex scenes while doing a much better job at storytelling with giving you more hints as to what is actually going on. The recommended way to go though Euphoria is to read it in this order, Rika, Natsuki, Rinne, Nemu and Kanae, with Rika as the first route and Kanae as the last route. The reason this is the prefered way to play it is that it gives the best experience in terms of piecing together information from the different routes. As for what I think is best to categorize Euphora as I would say it is a mystery psychological horror visual novel.

Well now that my introduction to Euphoria is over I suppose I can start the actual review of it.

Firstly I want to talk a bit about what I though about each route induvidually.

I guess I should start with Rika, well her route is pretty bad. The first part of her route was to me the worst part of Euphoria. The main character came of as an irredeemable evil person and Rika is just really annoying. This caused me to not really enjoy the sex scenes or any of the other scenes where you interacted with Rika. As for the later half I found it to be much better. I would say this part is pretty decent and the story here is pretty interesting, Rika also becomes much more tolerable and the main character comes of as a much better person than he did in the first part of her route.

The next route is Natsuki (the teacher), I found her early route to be much much better than the early route of Rika. The back and forth between her and the main character was quite interesting and she is a really likable as a character. Due to her being very good at pushing back against the main character he also became a lot more interesting as his internal strugle became quite clear. As for the later half I liked it quite a lot, her later half I would say is a bit like a horror action story.

Next up is Rinne, as for her first half I though it was quite good, her sex scenes really did a good job at showcasing her personality and there were also some really interesting conversations with her during the first part. As for the secound part of her route, well I found it absolutely amazing, it was just such a good twisted physological horror story and it had me at the edge of my seat the entire time. I remember just being in awe at how interesting this route was. I also think this route is the one that did the best job at implemeting sex scenes, it worked really well with the story and with the atmosphere of the route. Due to this route I got completely hooked on Euphoria and marathoned the rest of it.

As for the nemu route, well I think she has the best first part. Her sex scenes were quite extreeme, but you don't feel bad for her at all since it is Nemu. Other than being quite extreeme her first part also raises some questions about her as a character showing that there may be more under her surface than what can be seen. As for the secound part of her route I found it really interesting though not quite as good as the secound half of the Rinne route. The route was really cruel, but also had quite an interesting story.

Then lastly is the Kanae route. Her sex scenes during the early part is okay, not really that good or that bad. Though the early part does a pretty good job at forshadowing some things.

As for the secound half of her route I suppose I should split it into two parts since there are two ways her route can play out.

One is a route that has the main character doing really horrible things and seem to be there mainly for people who really want to see messed up sex scenes. This is a rather short route and doesn't really feel that important.

The other route is the true ending route. This route was to me the best part of Euphoria. This route start of as a complete mindfuck that I just found extreemly interesting. After that the route then start to explain in details what has actually happened and it becomes a really emotional story that had me almost crying at times. The last part of it was just wonderful to experience and it was just such an emotional roller coaster which at the end left me really satisfied. While this route answered most of the things in the story I was still left with some questions about certain things, though I think those are meant to be left as mysteries.

As for my final thoughts, well I absolutely love Euphoria. It started of pretty bad with the Rika route and at that point my expectations were a bit low, though as I played through more routes it really sucked me in. I think it did a really good job at mixing the sex scenes with the story and I liked to play it all in its entirety. Even though it has a lot of sex scenes I would still recommend it even if you have no interest in the sex scenes. The story on its own is extreemly good and is definitely the highlight of the VN. While I said the first part of it can be considered a nukige the same can not be said for Euphoria as a whole, the story part take center stage once the first part of the route is done and the later halfs of each route is just so much better than the first part. Most of the time the sex scenes aren't really important to read and it is enough just to generally know what happend which means they can be skipped. As for which sex scenes I think would be most important to read if you are fine with reading them but want to skip most of them, well I think the sex scenes in the Rinne route as well as early Nemu route is the most important ones to read as these actually feel like they add to the characters and story, though I would still say their routes are very good even without going through these scenes.

Here is the cover of the physical edition 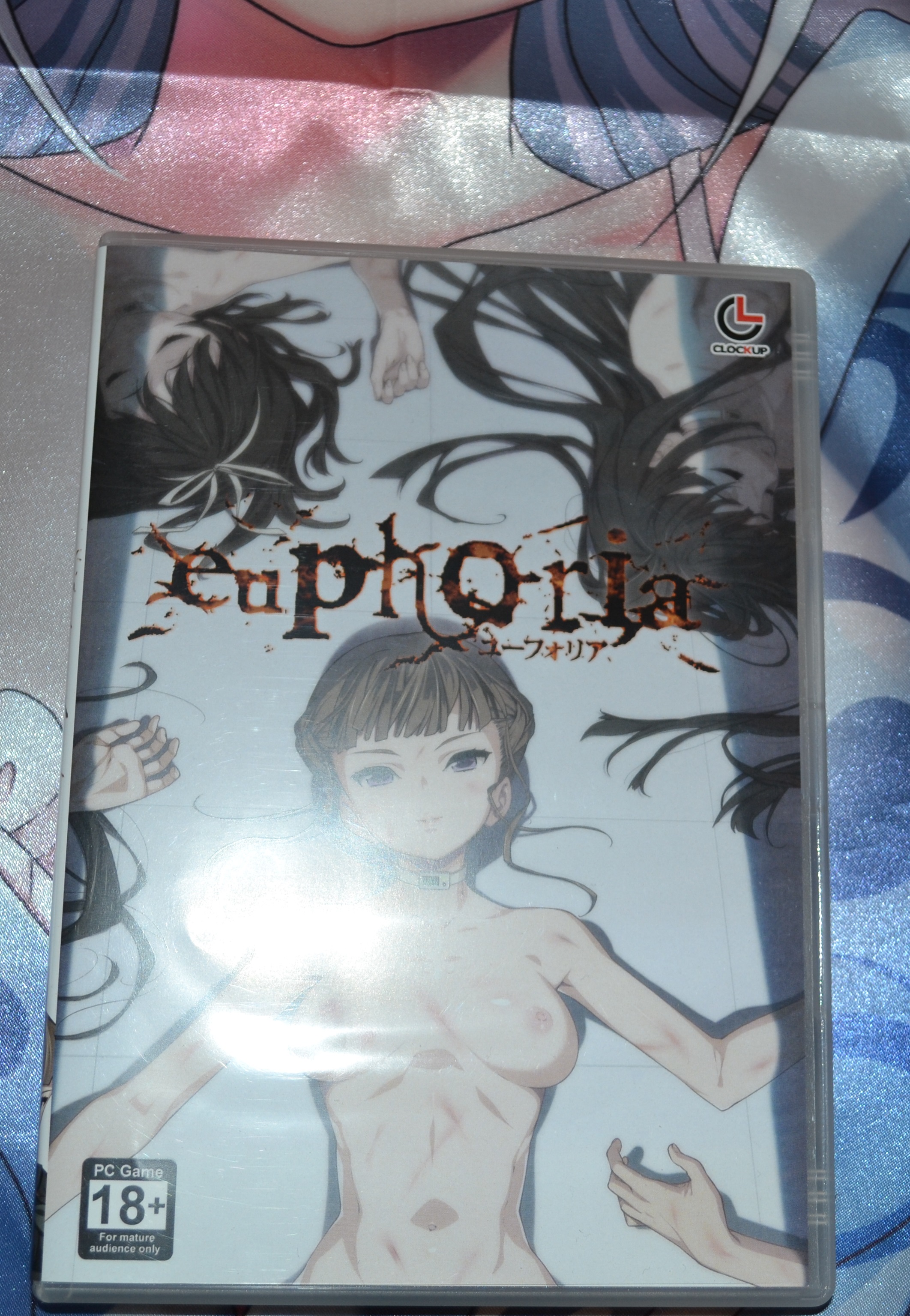 Here is the back of the physical edition 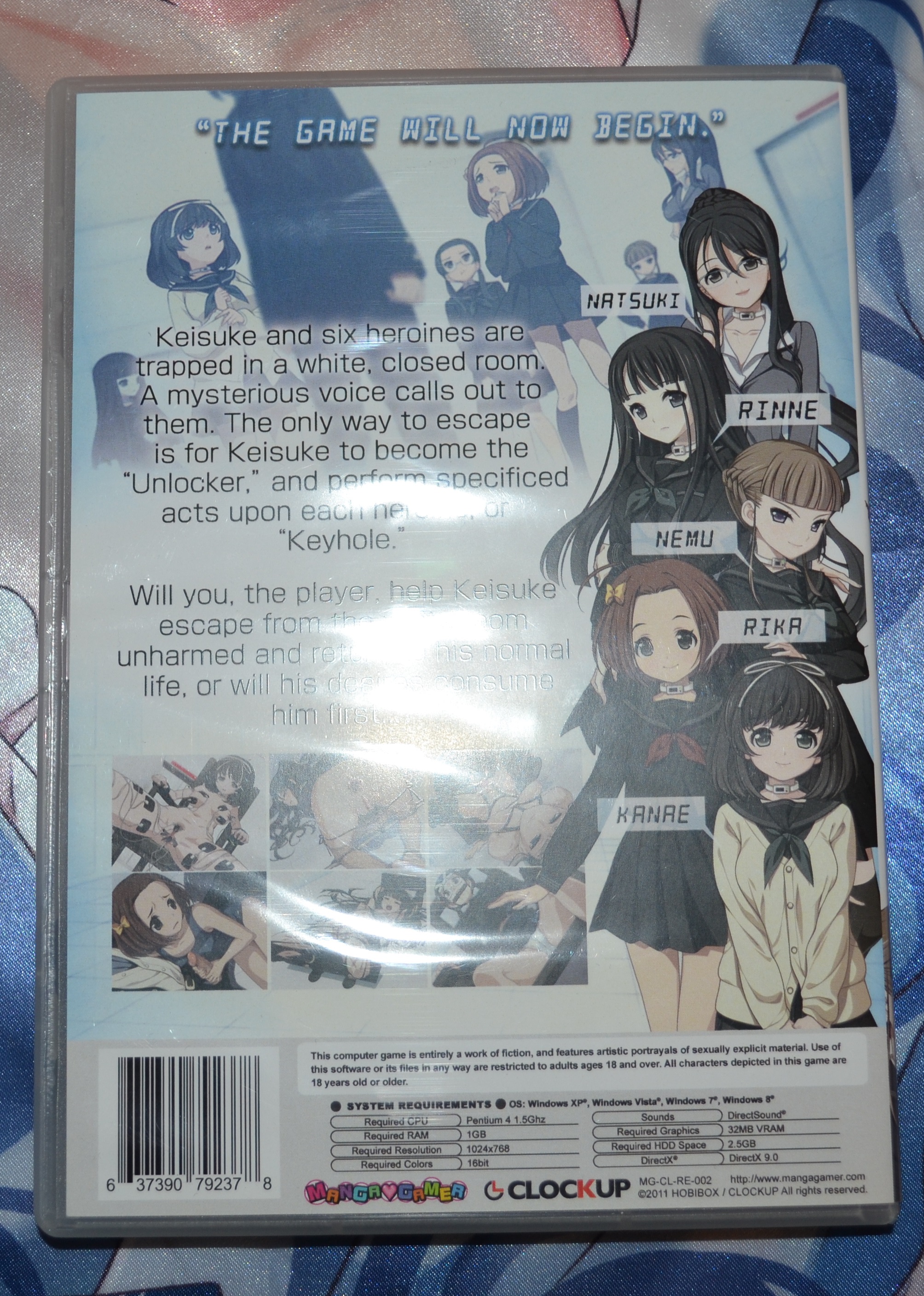 Here is the disc of the physical edition 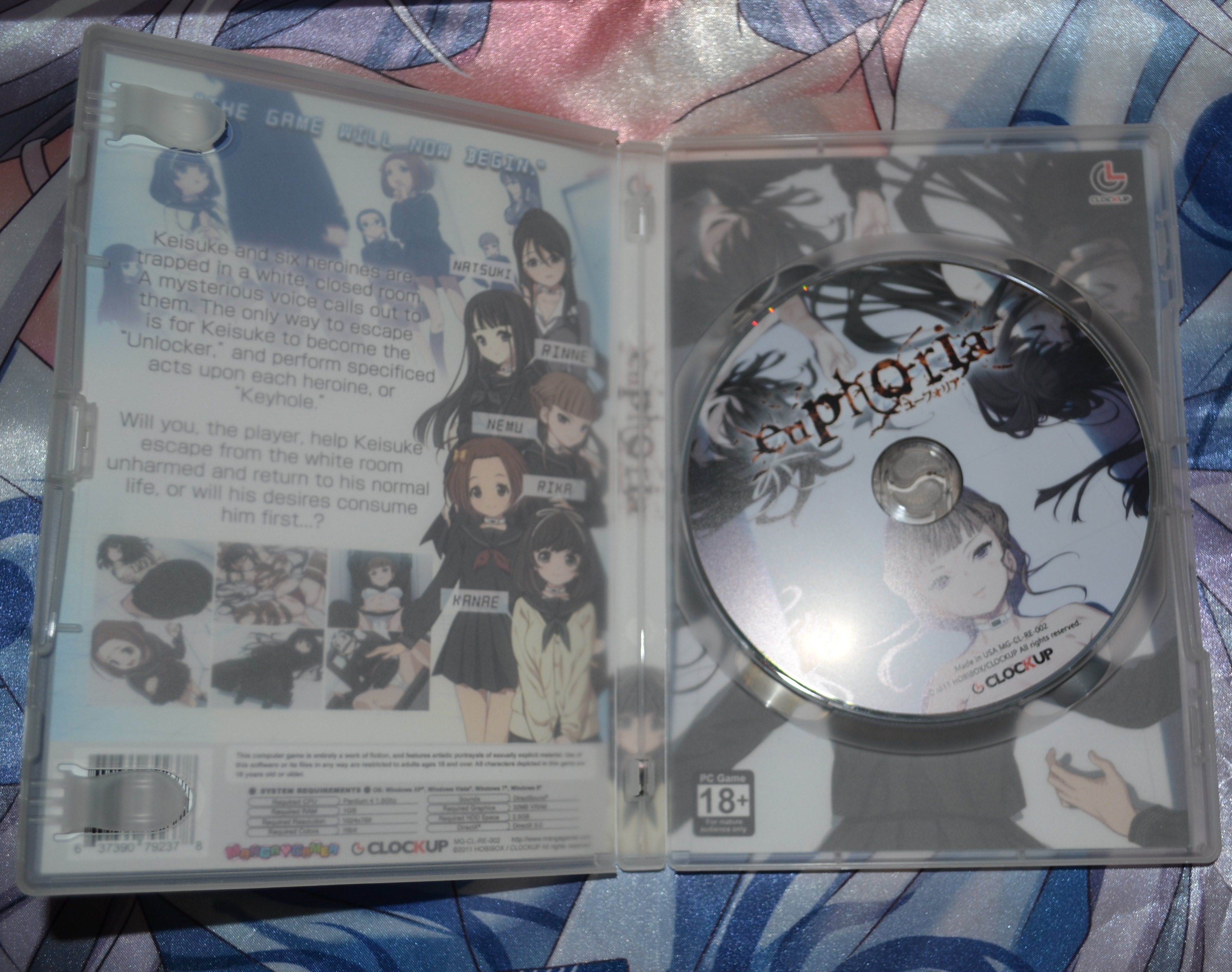 The other side of the reversible cover 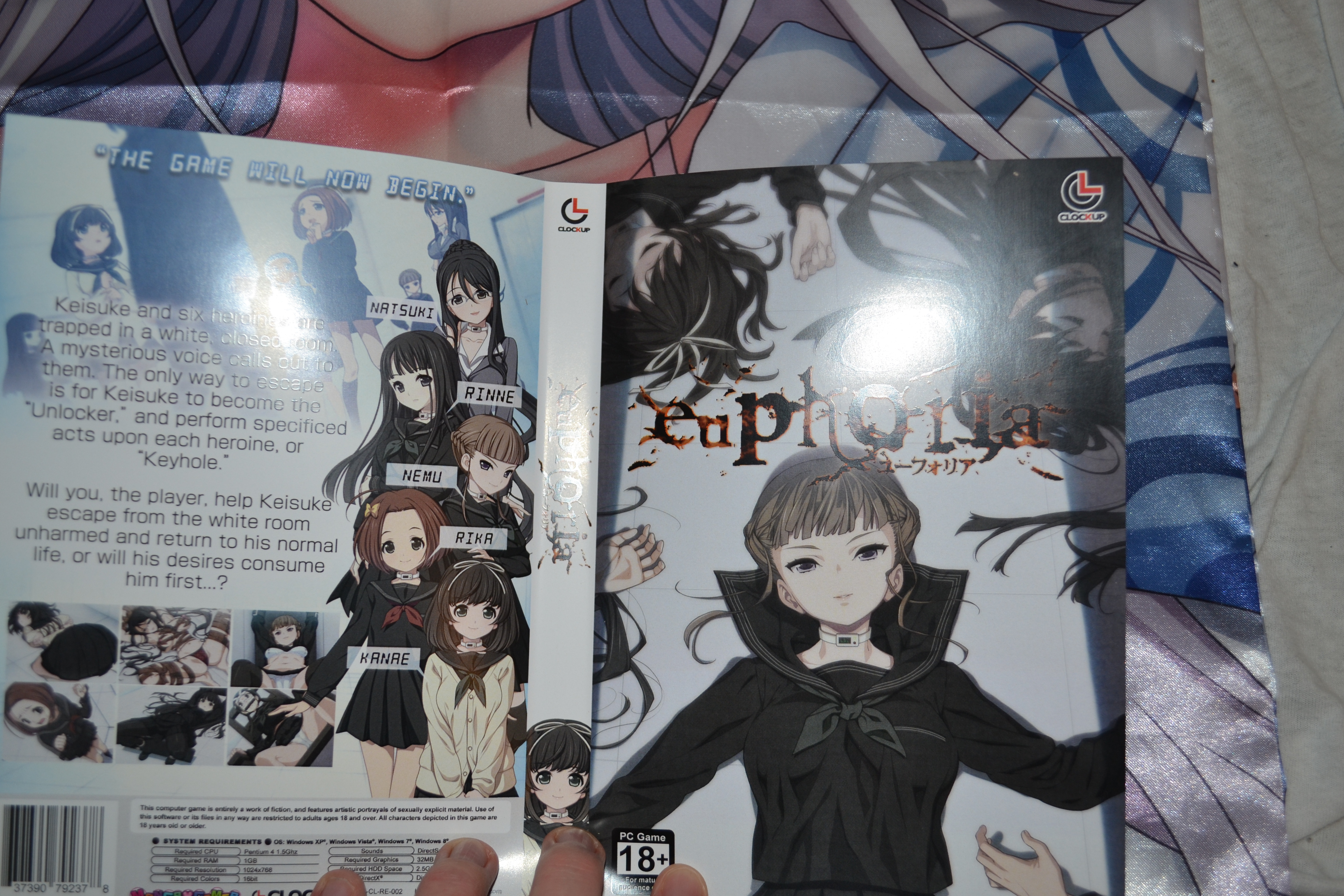 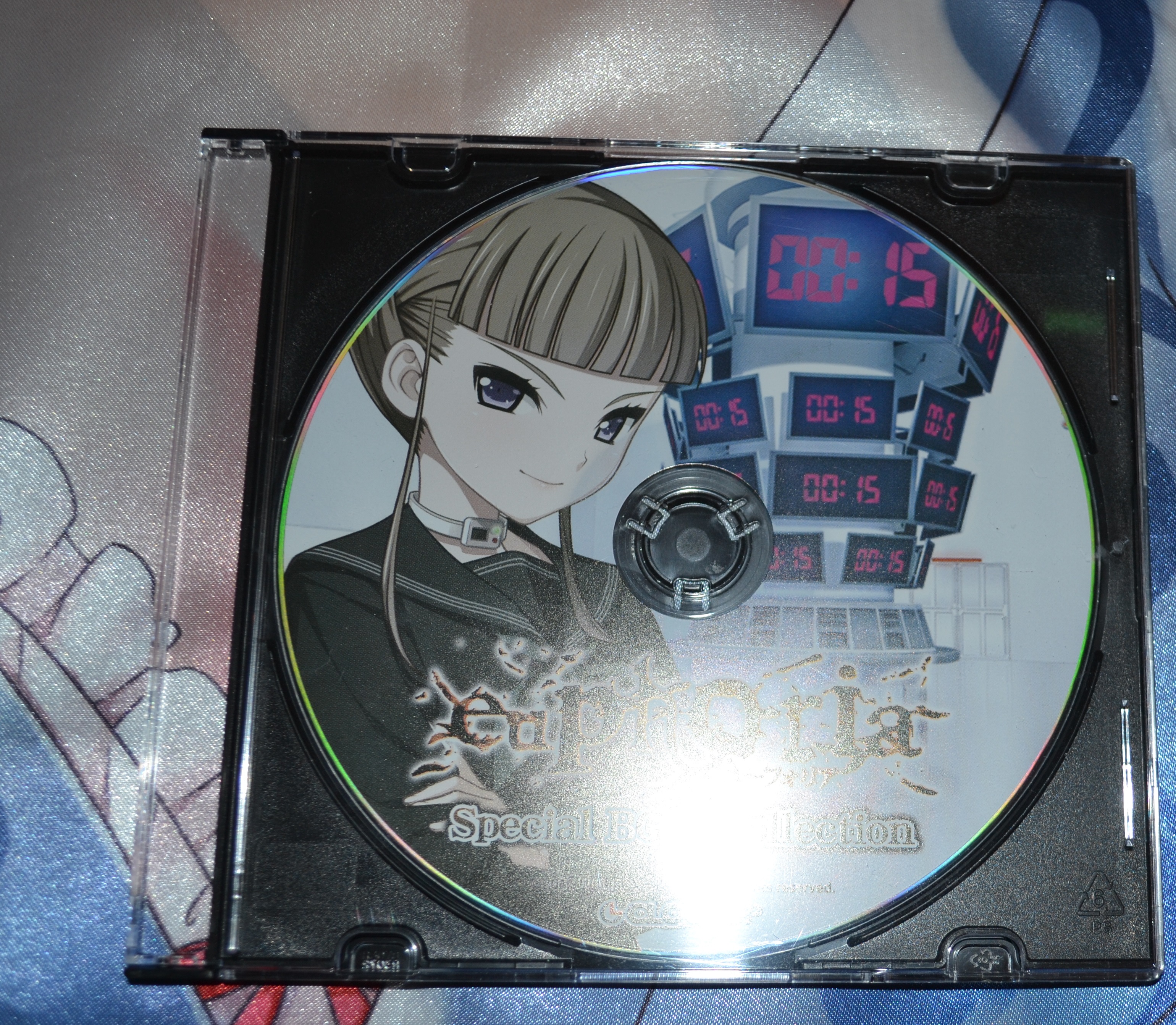 As for my review of the physical edition, well this is a pretty standard hardcopy. There really isn't anything extra other than the BGM collection, which I don't know if still follows with the hardcopy since it is a limited time bonus (I got it when I bought mine in November last year). Since the physical edition is quite standard I would only recommend getting it for people who just want to have a physical edition of their VNs. One thing that I think was quite nice is that the cover doesn't show any nudity, this is nice since it is then less likely for there to be problems in customs when importing it. Also if you want the nudity on the cover you can just turn the cover around and display it that way since it has a reversible cover.