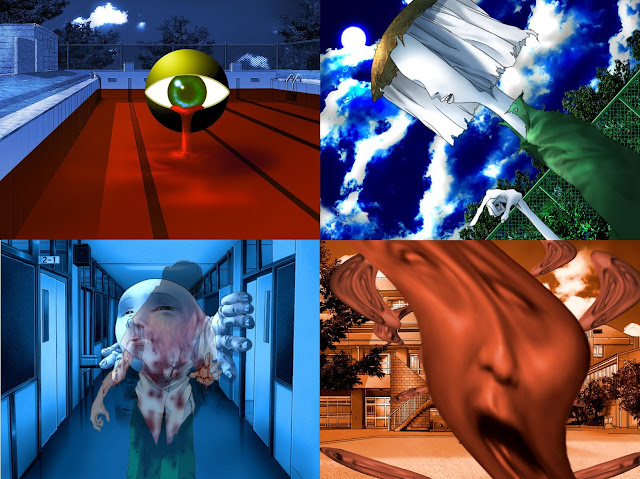 
Synopsis: Our guy got waked up by his childhood girl for school. Once they got to their classroom, they found out that a girl classmate jumped from their school roof yesterday. Soon, people started talking about end of the world on day 20th. Some even went crazy, lead by one guy. You get to see the events first through our guy's eyes, then his childhood girl's and two more people.

Difficulty: Easy since there are only 3-4 decisions to make. 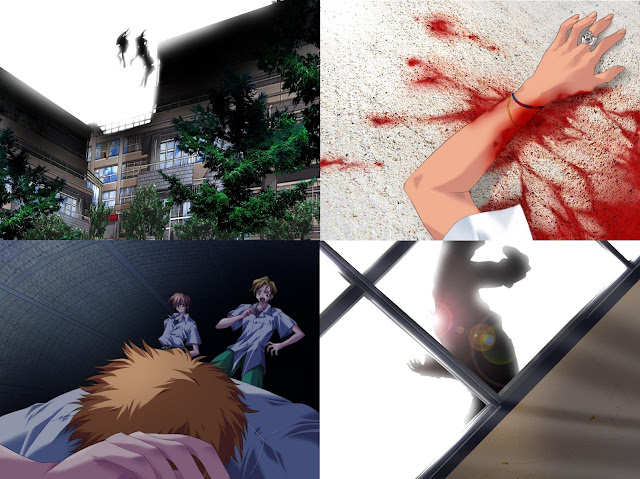 Rating comments: I did not expect such high scores. Characters aren't voiced, but somehow they manage to feel alive. There are so many protagonists in this game that the rest of characters are easy to understand and remember. If it was only for Yukito, protagonist would get a full 10. Story does not seem anything special on the first glance, but with each route it opens up new depths and raises new questions making it a very integral, memorable and personal experience. I can't rate game quality good for the lack of CG, unvoiced heroes and macromedia director engine.

Yukita makes the perfect protagonist for me. He cites Kant, Wittgenstein, Kierkegaard, Bible all the time. He looks like a hooligan, but is absolutely faithful and reliable even though he tries to shrug it off with crude words. He's pretty much the only one who stays calm, trusts in logic and comes to everyone's rescue.

Kotomi is Yukita's childhood friend. She is quite nice as a heroine, but when she becomes protagonist we get to see her constant hesitations and anxieties. It's a pain to see her crying "I don't know anything anymore", thinking "I must be alone and get stronger" and running away from Yukita at school.

Zakuro is the classmate of Yukita and Kotomi. At the beginning of the game she's already dead having jumped from the roof. But her story was the most impressive one for me. But more of it in the story part.

Takuji is the villain of the game. A shy small boy who at the same time wants to peel everyone naked and sentence to death. He's really cool as protagonist for having all kinds of hallucinations that make the game a mind-screw.

Characters: Who do we have left? There's classmate Otonashi Ayana who has her own route, but is not a protagonist for she's the most mysterious character in the game and her manner of thinking should not be revealed. There's also classmate Yokoyama Yasuko who enters the same kendo club as Kotomi, but at the same time really sympathizes Takuji end of the world ideas. Yasuko brother is the biggest supporter of Takuji as well. There's also guy Ozawa that bullied Zakuro, but at the beginning of the game he's dead. There's a magical girl Riruro, but her existence is under a huge question, hehe. We also have medical department teacher. 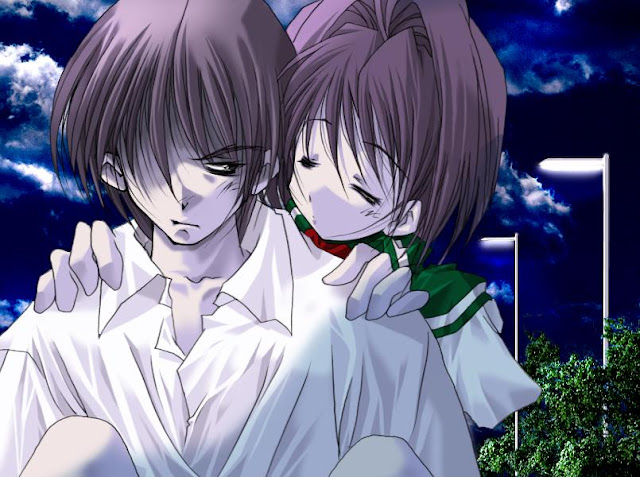 Story: I can't really tell about the story without some spoilers (although I'll try to hide heavy spoilers under a banner), so be aware.

I. Game starts from Yukito perspective 7 days before the disaster and he can opt for either Kotomi or Ayana as the main heroine. The choice only determines couple short scenes of each heroine and determines whether Kotomi H event opens up or not. The contents remains the same. First two days are spent in mass neurosis as classmates keep jumping from the roof and rumors about the end of the world keep spreading. Then there are two days of open conflict of Takuji with the school that result in dangerous cult creation. Next two days are notable for Kotomi kidnapping by the Takuji group and her rescue by Yukito. The final day is not clearly shown.

II. Then starts the route of Kotomi which is exactly the same route, but from the eyes of Kotomi. She's there mostly to add girlish thoughts to the narration and of course to show her two days of captivity and torments (read: H events) while kidnapped. So it's kind of non-important fan-service route.

III. Well, when you think that the game is over, the next route opens up. And instead a week before the disaster we go to two weeks before the disaster to the body of Zakuro. She got raped and made photos of by bully Ozawa one day and from that time was blackmailed into intimate relations daily. But once she gets a letter saying "Rejoice, your torments will end tomorrow". Since it's the most impressive route for me I'd only tackle it under the spoiler banner.

IV. The seven days before the disaster are shown yet again, but from the eyes of main villain Takuji. We get to see how his ideas are formed, what pushes him, how he recruits allies and eventually names himself the savior of humankind. From that point it's hard to determine delusions from truth as he sees monsters, magical girl Riruru, her spirit father and gets instructions from them, but most of the time he seems to just be talking with the graffiti wall. He starts as savior of humanity, but through demonic teachings soon recognizes the need to purify humans before the final skies by killing them. The longest and weirdest route, but at the same time it still feels light.

V. Epilogues sheds light on events after the day X and give more questions than answers.

So let's start with the Zakuro route. The next day after receiving letter her offender Ozawa jumps out of the window right in the middle of the class. She hurries to the trash bin to recover the letter and it instructs her to meet the sender at the station. There she meets two cute young girls who say that they were blackened in the same manner. But through humiliation they recovered the memories of the past and shared those with Zakuro now. They are the warriors who keep reincarnation through the time to combat the end of the world. They have postponed it multiple times in great battles of the past, but in order to get enough strength for that they need to revive with superpowers. The next day they all gather at the roof of the school and are deadly terrified to jump down. But as the window of the possible reincarnation presses down, they take each others hands and jump from the roof... the end. Just WoW. The slice of life drama turns into affectionate eternal war of light and darkness, but only IF if you believe in that. They can be as well idiot fanatics to throw away their lives in vain - you decide.

Next is Takuji route. He organizes mass orgies and kidnapping of Kotomi. But what delivers the most is his imaginary talking to the magical girl Ririru and same imaginary sex with futanari Ririru and then futanari Ayana. He makes about a hundred people commit suicide by jumping from the roof, then confesses his love for Yakuto and jumps down the room himself. So here's where SubaHibi yaoi roots originate. Really crazy route where he compares himself to a famous dictator.
The epilogue shows us that nothing really happened after the Doomsday. But as they sit in the cafe on the 20th June Ayana kisses Yakuto, bids him farewell and suddenly Kotomi appears at her place. Kotomi says that it's 1st September and she's never heard of Ayano girl. And as Yakuto and Kotomi decide to stay forever an eternal sadness pierces that promise.
In Ayano epilogue they talk with Yakuto about the essence of world, its beginning and ending and make love.

CG: Too few! But characters standing sprites usually look so good that the lack of CG is not that grave.

Sound: BGM includes few, but atmospheric short cycled compositions and there is no voicing at all. 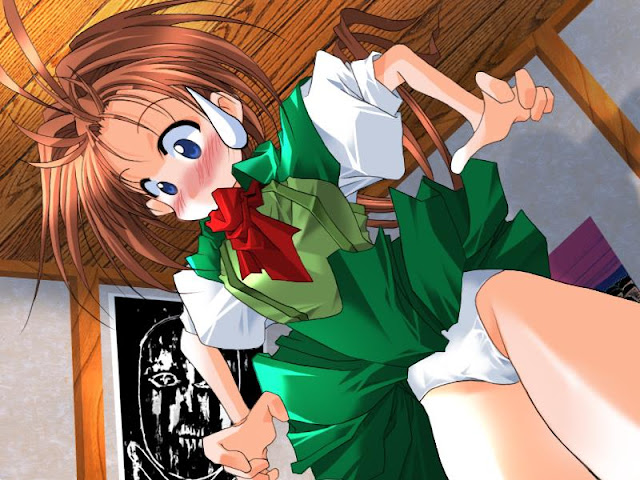 Humor: Apart of this funny moment of skirt flipping there was one real joke. Yukito and Ayano stay at the roof. Ayano asks "- What book do you hold in hands?" "- Kant" " Why would you need a book about girl's genitalia?" "Wrong! It's not about that!" "So it's called just CAN'T? Why would you need a book about impotence?" Then he tries to tell her Kant and Wittgenstein theories. "Wittgenstein? Is that the male apparatus?". I don't remember any more moments, but for me it's important to have at least one funny memorable moment.


Themes: There are a lot of themes.

1) Is the end of the world possible? Yakuto tries to find an answer in Kant, Wittgenstein, Kierkegaard and Bible books. He uses Kant's antimony to make a conclusion that the beginning of the universe is not provable and thus there can't be the end of the world.

2) The war between light and darkness forces to impede/fasten the end of the world - is it real or imagination of fanatics? One certain route is devoted just to this theme.

3) Who actually saved the world? Was it Zakuro, Ayana or maybe even Takuji? All three came to contact to the higher essences and could influence that. Of maybe the world never needed to be saved and those are just superstition and ignorance? We have to figure it for ourselves.

4) The separate question is who is Ayana? Her every word is mysterious. She does not have parents, but she's always present at the most gruesome events late at night at the school.

5) What this game is even about? Again, you decide, the first two collages of screenshots allow to treat the game as spiritual mind-screw, youth criminal drama or eschatological religious confrontation of heroes and devils.

Overall comments: I have not read Subarashiki Hibi and can only judge it by reviews and vndb. But what I see there is that the core of the plot and the characters are absolutely the same. SubaHibi was enlarged immensely to fit the modern demand, but such detail would not be possible without this little weird gem from the 1990s. 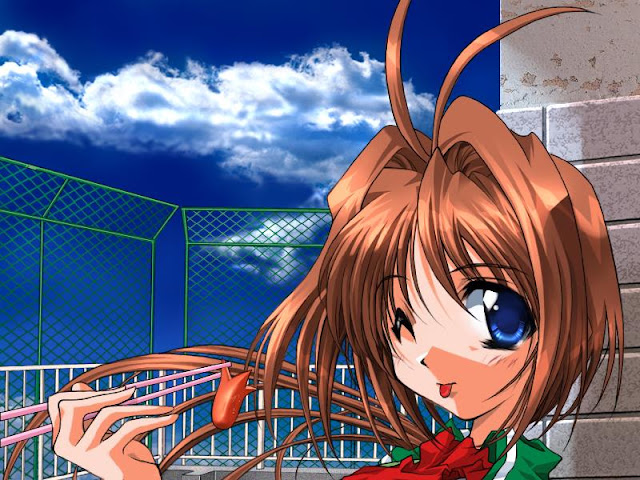