Disclaimer: I played the recent fan translation and from my (limited) knowledge of Japanese, I found it to be quite accurate. I was actually surprised by how the translator made certain sentences work and I can't recall an instance where I thought the translation looked strange.

When Hajimete no Okaa-san's fan translation came out, it caused a tiny yet significant uproar on certain visual novel related communities. The English idiom that spans over a century - don't judge a book by its cover - could possibly have been created for this very moment. I hope that by writing this review, I can clear up any misconceptions about this novel, teach you to not judge a work by its outward appearance and give you the courage to read a truly touching story.

Dealing with the loss of a loved isn't easy, no matter if you're an adult or a child, and even more so if the person in question is an irreplaceable person that you've vowed eternity to or that defines your complete existence. 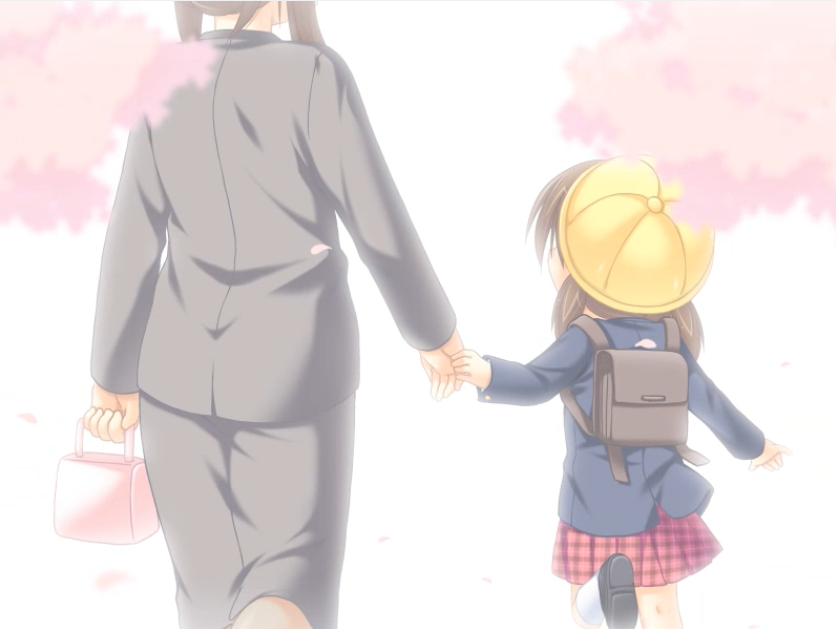 When our unnamed protagonist, who I will refer to as "Papa", loses his beloved wife to a traffic accident, he is left with the troublesome task of single parenting. Confronting the sorrows of one who has been turned into pure white ash, he finds solace in the one and only person who could understand him and also the one who might be suffering the most - his one and only daughter Chiyori (Chii).

Hajimete no Okaa-san is a very special Visual Novel. Unlike the disappointing standard of recent releases, it treats both its audience and characters with the respect they deserve. The most significant difference between this novel and the many others is the fact that its willing to portray the characters as real human beings. Please allow me to mention that there exist only eight translated visual novels with the "Widower Protagonist" and likely no other that focuses as deeply on the theme of single parenting.

The rather simplistic approach to emotions is surprisingly expressive, although one could argue about the emotional depth of a 6-year old, I was able to completely grasp both the personality of Chii through the brilliant performance of seiyuu Amakawa Milk (a respectable veteran in her own right with a wide palette of roles) and the internal monologues of Papa.

The beginning is rather surprising. The amount of effort that the creators have put into this work is nearly palpable, often leaving one surprised at how nicely written and how well the narrative flows. Starting with ordinary slice-of-life scenes, we're thrown into the daily life of Papa and her daughter Chii. Starting with the smallest things like learning how to write hiragana and her own name in Kanji, the basics of arithmetic, giving up one's fork and knife and mastering the use of chopsticks - they are all endearing moments that help us connect with Chii as a character and reminding us of times long past of our childhood when everything was much simpler. It is this genuine and pure simplicity that initially made this novel stand out.

In contrast to this feeling, enter "Chii wa kodomo janai!" - Chii is no longer a child. Her own desire to find a way to deal with her own sorrows, all the while supporting the one person she loves most in her world, one of the most satisfying factors of reading through this novel is observing Chii's maturity as a character.

Despite the more lighthearted scenes, the novel is plentiful with well-timed drama which never for a moment felt excessive or artificial. Papa is stuck in a constant internal moral debate which at times stops him from realising the suffering of those who are right in front of his eyes. 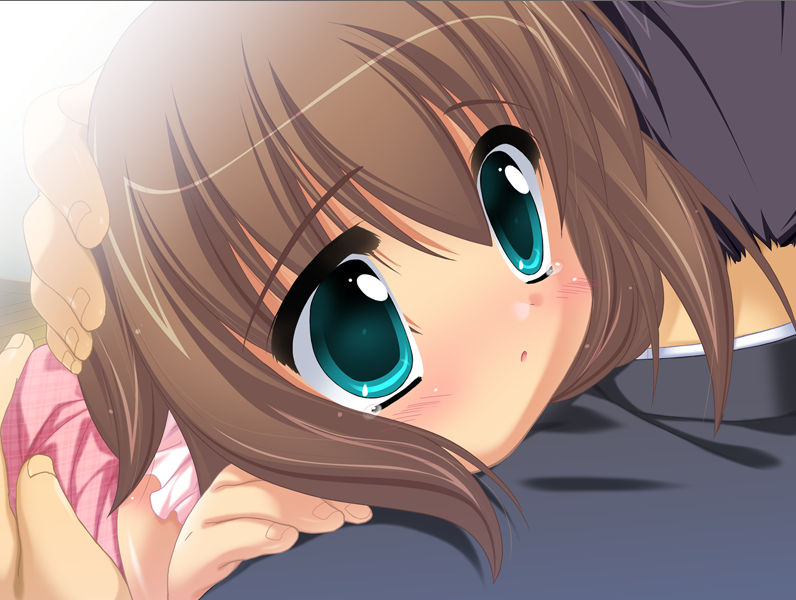 As far as storytelling goes, one of the biggest attributes ishow the reader has the freedom to change the course of the story (albeit into premature ends). As for this aspect, I would like to divide the story in three or four parts (I will just say that the forth part is a Web Omake, essentially a short epilogue that portrays the life of our two, now three characters after the events of the main game).

The first being the first two hours where we accompany the characters until the inevitable H-scene. Here, the reader is given the choice to not go through it at all and completely avoid the H-scene, ending the game prematurely. To not give in to his dark desires and not abandoning one's morals, is too a possible answer that Papa can find.

The second part and probably the longest, accompanies our two characters as their relationship develops. The most important aspect that I'd like to bring up is that the whole theme of pregnancy is treated. In many eroge, pregnancy is either completely ignored, allowing our most likely 16-year old protagonist to let out his seed without any worries in the world, or treated as an afterthought, perhaps featured in one last H-scene before the game ends. In this novel, not only do we see their relationship flourish but the passage of time, told by the growth of Chii's belly and change of hairstyle (over five different character sprites!), shows us that this is aspect that is willing to be embraced, often being the case for worry for our protagonist.

At the end of the second part, the reader is given another important choice: to go beyond mere carnal desires and a parent's desire to protect his child and thus taking their relationship to the next level, or to once again fall into self-hatred and not take responsibility for one's actions. Thus begins the third part: "I want Papa to always be by my side". While perhaps as long as the first part, it's perhaps the one with the most emotional impact. Vowing to combat loneliness, Papa and Chii realise that being surrounded by the people you love is far more important than having a peaceful life. Chii does not become a replacement - she is her own person and the most important thing in the world to our protagonist. As long as two people can love each other, that is more than enough.

And as long as there is love, there is warmth. A new family is born. The two become three, the warmth keeps rising and it spreads to others around. When I finished reading Hajimete no Okaa-san, I felt a warmth deep inside of me because I realised I had just been through a really special experience. With this review, I hope that I convinced you to read this beautiful story and too come to have warmth in your heart. Thank you for reading.

https://imgur.com/a/FpPkAxp (This might be a little of a spoiler so I won't post it as an image, but it's the last and most impactful scene of the novel)

I am open to criticism and would be happy if you could help me improve as a reviewer.