Nitroplus sure is popular and there's always hype surrounding their games. Their imprint Nitro+CHIRAL receives the same treatment by the BL fanbase. And that was one of the reasons that I was afraid to approach their games. Overhype frequently kills anime and manga for me, and I believe that the more a media is popular, the more parroting we see instead of legitimate opinions, I can't even count the times I read reviews that, if you erased all positive adjectives, you ended up with nothing. Even so, I tried to play this game because its plot was genuinely interesting. Too bad it got so easily abandoned halfway through the game. 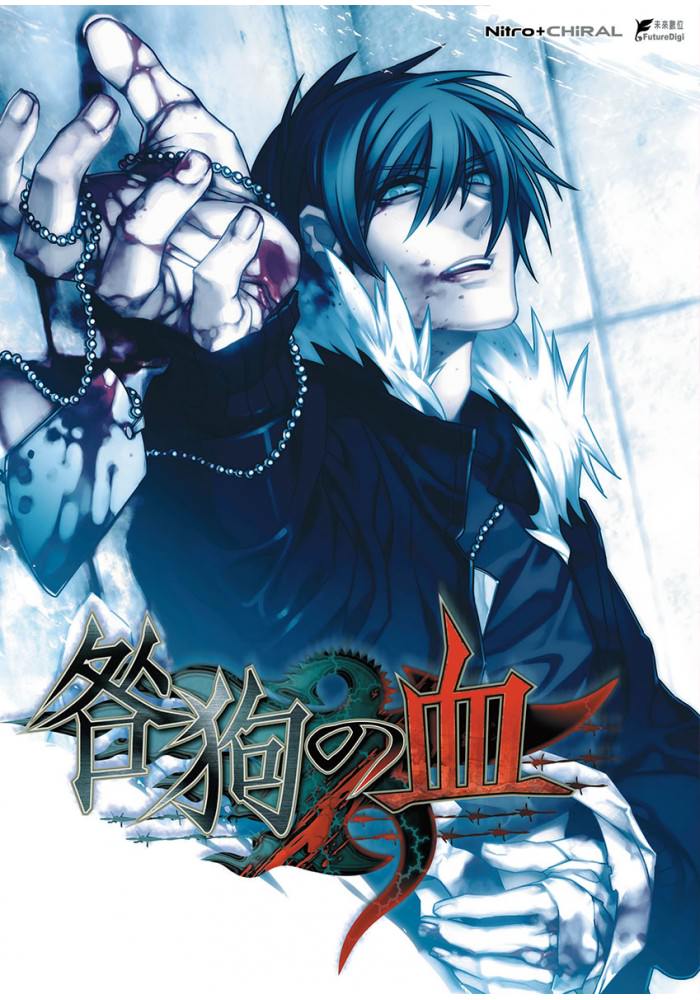 Game's cover is more badass than the game itself


Togainu no Chi, Nitro+CHIRAL's debut title released in 2005, tells the story of Akira, a champion in some turf war style game, that got falsely accused of a crime. Japan is in a pretty post apocalyptic state and its society is falling apart so he had almost no hope in ever clearing up the misunderstanding. Except a woman named Emma appears before Akira with a deal to free him. And for that, he have to enter another game, this time a battle royale, named Igura. Accepting the terms, Akira travel to the ruins of Tokyo, where Igura take place. The world building is well done and full of good ideas, that unfortunately falls flat when you reach the character routes. The game takes its time to explain all rules of Igura and show all of the weird quirks the game master added just for fun, just to gives us like two fights and then shift the focus of the plot to something else. Of the five routes, only one actually elaborate a bit more about Igura and that ended up being my favorite route. Of course, they tried to tie the Igura plot with the game's true plot, but the excuse they used still doesn't make Igura actually important for anything.

This feeling of disconnection between the beginning and the later parts of the game was so strong that it almost made me want to try the game's trial. Like, the prologue had special portraits for characters that had only one scene worth of appearance (the game have three or so base NPC faces, but these guys are different), three completely useless character had sprites, there's a fighting sequence with some homeless people that acted like wild animals that's never explained or even mentioned again. I do wonder if the game was supposed to be one thing and because some development problems it became something else... 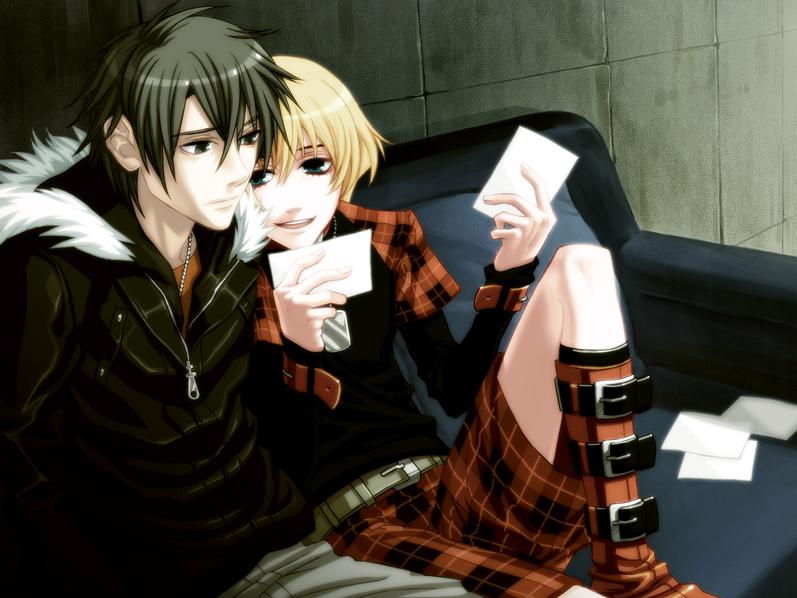 Even Akira is sad with how the game turned out...

Now for the characters. First we have Akira, the main character, and mostly a silent badass type of guy. Or that's what we expect him to be based on the prologue. For a said champion, he's overpowered way too easily by pretty much any character that cross paths with him. Add the fact that after 90% of said defeats his opponent states how pretty Akira is and how much he wants to rape him (of course, stating too that he doesn't care if he's a guy), and we have one of the most "damsel in distress" MC I ever saw. The thing he said the most in the entire VN is "let go!", seriously (his "hanaseyo!" just played in my mind). Sure, he accomplish some things by himself, but nothing end game tier. He just goes where the plot carries him, over and over again. And to make things worse, his development is tied to the fact that he should warm more to others and not to his uselessness in combat.

Among our five heroes we have: Keisuke, the clingy childhood friend; Rin, an energetic shota; Motomi, a laid back older guy; Shiki, the edgelord that goes around killing guys with a katana and vanishing the next second; and Nano, a mysterious guy that says a lot of things that doesn't make much sense. We also have bad endings with Arbitro, a super eccentric guy, and his two bodyguards Gunji and Kiriwar, but they're pretty short and not really plot relevant. With the exception of Shiki, all of the others have some character growth.

Personally, I loved Rin's and Motomi's routes, since it developed well not only each character, but also the couple. You can see them growing up and moving on together. Keisuke is your typical childhood friend route, but his route have a twist that's sadly repeated in every single route, making his route completely pointless if you don't care too much about his character. Nano's route had a good start, but guess he was a bit too detached for a medium length game, so his development was way too rushed in the end. Shiki's route is a complete disaster that I'll talk about in the H-scene part of the review, because his route barely had anything else. 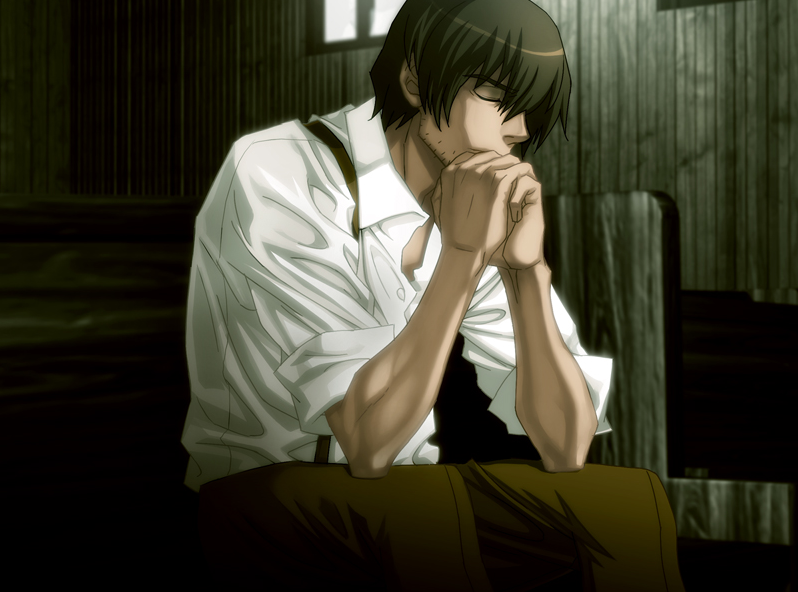 The h-scenes... sigh. There's eleven scenes in total, and only three aren't rape. And they aren't even dubious consent scenes, it's no consent whatsoever. And most of them are totally gratuitous. There are more routes than consensual h-scenes, so... you know what to expect. I could actually forgive such a ratio if this was some dark and dramatic story. It's not. It's the actually the same annoying BL cliché that plagues a lot of older works: rape turned love. Guy A forces himself on guy B (usually the MC) because "he can't express himself very well". But no worries, because the rapist liked the other guy all along. And the one raped can see beyond the abuse, guy A have other worthy qualities. And then, happy couple ending~ Aaaaw, can I vomit already? I mean, what? How can they even call that romance??? I know the game deals with some dark themes, so the least they could do is treat it with seriousness and not like some "cute" shipping material. Although this description here fits mostly Shiki (except one of his bad endings, that actually depicts some sort of mindbreaking), there's one more character that had a rape scene that came completely out of nowhere, for no real reason and it so happened to be the only h-scene of the route... My headcanon is that one of the "drugs" (drugs are never named in those media, huh?) they use actually turns them into rapists, but who knows the right answer.

And when that's not the problem, we have the unnatural dialogue. "But we're both guys!", oh I didn't even noticed, thanks for telling me! "I don't like guys, it's just you!", he's a guy regardless, give up. "I don't care if you're a guy, you have a pretty face!" (actually this particular quote wasn't in a h-scene, but in a rape attempt scene) I thought that was the norm for BL MCs, how is that not gay? The game really goes out of its way to basically say "NO HOMO!" sometimes... There's so many turn off moments that only positive thing I can say about the h-scenes is that Akira's voice actor do an AMAZING job, one of the best h-scenes voice acting I heard. 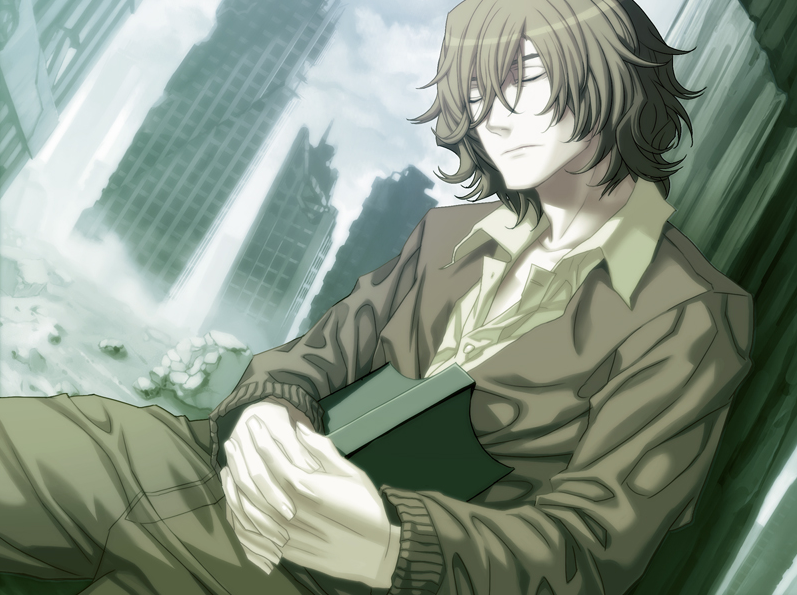 The art is nothing really special. The background can get a bit repetitive with so many gray tones, the CGs are good, better than the sprites, the usual stuff. The soundtrack on the other end is pretty good, enhancing various okay moments to something cool. It sets the mood just right, the song that plays in the bonding/emotional scenes in particular had such a lonely vibe, I liked it a lot. And the good ending song is so beautiful I constantly hear it (and I feel obligated to share it).

And, because it's an old game, I had to add one more section to this review: technical stuff. It's a known fact that this game have some compatibility problems with windows 8.1 and 10. Back when I played it in windows 8.1, I had to do several "tricks" (compatibility mode with windows XP, put it in high priority in task manager) to unfreeze the game after loading a save file. I had to change the tricks (clicking in specific points in the screen, don't ask why) to play it in windows 10, but after some updates it's now completely unplayable for me. Some people had more luck and said tricks still works, others never had any problem, but are you feeling lucky? Nitro+CHIRAL released a new windows 10 compatible version, but, as you can guess, you can't use the english patch in this version.

Another way to play this game is grab the all-ages PS2 version that even added a new route. Even then, I couldn't really bother with reading this again. It's storytelling is so outdated and filled with bad BL stereotypes. But unfortunately there's so few BL translated that this became some sort of mandatory reading.