I finished this game the other day, and decided to write up a short blog post on it.

Ryuukishi Bloody † Saga is the "sequel" to Akabei Soft3's Ryakudatsusha no Inen, (though the only relevant connection is the main character, and it pretty much works as a standalone game tbh.) The game completely breaks away from the dark nukige-like feel the first game had, and shifts the genre completely into something rather light hearted. (Though it has some rather gore filled fight scenes here and there.) The art even changes completely, making it feel like a totally different game.

I made a post about the prequel a bit back, and the things I felt that game did wrong was handled very well in the sequel, making it blow my expectations away. For those interested in this game who don't like overly dark themed stories and therefore want to stay clear of the prequel, you should be fine playing the sequel only as long as you read a general summary of the first game. (There is a couple of smaller refrences to the first game in the sequel, though nothing major.)

For those interested, I wrote up a summary of the first game here. It doesn't cover absolutely everything, but it gives you the info you need to read the second game.

The game begins with the introduction of a young boy named Roy, and his family. They live a peaceful life, without a care in the world. That is, until a brutal gang of bandits knocks down their door and turns their lives into a living hell.

Sparing you of some of the gruesome details, Roy's father and mother is killed, and Roy and his sister is captured by the gang. His sister is passed around among the bandits, while Roy is given to a sadistic woman named Hamiro, who loves breaking the minds of young boys.

After being "toyed with" by Hamiro and her already mindbroken young slaves, Roy is brought outside to witness the murder of his own sister. She is tortured to death before his eyes at the command of the gang's leader.

One would think all of this should destroy Roy's mind, but instead he refuses to give in and plots to join the gang and slowly gain their trust, so that he can one day get his revenge and slay them all.

Time passes, and Roy grows up. Though he is still Hamiro's "slave", he never lets his mind falter, and he still plans on taking the lives of the bandits once he grows strong enough.

During the story, Roy falls in love with Hamiro's daughter, Meshia(?) (damn katakana names.) The two of them bond over their hellish lives, and Meshia tries to get Roy to run away with her. Sadly, before they can do anything about this plan, Hamiro decides Roy needs to realize his place, and has Meshia drugged and raped as Roy listens from the other side of a barricaded door. When he finally makes it into the room and murders everyone inside, (including Hamiro who simply laughs at the spectacle like the true monster she is,) Meshia is beyond saving. Roy reluctantly kills her, and the last thing she does is mouth the words "thank you."

Enraged, Roy seeks out the leader of the bandits and fights him. Although he almost loses his own life in the struggle, Roy manages to kill him and the game ends with Roy simply standing still covered in blood, asking himself... "what do I do now?"

The sequel begins a while after this, and Roy has seemingly found a new purpose: pursuing his father's occupation. (A herbalist(?) Is that the right word? He collects all sorts of plants, makes medicine and stuff like that.)

Bloody Saga starts off with Roy walking through the forest without a care in the world, headed for a city called Veludylun. However, on his way there he notices dark smoke rising from within the city walls, and he is stopped by a group of knights protecting the entrance. The city is in a state of emergency, as a massive dragon is attacking. This is apperantly not the first time this has happened, and as mortal weapons cannot harm the dragon because of its tough scales, the best the knights within the city can do is distract the dragon long enough until it leaves. 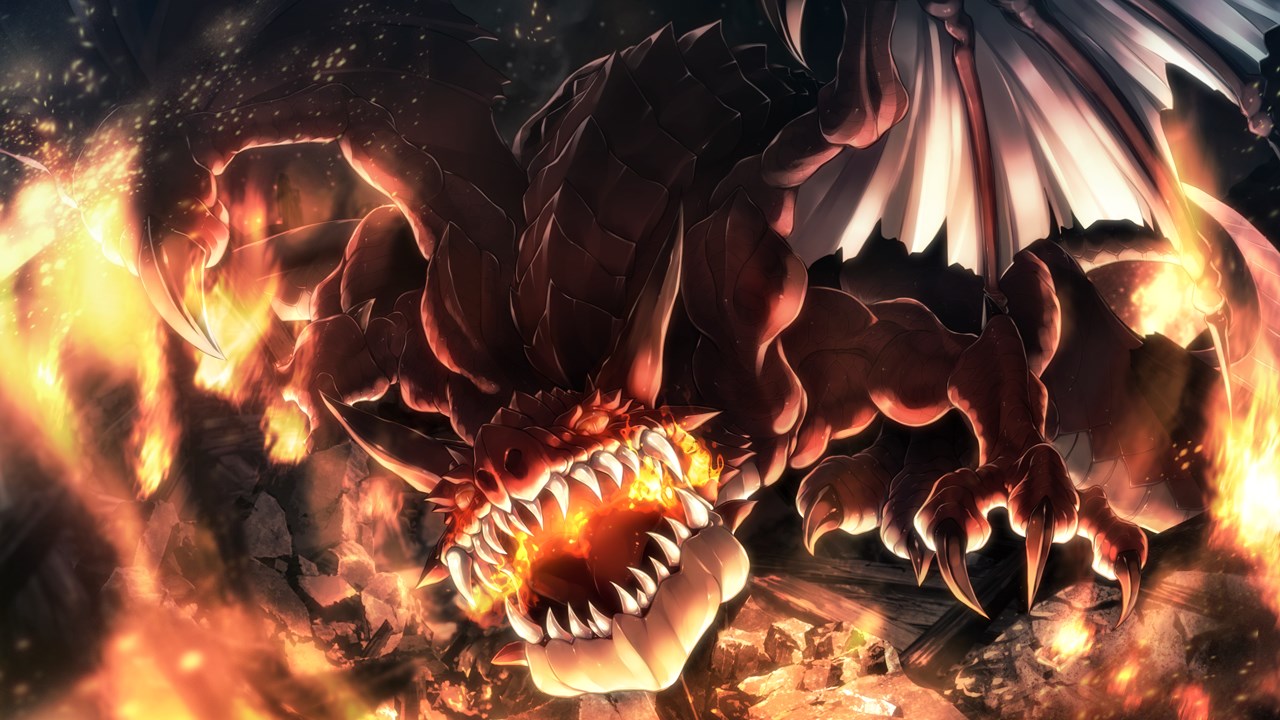 Seeing the people of the city in dire need of help, Roy volunteers to help out with taking care of the wounded, as well as rebuilding the parts of the city destroyed by the ruthless dragon's attack. Keeping his dark past locked away deep within his mind, Roy starts a new life in Veludylun. He befriends four female knights, (who were originally selected by the king as "guards" to keep an eye on the outsider,) and together with them he spends his days helping out rebuild the city, uncertain when the dragon will attack next. 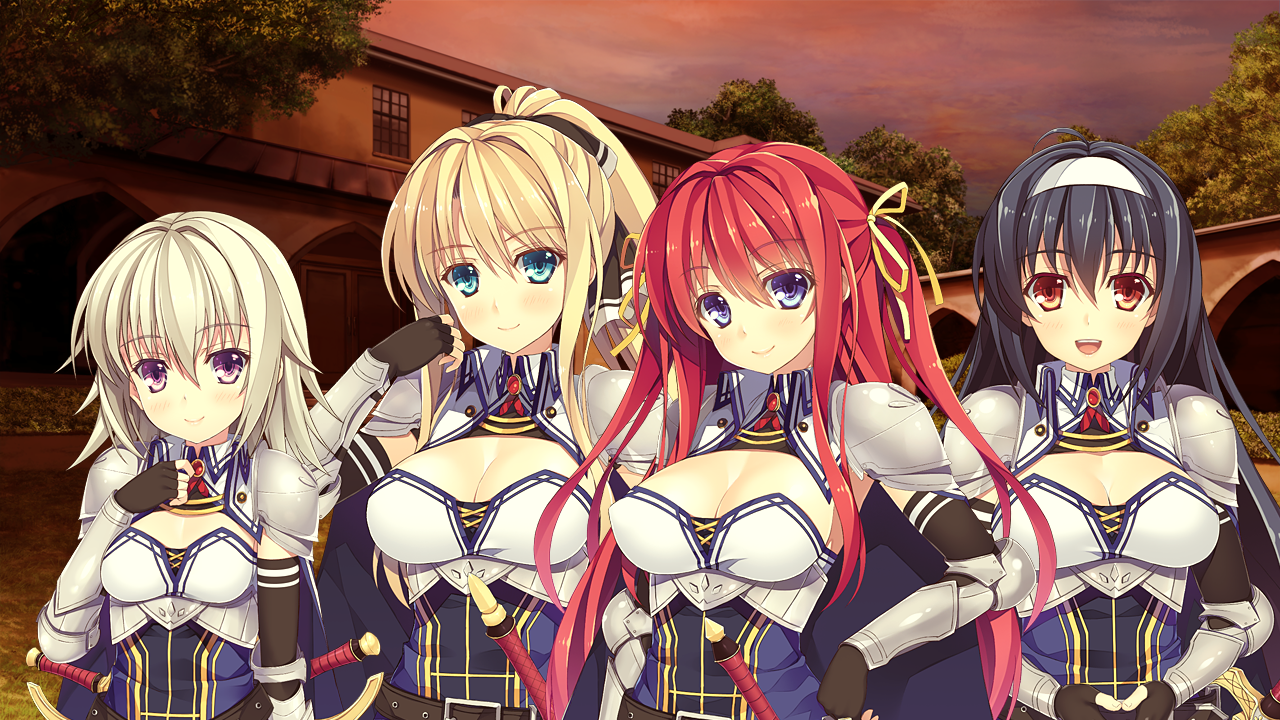 The story of the game is nice, although it takes a bit of time for it to pick up. The slice of life moments are more than welcome though, as they don't feel boring at all. (At least not to me.) The heroines are great, and Roy is a fantastic main character. The villains are also well made, and the fight scenes are for sure one of the best aspects of the game.

I haven't read too many serious harem stories so I don't have many games to compare it to, but this one pulls it off very well. All the heroines gets enough screen time, they all have their own reasons for liking the MC and the harem doesn't feel forced. (My only complaint is the high amount of H-scenes... they really didn't need that many. 2-3 for each heroine would be fine, but instead there is like, 6 per heroine which is just a bit too much.)

Bloody Saga is an entertaining fantasy VN with good writing, epic action scenes and a decent amount of slice of life moments with the heroines. There is a good amount of focus on the romance between the MC and the knights, but enough weight is still put on the core story so that it doesn't become your standard charage love story. The setting and time period in which the story takes place is also a nice break from your standard VNs, and the voiced protagonist + the stunning art just makes the experience more enjoyable. Although the game has its darker moments, they fit into the story very well, and aren't sexualized pointlessly like in the first game. Overall this VN is a very enjoyable read, and I strongly recommend checking it out.