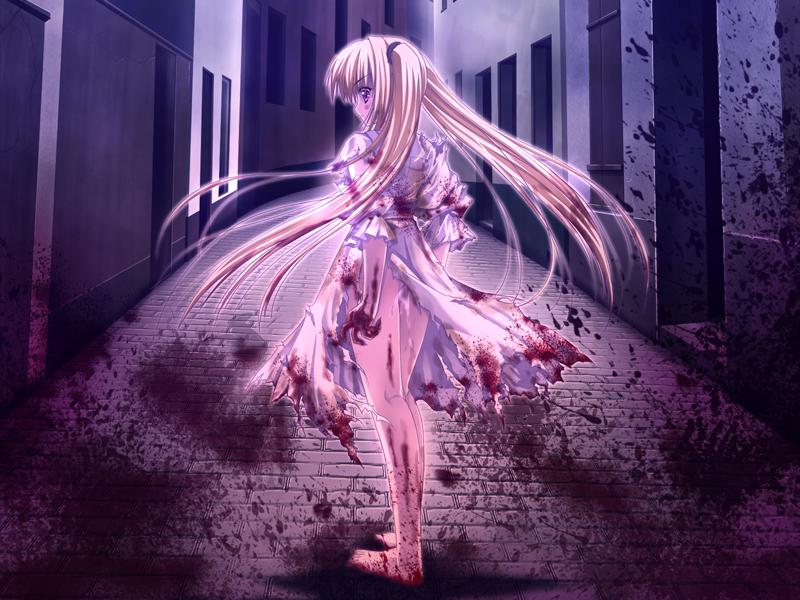 I'll say it straight out... in my mind, Draculius is one of the top two vampire VNs in existence... with the other one being Vermilion by Light.  Meromero Cute was a company that had a tendency toward making... eccentric works.  Mahou Shoujo no Taisetsu na koto is particularly memorable for the cross-dressing protagonist who spends a ridiculous amount of time being reverse-raped in a magical girl costume...  It used the fact that nobody expects mahou shoujo stories and settings to be consistent to go a bit crazy...

Draculius is a bit different... the protagonist, Jun, is the kind of guy who would be a hero in an otome game.  While he isn't voiced (a mistake in my mind, but one that is common) his narration and lines have so much personality that you never see him as a 'standard' protagonist.  There are precisely two paths in this VN... a 'joke' path where Jun doesn't make the full transition to a vampire during the story (focused on Rian and Zeno), and a true path, where Jun confronts the people hiding behind the curtains in the course of building his vampiric harem of a trigger-happy tsundere vampire-hunting nun, an ancient vampire who was once his father's vassal and lover, a vampire 'ojousama' whom everyone takes joy in teasing, and a loyal werewolf maid who makes  a hobby out of tricking her mistress into making a fool of herself.

The action in this VN is actually a bit above the standard for chuunige of the era, though it doesn't match works by Light.  At times there are battles of wits, and there is enough comedy to make a lot of modern charage seem boring.  To this day, I've never met a loli in a VN that matches Belche for characterization (yes, I include stuff by Favorite).  The multitude of roles she takes on and the layers to her personality and viewpoint on life make her one of the few 'ancient heroines' who doesn't seem in the least bit fake.

One of the things that is most important in a vampire story of any type is the perspective... to be blunt, a vampire setting where the vampires don't drink blood or are fundamentally harmless is... boring, to say the least.  Vampires in Draculius are nothing of the sort... in particular 'Seconds', vampires made from humans, can only turn humans into zombie-like Roams (and can potentially do so just by biting someone), so vampirism is actually a legitimate threat.  Firsts, like the protagonist and Rian (also called Shiso, like the True Ancestors in the Tsukihime world), don't have any of the vulnerabilities of their servant vampires... and they can make vampires that are sane.  However, most Firsts perspectives are... warped, to say the least.  There is nothing worse than a justified sense of superiority to make people insanely arrogant, lol.

The actual story of this tilts back and forth between the more absurd slice-of-life and the more serious parts, but this is one of those rare VNs that manages the balance nearly perfectly.  People die, the protagonist kills, and the enemy is ruthless (as is Belche, lol).  However, the slice of life in this VN tends to serve as a bright and amusing contrast to the darker elements, keeping it from becoming a purely serious VN.

Overall, replaying this VN has confirmed to me something that I had more or less guessed over the last few years... they don't make ones like this one anymore, lol.

Edit: The pic is Belche just after she became a vampire.

Edit2: ... for those who wonder, the h-scenes in this VN... are pretty unique.  Most of them switch between Jun's and the girls' perspectives...