Beat Blades Haruka is a gameplay oriented nukige released by Alice Soft, which was recently translated and licensed by Mangagamer. The game offers 150 H-scenes, ranging from normal vanilla scenes to darker things like rape and beastiality. The game's appeal is clearly rooted in it's H-content, but does that mean that's everything the game has to offer? 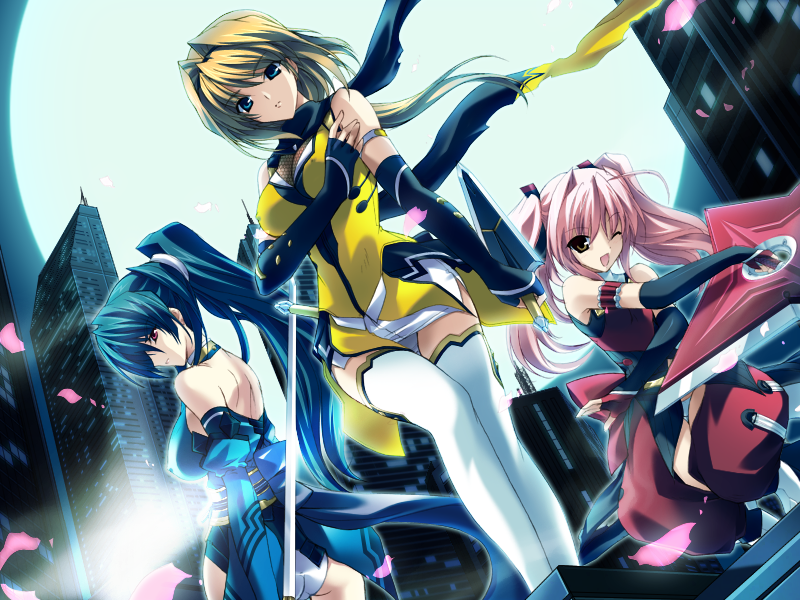 In Beat Blades Haruka you play as Ikusabe Takamaru, a boy who desperately wants a girlfriend. His friend, Narika, keeps getting in the way of his possible romances, something that irritates him quite a bit. But soon, his fairly normal life of being rejected by women and half-assing himself through school quickly comes to a halt when the beautiful ninja Haruka, who has traveled to our time from the past, suddenly appears in Takamaru's life.

Chasing the evil Noroi who has lept through time with his follwers in order to turn the world into chaos, Haruka and her fellow Cresent moon members turn to Takamaru for help. It turns out, Takamaru is a descendant of the Dragonian, meaning he has the power to transfer strength to the blades of the crescent moon. (The blades being female ninjas.) This power, SP, is transfered from the Dragonian to the blades by ... Having sex.

Takamaru's mission is to use the blades at his disposal to fight the four Tetra Sealers, Noroi's most powerful subordinates, take down the towers which connect to Noroi's realm, and to stop him once and for all.

During the game, the player gets a whole lot of choices that will allow them to take full control of their destiny. Will you be the good guy, fighting to stop Noroi? Or will you give in to your dark desires, using the blades as tools for your own pleasure and gain?

Offering a large variety of different endings, Beat Blades Haruka is a very unique gameplay nukige that allows its player to choose a lot more than just a singular ending, but they have the ability to impact the very way the entire game is played. 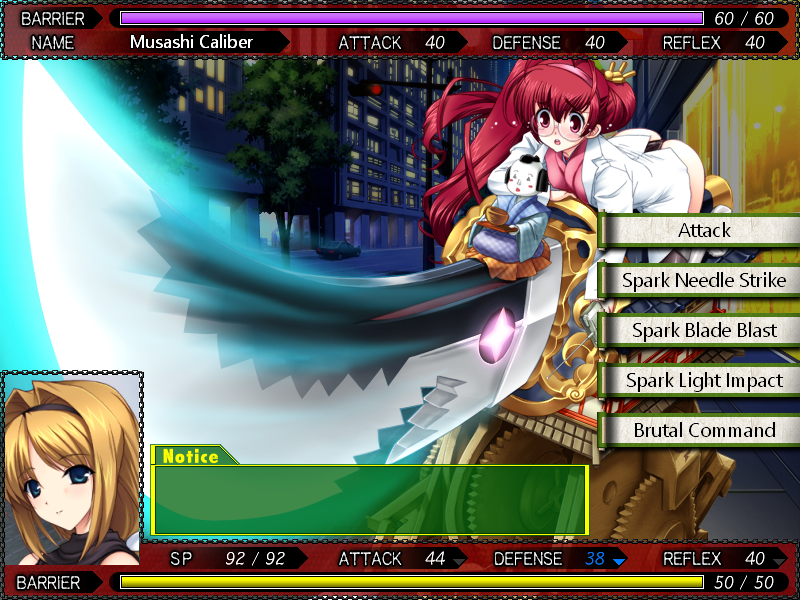 During the story, a big part of your time will be spent preparing your heroines for battle. During the gameplay parts of the VN, you will be matched up against an enemy. You can spend SP, (sex power), that you accumulate through dragon syngery, (sex), to unleash powerful attacks against your opponent, and you train your heroines stats through either dragon synergy, training, castle raids or defeating enemies. The lower your stats are compared to your opponent, the harder it is to win. The stats highlited in blue, like the defense in this picture, means the stat is underleveled compared to your opponent, and the chances of winning are smaller. By losing a fight against a male Kainin, one of Noroi's lieutenants, the heroine will be raped and an option to skip the following rape H-scene will appear. (Unless you disable that feature in the option menu.)

The gameplay is entertaining, though it is a little difficult at first. Getting used to what all the different stats does is a little bit hard and overwhelming, and the stats are also a little poorly balanced. For instance, by stacking a large amount of reflex, you will be able to sweep through the game, as your character will essentially never miss, and she will also dodge a lot of the opponent's attacks. But if it's the other way around, and your reflex stat is low but your other stats are high, you still wont do much damage, as most of your attacks will be dodged. Basically, there is too much focus on reflex, something that makes combat a little bit imbalanced at certain points in the game. Your opponents gets really strong in the late game, meaning their reflex stats are high, and so if you didn't train your heroine correctly, a bad end is waiting for you. (If you are defeated by a sealer, you get a bad end and a game over.)

Still, these flaws aside, the gameplay is enjoyable. It's fun training up your heroine, either choosing to clear out the streets to protect the people like the good guy, or simply being an asshole and having your heroine raped over and over. (This increases her stats a great deal, however it gives you + brutality, and if the heroine is raped too much, it can lead to a brutal bad ending.) The variety offered to you makes playing the game a second, third or fourth time fun. 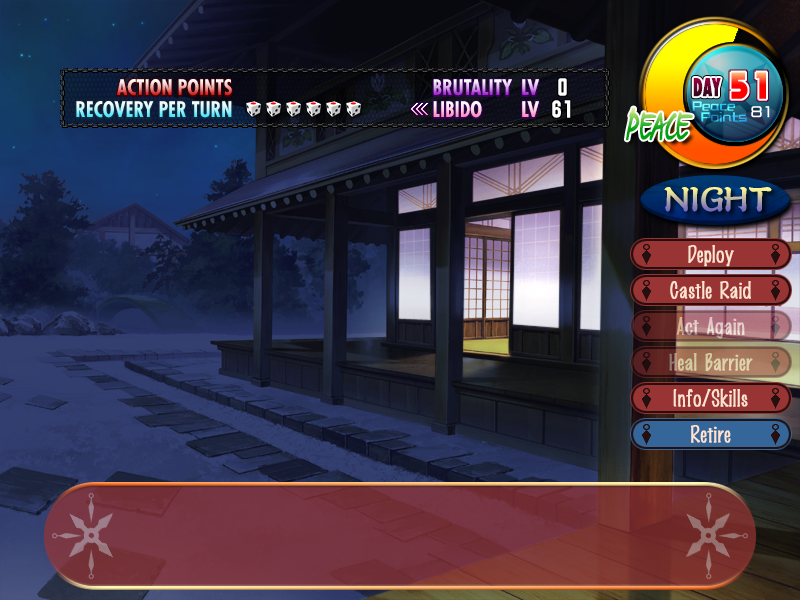 The phase system, Libido and your dice

While we are still on the gameplay part of the VN, there is a few things to note. The game itself is split into four parts, 3 phases and then actual story. The 3 phases are morning, afternoon and night phase. Between these phases the game's story progresses, and you see normal VN style dialogue as well as choices that you can use to impact the story, as well as your heroine's stats.

During the morning and afternoon phase, you either train up your heroine by having sex, raise your libido or rest, in order to get more dice recovered. The night phase is spent actually fighting your opponents, and going on castle raids.

(What exactly are these dice and how do they work?)

The dice system in Beat Blades Haruka is what let's you make your "moves" in the phases. You get X amount of dice each day, based of your dice recovery. You can have a maximum of 8 dice at a time. The dice can be a number between 1 and 6, and the dice itself is used to "pay for" actions. As an example, if you want to sleep with haruka to increase some of her stats and her SP, you have to "pay" some dice. The lower levels of dragon synergy are cheaper, but give less stats, the higher levels are more expensive but give you more stats. The system is very forgiving. If you roll a 7 on something that needs 8 to complete, 7 will be subtracted from the action, so that in the next phase, it will only cost 1 dice. The dice itself is based off RNG, though do note that it is essentially impossible to soft reset for. Still, with the way the system is made, soft reseting for dice is not even needed, so there is nothing to worry about there. If you do it right, completing the game in the 99 days given to you is a walk in the park.

Lastly, libido is a strange stat. It is what makes your dice recovery higher. Every 10 points of libido, your dice recovery goes up by 1. What does this mean? It means that after the night phase, you will get back X dice. So if you have a dice recovery of 5, the next day following a night phase, you are given 5 dice. Raising your libido is simple, and is done by either having sex with a female Kainin, choosing an option at a choice screen with (libido) next to it, or just clicking "raise libido". 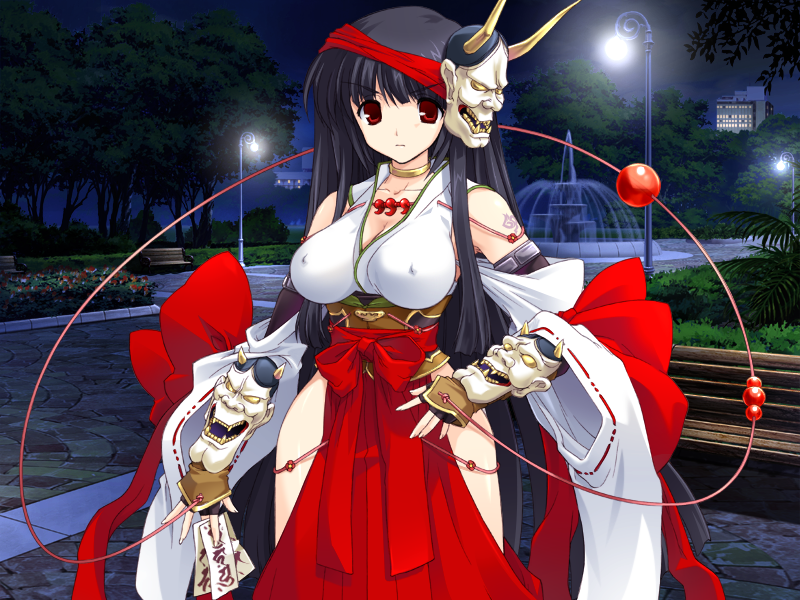 The game's value beyond H-content?

We have already talked about the gameplay side of the game. It's entertaining, though very repetative and it's also focused strongly around H-scenes. (In order to prepare your heroine for a battle you have to have sex, and if you lose a battle, you get into a rape scene. H is a big part of this nukige, obviously.)

But what about the story itself? Music, art, characters and such. What is the value of the game outside just the H-scenes?

The character designs and art in the game is overall very nice. A lot of work seems to have been put into each character's design, though the personalities of the the main characters are fairly bland and simple. Most work seems to have been put into the kainins and tetra sealers. They are all very badass, pretty, hot, what have you. Each one of them has many small details that stand out, and are just overall very well made. The main characters are by no means poorly designed, but in comparison they do fall a little short.

The art itself is very nice, with animated cut-scenes, well drawn backgrounds and detailed character sprites.

The music in the VN is pretty good, offering a variety of tracks for different situations that fits well with the atmosphere of the scene.

The story itself is what it is. The game does take itself seriously; it's not like it just jokes around and put all focus on H. The story is decent. There is moments where it will take you by suprise, certain moments that are more emotional than others, though the actual story is fairly short. The main focus of the dialogue aspects of the game lies in the different scenes you can get with the heroines and side characters by making choices. If you focus on one girl a lot, increasing her love hearts in the game, you will go on dates with her and get close with her. If you are an asshole and just have your blades raped and defeated, you will get unique scenes that deal with this.

The actual main story that remains the same through all playthroughs is therefore minimal, as the game wants to keep the focus on your choices as the player. This is both a flaw and a strength in the VN. It's a flaw because it means that ultimately, the story itself is slightly underwhelming and short, but it's also a strength because it does mean the player feel like he or she is more in control of the outcome.

All in all Beat Blades Haruka is a solid VN, offering unique and entertaining gameplay, a big variety of choices that lets the player impact the game's ending, though it does lack some impact in its delivery of the story.

- The stat system is a little imbalanced