Hello hello! I have spent the whole day no lifing this game and now its time to make a review of it!

Just like the last game, Nekopara vol. 2 is a rather short kinetic novel, (about 4-5 hours, depending on your reading pace. Maybe a little longer if you listen to all the dialogue.) It has very nice art, animated sprites, animated H-Scenes and ... nekos!

Starting off after the ending in vol.1, all the catgirls in the Minaduki-family are now working at La Soleil. So far the MC, Kashou, has conquered two of the six. How long before the rest of them fall for his incredible ... Baking ... Skills? 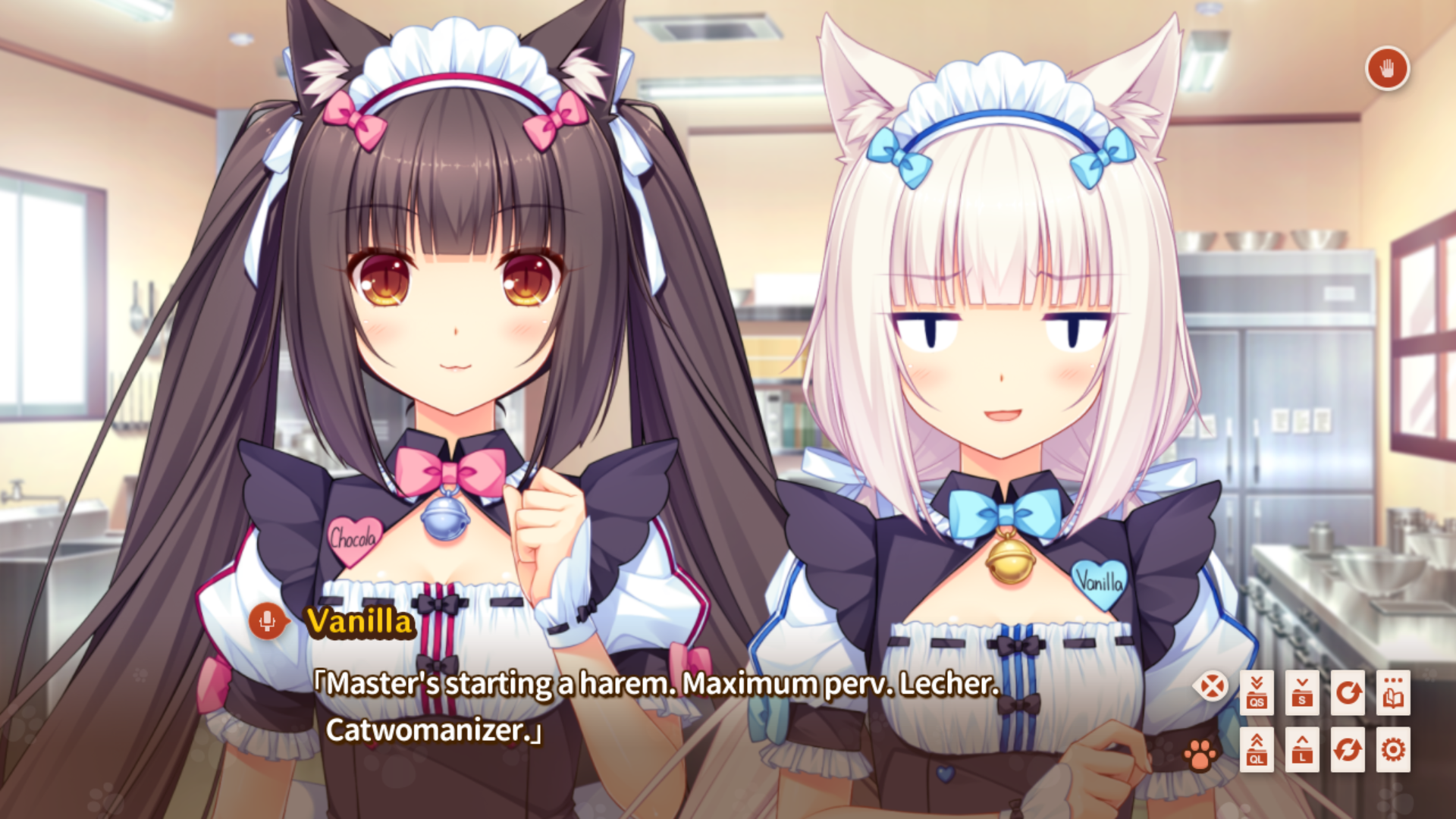 So I went ahead and added a question mark there. Don't take this the wrong way; I am not saying the game is bad and that its completely devoid of a story, but let's face it, this game is primarily about looking at the pretty nekos naked.

Its very strongly built on the slice of life type element, literally just showing the life of everyone at La Soleil as they do their best to keep the now very popular bakery running. It's pretty much a moege / nukige, depending a little on how you want to look at it. (I guess if you play the all ages version, its just a pure moege ..

In Vol.2 the two catgirls Azuki and Coconut are our new heroines (two of my favorites, so that made me go hell yes!)

The story starts with Coconut being extremely clumsy like always, and therefore she ends up very dejected. All the other nekos have a job they can pull off well in the bakery, but all Coconut can do is lift heavy stuff. She breaks mugs, gets in the way and just generally doesn't do much productive work.

Azuki on the other hand has taken the role of the leader among the nekos, and with her being the oldest of the lot, it was a rather natural role for her to fill. Coconut and Azuki constantly get in fights, something that makes the relationship between the two kind of strained.

Eventually Coconut wants to get some special training from Kashou, so that she can do better at work and finally have her onee-chan compliment her.

Meanwhile, Chocola and Vanilla has to go take another test in order to keep their bells. The bell test was something they both struggled with originally, especially Chocola, so it's something that could end badly. Will they manage to keep their bells, or will they be forced to go through the process to get them back all over again?

The story basically continues in this pattern from here, though if I say any more, I'd basically spoil the little story the game has. Therefore, let's leave it there.

All in all, for me the story was quite enjoyable. It's extremly light hearted, and I knew that as I started playing it, obviously. It has a few moments that is kind of touching, and others that are really funny.

Really though, it's nekopara; its short, you wont get an incredible amount of story, but you sure as hell will be entertained by the little that is there. (Unless you don't like nekos, but if thats the case, you are a sad human being

What about Chocola and Vanilla?

When I started playing, this was a question that was in the back of my mind. Will the new heroines simply replace the old ones? Well the answer is, no!

Of course the new nekos have a bigger role in the story overall, but both Chocola and Vanilla are still present more than enough. (They are in fact, in every single H-Scene.

On the note of Vanilla and Chocola, their part in the story with the bells is rather small, but they are present during most of the story scenes featuring Azuki and Coconut as well, but more as background characters. 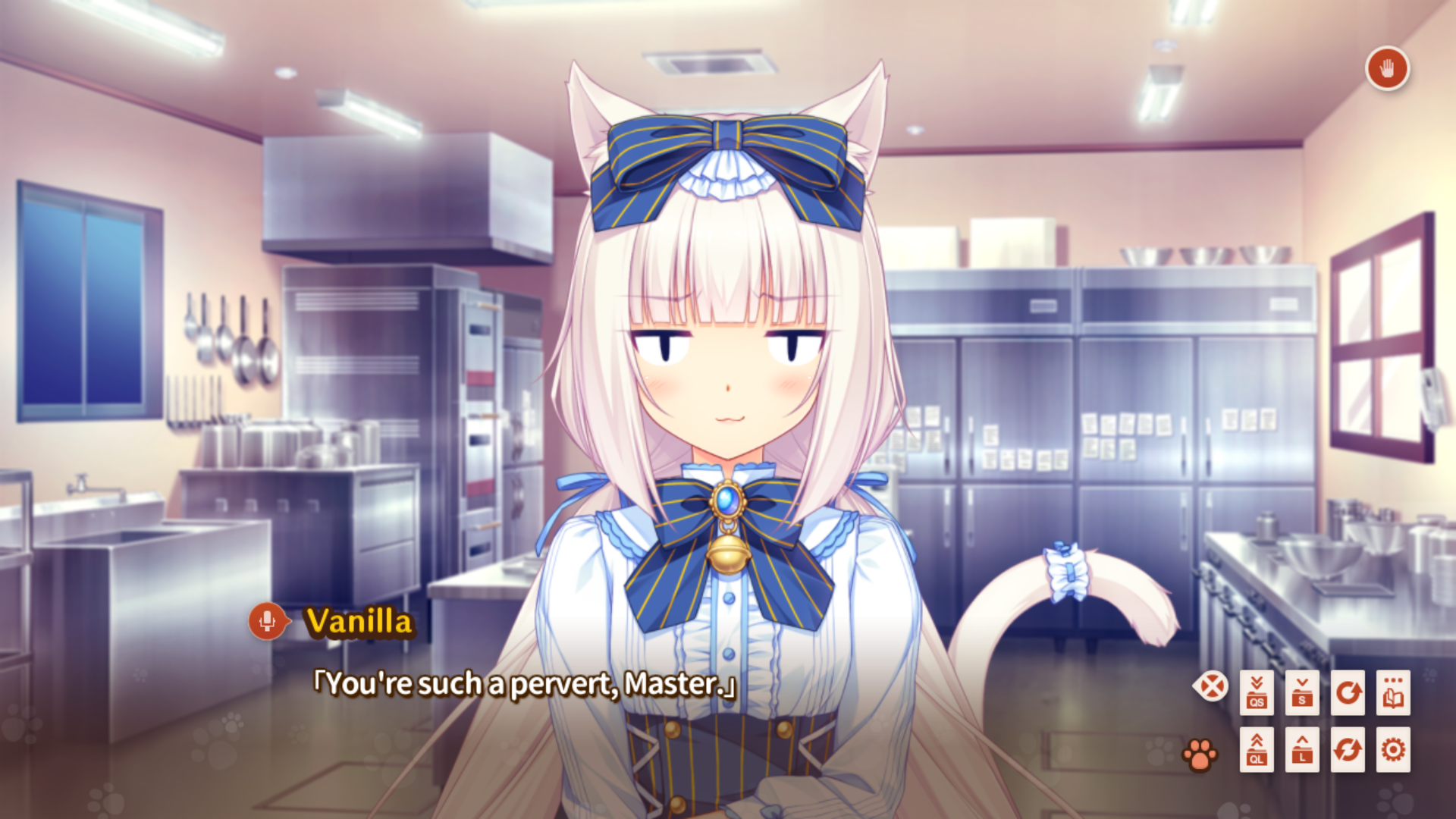 Another thing I was wondering was; are they going to make any improvements to the game at all? I didn't really have anything specific in mind, but the main concern I had was: is this literally just going to be a copy paste of the first game, but with new heroines?

Luckily, it wasn't. I mean, of course we are in the same setting so there is re-used backgrounds, the music is somewhat the same and the art itself hasn't been changed significantly. It's not like they have made any big changes that we can see, but just in a general sense, the game itself isn't the same as the first one.

First of all, the new heroines both have different and unique personalities that makes the little story aroud them interesting, and it also spices up the H-Scenes so they don't feel like they are just re-used with new characters.

Also, the story starts of like the polar oposite of the first game, with Vanilla and Chocola already being involved with the MC. We see a little part of their daily life, and how the other nekos are around them when they "get funky". (And example being Coconut walking in on Chocola and Kashou when they are making out.)

So although the feel of the game is similar, its not a lazy copy paste kind of game. I was a little dissapointed to find out that no new elements, such as possible choices or a new fun function like when the petting menu was introdouced. These are fun little things that would make the game even more entertaining.

An amusing thing that happened during the story was when the two remaining nekos went ahead and kind of broke the fourth wall, saying "if this pattern continues, will it be our turn next?" 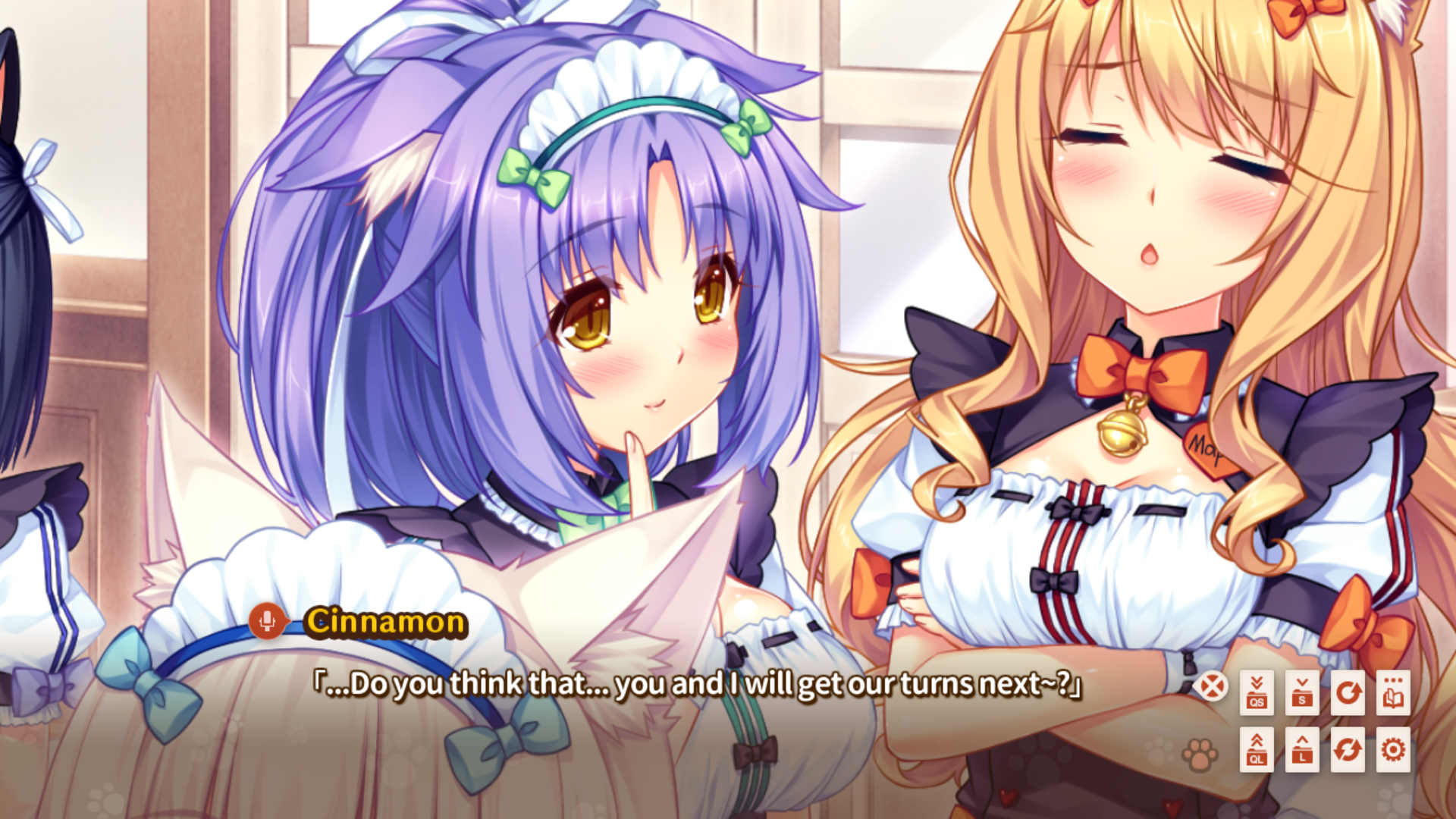 Nekopara vol. 2 is rather short and you shouldn't go into it expecting a very deep story. It's very light and full of moe. Luckily the game itself isnt a copy paste from the first game, though I wish some new elements were introdouced. Hopefully the possible next game will have something new in it, like a small choice or something else that spices the game up even more.

In order to avoid a bunch of people getting weirded out by a subjective rating, I'm going to say this: If you liked the first game, you are definitely going to love the second one! If you didn't really care for the first one, then this might not be your thing. Of course, if you have a thing for Heterochromia heroines, then the game might be worth it just as a nukige. Coconut sure does look ... S-Smart

Yes, lets go with that.

What, were you expecting a serious number?

Thats it for today, thanks for reading. Now go play this thing!