So before I start, I don´t really know if this can go up on fuwa review or not so ... I´m just posting it here in the same format.

If anyone know if it can be moved over there then that would be cool. Anyways, on to the review:

Yosuga no Sora is one of those games that a lot of people might judge before actually giving it a go, due to its nature. Maybe you heard rumors, read a negative review or an angry comment about it. Either way, there is a lot of negativity surrounding the game, and I hope that by making this review, some of that will go away.

Yosuga no Sora is a slice of life romance visual novel by Sphere. It tells the story of the two twins, Sora and Haruka who just lost their parents in a car accident. In order to leave behind their painful memories, they seek a new beginning in their old childhood town, all the way out in the country. Upon arriving in town they are reunited with old friends and make new ones. The story starts of fairly simple as a slice of life romance comedy, but slowly evolves into more of a dramatic love story touching on some controversial topics like incest.

Similar to a lot of popular VNs, it is in a school setting with romance and comedy as essential components, though its unique aspects does make it quite enjoyable despite this. 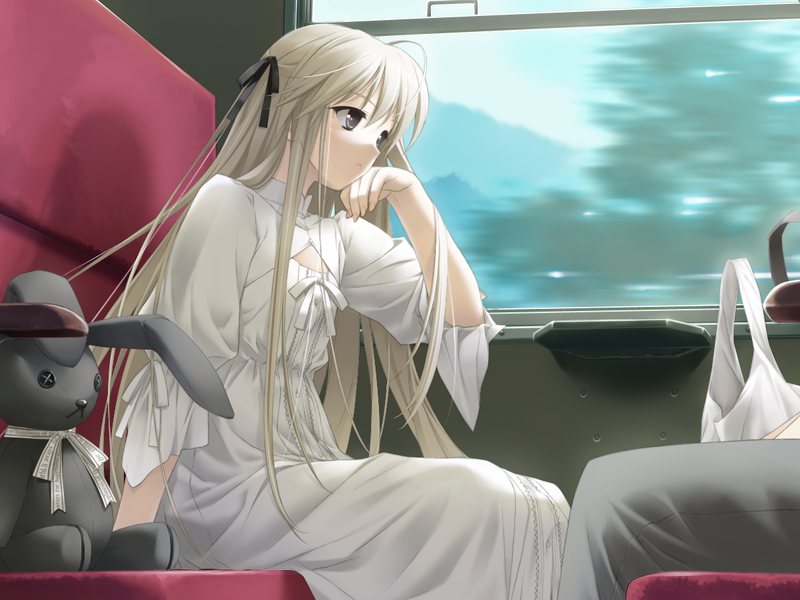 My initial reaction when starting the game was that the music, backgrounds and the art itself is all pretty good. The music slides nicely into the background and doesn't feel disruptive or too repetitive. It´s nothing phenomenal, but it is by no means bad. The art is nice, especially considering that the VN isn't exactly new. One thing that annoyed me was the text box. Often the text will be too long and it will force you to scroll down, making it hard to read, especially in auto mode. This is of course not a big problem, and its primarily only a problem for the English parts, not the un-translated parts of the game. Still, it's a small annoyance. Other than that, the menu and the interface is ok, but does feel a little jumbled at times. The English titles on the menu is essentially unreadable and so you have to either read the katakana/ kanji or get used to where the different options are. 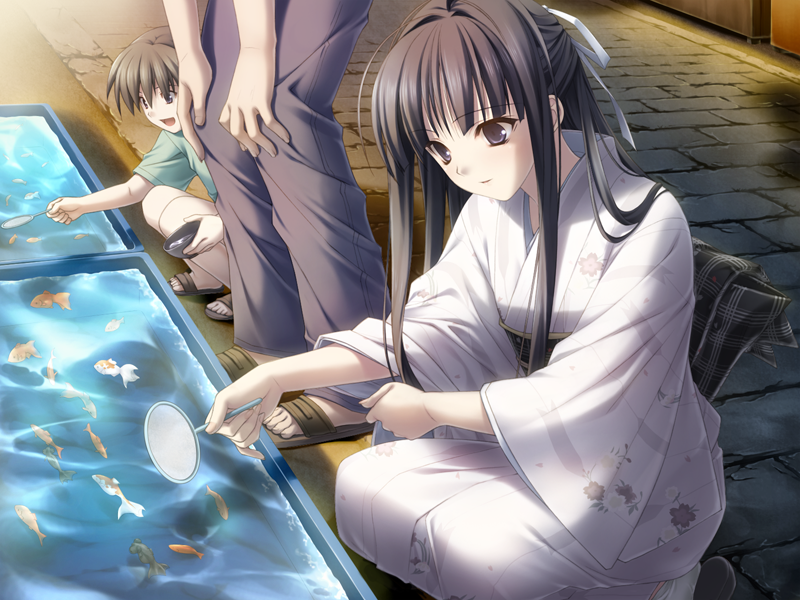 The game consists of 5 heroine routes, but one is on a different level from the other 4; that being Sora's route.

This is where I feel the novel loses a little potential. The story is clearly supposed to primarily be about Sora and Haruka, and this reflects clearly even in the routes where Sora isn't the main heroine. Now don't get me wrong, I'm not saying that the other characters don't deserve a route. All five of the characters have their merits, and all five routes are fairly enjoyable, but I feel that the difference in quality is quite noticeable between Sora's route and the other 4. Another thing that disappointed me was the way choices was handled in the novel. You get 5 choices during the story, and basically, the only thing they do is let you choose what route to go into. Meaning, choices have absolutely NO effect on story, CG, endings etc. Like I mentioned, this novel does touch on some controversial topics, and is quite dramatic at times, which to me says that it would be logical with choices for the player to make during the story that impacts the ending, but instead all you get is one story and one ending for each route.

That being said, the characters is a big plus for me. They are colorful, diverse and work very well together as a group. The most fun part of the common route and for lots of the slice of life parts of the character routes is definitely "double Akira" and their shenanigans. All the characters do get some screen time even outside their own route, though for the supportive characters like Yahiro and Kozue (the class president), you get a lot less character development. Yahiro only really has a purpose in Motoka's route, (which is untranslated) and class rep really only exists to bring some drama in primarily Sora's route. But overall, the characters is a big plus for this novel.

The five characters that gets a route is:

Sora, Harukas twin. Will mention more about her a little later, but she is a fairly standard tsundere character with a powerful emotional connection to her brother. (Translated.)

Kazuha, Harukas classmate. She is an oujosama, being the daugther of the most influential and powerful man in the little town. She is strict and a little uptight, but she is really cute and a very likeable character overall. (Translated.)

Akira, another one of Harukas classmates. She is the oposite of Kazuha in that she is laid back, highly energic and doesn't care too much about rules and such. She is easily influenced by Ryouhei, or "ryou-nii" as she calls him, and the two form the infamous pair of troublemakers, "double Akira." (NOT fully translated.)

Motoka, Kazuha's maid. "The older woman route". She is a really funny character. Actually quite clumsy and impatient, she is the last person you'd think of as a maid for a rich family. The two sides of her personality makes her really interesting and funny. Sadly her route, which is the best outside of Sora´s in my opinion, is untranslated and so you´ll have to pull out some text hookers etc to read it. Parts of it is translated, but this only accounts for about 40% of the route. (NOT fully translated.)

Nao, the "onee-san", Haruka's upperclassman. Haruka has known her since childhood, as they were neighbors when Sora and Haruka spent time in the town in the past. Their past is slightly complicated, though they quickly hit it off again when Haruka returns to the town. She is a character you either find really annoying or one you end up really liking. Sadly, for me, it was the first one. (NOT fully translated.) 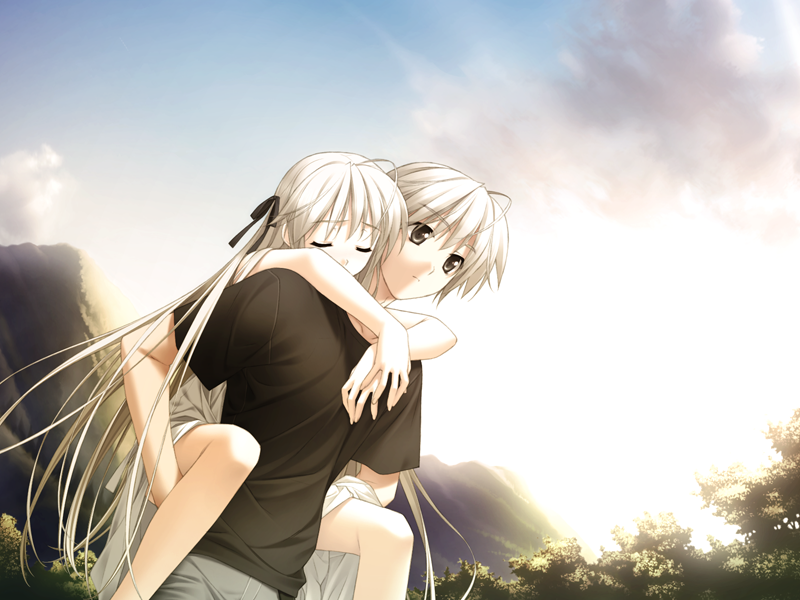 Back to the story. Like I mentioned earlier, the story is about Haruka and Sora settling into a new town after their parents passed away. Now, Sora is very shy and not very sociable. The main reason for this is that she spent a very large amount of time as a child in a hospital due to her weak immune system. Because of this, it became Haruka's job to take care for and look after Sora. As the story progresses, we learn more about the pair and grow more attached to them. At times we will see certain scenes from Sora's point of view, and I for one grew very attached to Sora fairly quickly. She is a pretty standard "tsundere" character, but as we see things from her point of view now and then, you see both sides of her simultaneously and this makes for a little bit of a different experience from normal, bland tsunderes. The story maintains a pretty laid back air to it for a while before entering the more dramatic parts. This is the case for all routes, though the extent of which the drama takes control of the story will wary. In Soras, route the drama primarily consists of the two dealing with conflicting emotions, that being the romantic love for each other that they both try to hide and understand, and their love for each other as siblings. Here again the novel kind of lacks a kick in the other routes. In my opinion, Kazuha and Akira's routes doesn't really achieve much in the form of story. They dig out some fairly plain story about Kazuha's parents and the link between them and Akira, but it didn't really move me at all, and it was resolved in what felt like an anticlimactic and boring manner. That being said, their routes are still enjoyable. I very much enjoyed the interactions between Haruka and Kazuha especially, as they are very different people and make for a really adorable couple. Also, the H-Scenes in the novel work well in strengthening the relationship between the characters, and for once offers a non virgin main character in a slice of life romance VN, which is a plus in my book, as they become a little different from the majority of scenes in similar novels. 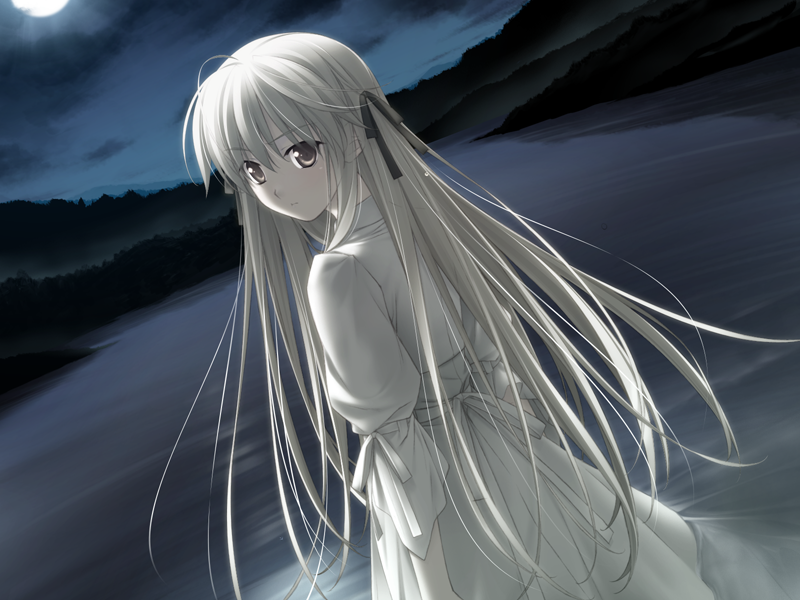 Overall, the VN does a good job in providing the reader with some form of entertainment throughout the entire story. At no points did I feel like I was being bored by the story, though I was rather impartial towards some of the things that happened in some routes that wasn't Sora's. The comedy is enjoyable and the romance aspects are really well done. In conclusion, Yosuga no Sora is a slice of life romance with some unique aspects that become either a hit or a miss. The game offers some drama at later stages of the routes, and even if it doesn't make you feel too much, the nice and cute romance and comedy will at least keep you reading till the end. Sora's and Motoka's routes are the most memorable for me. If you are looking for something deep and heavy, this is not the VN for you. That being said, if you want a romance VN unlike all the others in its genre, this one will definitely offer some unique parts that you won't find everywhere else. Despite some flaws I think this is definitely worth a read, especially for Sora's route.

One final note for western readers, I´ve mentioned it above already but only about 80% of the game is translated, so for some parts of the routes that isnt: Common, Kazuha or Sora,(meaning Motoka, Akira and Nao,) you will need a translation program to read.

+ Nice, colorful and diverse characters that works well both as a group and individually

+ The music, art, CG as well as H-Scenes are all well done and work well together

+ The slice of life, comedy/romance aspect are very well executed

- Many of the routes in the VN, despite being enjoyable, aren't very memorable and the endings feel rushed

- The dramatic, later parts of most routes is poor compared to Sora's route, lowering the overall quality of the VN

Overall I give Yosuga no Sora a 7/10 rating.