I told a couple people I would post my thoughts about Sayonara wo Oshiete when I finished it, and just a few days ago I finished a bad end and Mutsuki's good end. So here are my impressions, thoughts, and analysis of that experience. Also, this post does not contain any significant spoilers to the VN. So its safe for all those that are curious. (Also from here on forward I will refer to Sayonara wo Oshiete as 'Sayooshi')

Before I start talking about Sayooshi, I want to briefly describe the circumstances in which I discovered it. During this past summer, after having studied Japanese (with a grammatical focus) for a while,  I wanted to get a few easy moege under my belt before attempting something I actually wanted to read. I was honestly having a miserable time, as I hate moege. I was reading them for no other reason than to practice and learn Japanese, as they were appropriate for my level. I wasn't having fun, and it honestly felt like work more than anything else. Just as I was about to give up on Untld Vns for the time being, I read a post by Vokoca talking about Sayooshi, and he linked to this video. The unsettling music and ominous imagery instantly piqued my curiosity and I set out to get this VN. For a while I was saving it, still thinking "My Japanese isn't good enough yet", but then at some point in the fall I decided "Fuck it, with the help of dictionaries and text hooking software, I can make this journey", and began reading it whenever I had time. And boy was this a journey worth taking, even if I did proceed through it a bit slowly.

I love the first person narrative because getting inside the heads of interesting characters is truly experiencing the world through a different person's eyes. And VNs in my view are the best medium for first person narration, as they allow you to to see and hear what the MC experiences. Furthermore, back ground music enriches the story by immersing the reader in the moods of various settings and situations. Sayooshi takes all these strengths of VNs and the first person narrative, and uses it to put you inside the head of a madman. A man whose sense of reality is slipping further and further away by the day. The unreliable narrator is a literary trope that I really enjoy, but this is an area where I think VNs by default have higher potential than books. It is one thing to solely read the mind of a madman/untrustworthy narrator, it is another thing all together to see and hear that man's world, on top of reading his narrative.

Too often I see wasted potential in the artistic side of VNs. Visual art is important for not only conveying ideas (i.e. a picture of a hallway should look like a hallway, a picture of a girl should look like a girl, etc.), but art can also convey moods. VNs of the same era usually have extremely similar character designs, and there is usually a lack of creativity in artistic style in VNs. While the character designs aren't anything revolutionary (it is admittedly nice that this VN came out before moe blobs became popular though), what is special about the art, is the eternal twilight. Hitomi's world is a world drenched in the orange and reddish hue of twilight, as the VN takes place exclusively during the evening. And coupled with all the things Hitomi experiences, the color of twilight really makes things even more ominous. It instills a feeling of loneliness, or at the very least detachment. 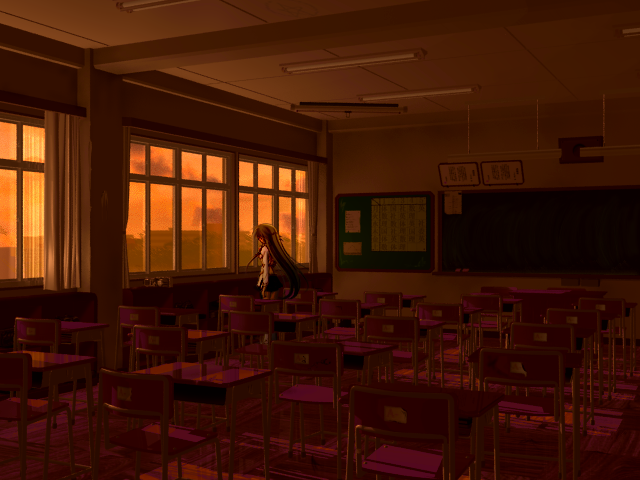 Supporting the artwork in creating an unsettling atmosphere, is the music. The main theme that plays when Hitomi is wandering the school alone (this theme), only reinforces the feelings of detachment that the visual art and writing create. Character themes as well are quite well suited for each of the characters and the moods they represent, further successfully reinforcing the tone of the writing.

Now onto the writing itself. Things are confusing, and they only get more confusing. Any sense of orientation is screwed around with, and this only gets worse as the story continues. You are left thinking "Did what I see actually happen?", until it gets to the point where you just altogether give up on distinguishing reality. In this way, you yourself submit to the insanity and fall further into Hitomi's world. Not knowing what to make of his situation. The only difference between you and him, is that you know he is crazy, but nonetheless identify with him because you experience the same sense of the world as he does. And perhaps weird to say, but the H-scenes in this VN serve to further sympathize with his madness.

When I was telling a (non-VN reading) friend of mine about Sayooshi. He admitted that it sounded interesting, and even could appreciate the use of the H-scenes from an intellectual perspective. But he then told me that what he thought was truly disturbing, was not the use of H-scenes, but that "inevitably there will be people out there that will find it arousing". For him, (and his understanding of what I told him about Sayooshi), the sex scenes, which are exclusively rape scenes, serve to reinforce Hitomi's insanity, and therefore their portrayal is justified. But finding the scenes arousing yourself, is horrific as it is identifying with a monster; like the monster that plagues Hitomi's dreams. But it is here, where I disagree. The VN does everything in its power to have you identify with Hitomi's insanity, and the sex scenes are no exception.

The sex scenes are arousing, despite knowing that they shouldn't be. It isn't just rape, but the Heroines are (supposedly) middle school girls for Christ's sake. Perhaps eroge players (particularly nukige fans) maybe a bit desensitized, but this is certainly fucked up. But just like when Hitomi experiences the dream that plagues him for the first half of the story, he knows he is the monster raping the angel, and there is pleasure still drawn from this. A pleasure that Hitomi knows is horrible and monstrous. But just as Hitomi submits to the role as the monster as he views his nightmare; we are in an identical role, viewing (and partly identifying) with his sexual misdemeanors as he commits them. It coerces you into submitting yourself to the madness of these H-scenes. By doing so an enjoyment is found in them, but for you and Hitomi alike there is a darkness implied in that pleasure. Furthermore, Hitomi seems to understand that he is defiling them. There is a guilt and sense of disgust felt, but also a feeling of extreme excitement, just as we as readers feel. This is shown through the multiple references he makes to 'contaminating the purity of the angel/Mutsuki', to paraphrase what he says. The H-scenes, and our feelings towards them, mirror Hitomi's perspective; furthering our identification with his insanity.

Yet, just like the reoccurring nightmare, the H-scenes almost always end abruptly, and are divorced from continuity. It is not uncommon for an H scene to abruptly happen, end all of a sudden, and the next thing you know you are placed into a completely different context. And not only do the H-scenes lack continuity immediately before and after, but the characters never make reference to it afterwards, and act just as they did before. Further questioning whether they ever really happened. And this confusion surrounding the reality of the h-scenes, makes it easier to identify with Hitomi during them, since the normal consequences and damage caused by rape, do not apply. 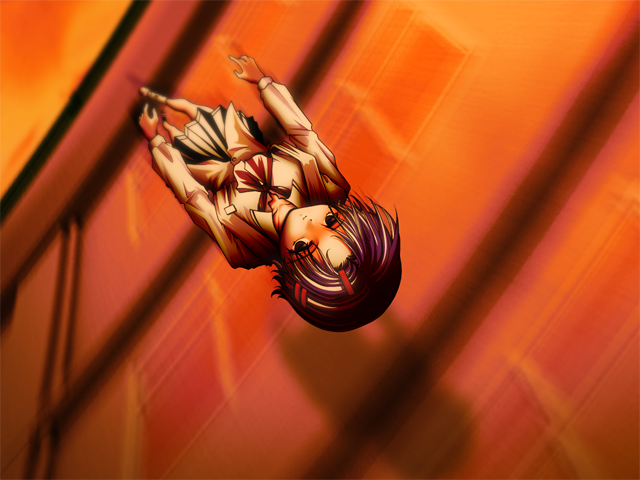 And for all these reasons, I feel that the thesis of this VN is the fragility of the human mind. Often we draw huge differences between the mentally deranged, and functional normal human beings; but what Sayooshi points out is that the difference is actually rather subtle. In seeing the world Hitomi experiences, and sympathizing with him, it gets us to realize that we ourselves are not that different. That given his circumstances and what he experiences (and seeing it through his eyes), his reactions are actually understandable. The atmosphere of his world, and reading the thoughts of his mind, gets us to question his sanity, and in doing so, eventually gets us to question our own sanity as well.

Sayooshi in an incredibly strong atmospheric experience. And it is for this reason that I feel Sayooshi is a great representative of the strengths VNs offer as a medium. This VN took advantage of all the tools it had as a VN (music, sound effects, visuals, and narrative) to provide a full experience of what the wanders of a madman look like. I really felt like I understood to a degree what it was like to be insane reading this work, and I don't think I would have been able to identify as well if it were told in any other medium in any other way.